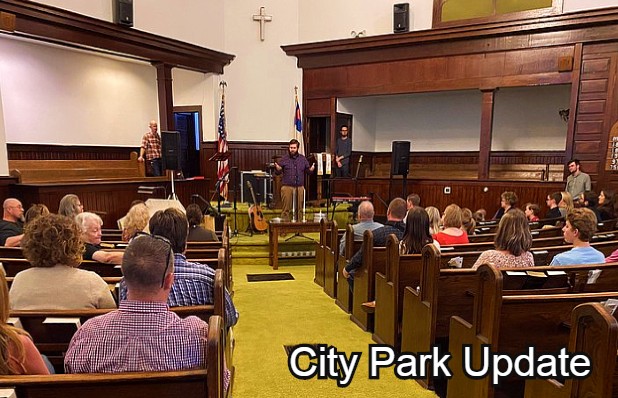 With a few tugs on the belfry rope above them, members Jason and Julie Johnson sounded the bell announcing City Park Church’s arrival in Winston-Salem’s Washington Park Community.

That was Jan. 12 at Memorial Reformed Church, on the corner of Banner Avenue and Hollyrood Street, where 76 people attended City Park’s inaugural Sunday evening service.

Since then, City Park — the first church that Triad Baptist Church in Kernersville has planted — has continued to meet 5 p.m. each Sunday at Memorial, and averaged more than 65 in attendance.

One family from the immediate community has already joined others who left Triad to launch City Park.

No one is more excited with these developments than Campbell, the pastor of Memorial since 2013. At 80 years old, he is looking forward to joining his wife and the church’s associate pastor, Rev. Cynthia Campbell, in retirement on March 1.

Campbell is thrilled with the arrival of City Park because of his passion to see Memorial’s rich history and presence continue in Washington Park. He grew up in the neighborhood and attended Vacation Bible School and other events at the church as a child. He also carried the Winston-Salem Journal and Winston-Salem Sentinel newspapers to area residents.

Originally Schlatter Memorial Church, Memorial Reformed Church began in 1915 as a Sunday school class meeting on the second floor of the Brame’s Store at the corner of Acadia Avenue and Hollyrood Street.

The church building was finished in 1920, and its red oak pews once seated nearly 200 members. Most walked to church from home. 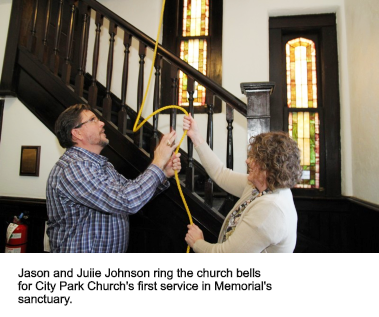 Campbell said that it would cost more than $1 million alone to replace Memorial’s 28 stained-glass windows. In 1947, the church burned its mortgage, and it has been debt free ever since.

The granite in the building came from a quarry in Mount Airy and the bricks were handmade by the same mason who helped build the R.J. Reynolds Tobacco Co. factories.

Today, Memorial has about 16 to 30 regular attenders. In its early days, the church was affiliated with Evangelical Reformed Church in America. It has been a non-denominational church since 2007.

Concerned about the future of the spiritual and historical landmark that Memorial represents, the Consistory of the church voted in December 2019 to approve the possibility of City Park nesting in the building.

Signed Dec. 22, the six-month agreement allows City Park to use Memorial’s sanctuary and other space on Sunday evenings and at other times when Memorial is not using the building for $500 a month.

“When City Park came to us in November with an offer to move into our space and let us ‘nest’ them, it seemed to be an answer to our prayers,” Campbell said.

“We are not growing, and to have City Park come in with a core of more than 60 people of all ages who care about the community and have a focus on the neighborhood and building relationships is exciting,” he said. “We continue to grow older and weaker, and it is going to take a church like City Park to make it go and grow.”

“I think City Park Church has the potential to be one of the strongest churches in Winston-Salem. Having a strong church on this corner is very important. We know churches are people and not buildings. This church is essential to the spiritual health of the Washington Park community.”

Search for a site

Mark Brown, elected with Johnson as one of City Park’s first deacons, had led the effort to find a place where City Park could nest in and grow. (The church’s official launch is Palm Sunday on April 5.)

He contacted six churches through the summer and fall of 2019, and the church’s administration team met Nov. 22 with Campbell to see if there was a possibility that Memorial would host City Park.

Since it was located in the center of the Washington Park area they wanted to serve, Brown and the City Park team considered Memorial an ideal location.

“They shared that they believed God was not done in Washington Park, and welcomed us to the neighborhood,” Brown said.

A work in progress

For his first message in Memorial’s sanctuary, Toby Pegram, City Park’s pastor, read from the apostle Paul’s letter to the Philippians. 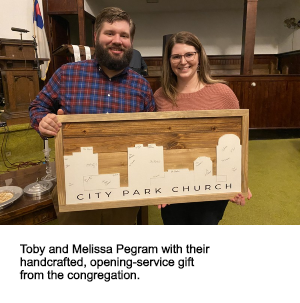 The scripture speaks of God’s faithfulness to complete the works He starts — both for individual believers in Jesus Christ and the churches they create to love and serve others in His name.

As with many others of City Park’s core team, Pegram said he was awed to see that biblical text and truth come to life in worship Jan. 12 at Memorial. City Park’s first worship service followed more than nine months of prayer, and work by the members to create a children’s nursery and other ministries from scratch.

“God used the gifts of so many people so we could come together as the church of Christ to worship Him,” said Pegram, referring to City Park members like Austin Hurst, the new church’s worship band leader.

“This year marks 10 years since I first started playing in Triad’s youth band,” Hurst said. “The opportunity to lead the worship at City Park is really special and something the Lord just directed me to do.

“I had just graduated from Liberty University and did not know what I was going to do when Rev. Toby contacted me and was so excited to see what God could do through us.” 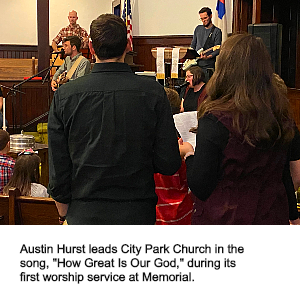 Before the band had even played its first note in the service — worshipping God through such songs as “How Great Is Our God” and “How Deep the Father’s Love for Us” — Hurst had already seen an example of City Park’s impact.

“We were practicing in the afternoon before the service at Memorial, and people from outside just walked in and said ‘What is this?’ ” Hurst said. They had heard music playing from inside the church.

“God is already working and already moving and all He wants us to do is join along with Him in His work.”

That same opportunity is what convinced Brown and his family to leave Triad and become part of City Park’s core team.

“The time was right to move in this direction,” Brown said. “We knew Toby from our daughter’s time in youth, and were part of Jason Caranci’s Sunday School class before he moved to Raleigh. That opened our minds to consider something new and challenging.

“My wife, daughter and I agreed to start attending the plant team meetings to see if this was for us, and God showed us it was,” he said. “City Park provides a smaller setting to serve and make a difference for the cause of Christ.” 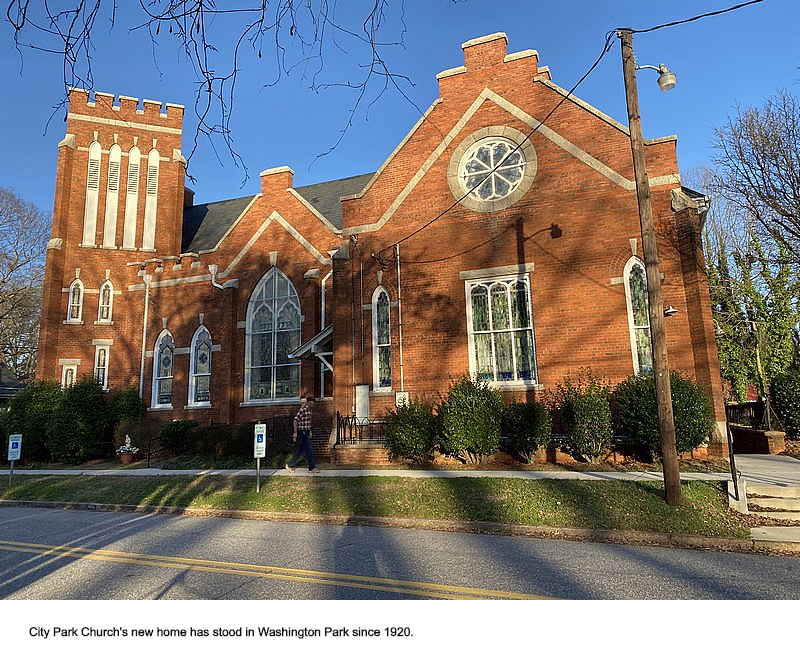