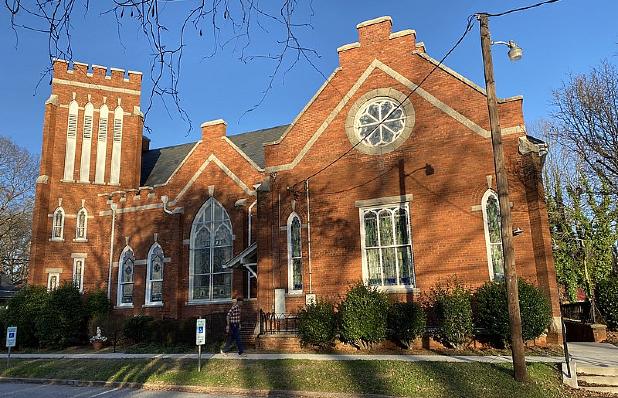 City Park Church now has its own sanctuary and building in the heart of Washington Park in Winston-Salem.

Effective May 1, Memorial Reformed Church became part of City Park — a merger that brought with it ownership of the church built in 1920 at Banner Avenue and Hollyrood Street in Winston-Salem.

City Park is the first church plant of Triad Baptist Church in Kernersville.

“We inherited the building for free,” said Toby Pegram, City Park’s pastor. “We are owners of the building but have no mortgage or debt for it. We simply pay for the utilities and the insurance.

“Obviously, this is a huge blessing for us because we had previously set aside $500 a month for the building under the lease we signed with Memorial Dec. 22, 2019,” he said. “Now we have a place of our own that is not only functional and beautiful but in the heart of the community God called us to serve.

“We can meet and do ministry out of the space to the community, invite people to an actual place and time we know we can meet, and reinvest the $500 each month in ministry and outreach.” 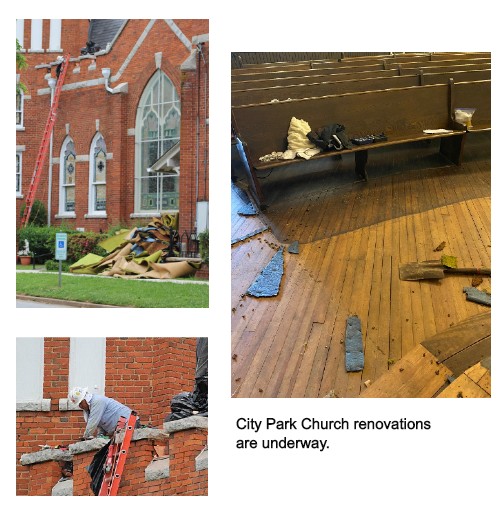 Rob Decker, Triad’s lead pastor, said the rarity of a church plant like City Park acquiring its own building and a fixed location so early in its development shows the power of prayer and the God who works not by might or power but by His spirit.

“Prayer is the lynchpin to God’s provision and power in our lives,” he said. “I had no idea when we did the prayer walks last summer in Washington Park that God was going before us to provide a building — and one we walked right past.

“Every time I prayed and saw that building, I’d pause and say, ‘That would be a good place for our church plant to meet,’ ” he said. “And now it is City Park’s home. To God be the glory!”

Originally Schlatter Memorial Church, Memorial Reformed Church began in 1915 as a Sunday school class meeting on the second floor of the Brame’s Store at the corner of Acadia Avenue and Hollyrood Street. Nearly 200 members moved into the church’s building after its dedication in 1920.

City Park held its first service in Memorial’s former sanctuary Jan. 12 and had planned April 5 for its public launch.

But those plans were shelved when N.C. Governor Roy Cooper announced a stay-at-home order and prohibitions against large gatherings of 10 or more people to maintain safe social distancing and help limit the spread of COVID-19 disease.

“It was disappointing to watch something that we had all been looking forward to for so long get pushed back even further, but we know God is in control,” Pegram said. “There are many examples in scripture of people having to wait and in the waiting God does even more than they could have expected. I believe this is what is going to happen with City Park.”

“We have really encouraged our members to love their neighbors well, and our church has really responded to that!” Pegram said of outreach efforts. “We had a great response to it, and more people are hearing about us.

“It’s amazing to see what a gospel-centered, mission-minded church can do in just a few weeks! The Lord really works and moves in people’s lives!”

In addition to assuming ownership of the building at no cost, Pegram said that Memorial gifted City Park with money to help it pay for roof and other repairs identified in a building assessment.

While none of the repairs were deemed critical, he said the church decided to go ahead and fix some of the roofing and gutters, remove carpet in the sanctuary and refinish its wood floor for use, and get other work done.

On May 17, City Park members will maintain their social distance and enjoy worship outside on the church’s lawn as North Carolina begins to relax its rules for church gatherings in its phased approach to reopening.

As the church prepares its new home for a post-COVID-19 future, Pegram said interested Triad Baptist members can use its Facebook page and other social media to volunteer to help with renovations, post notes of encouragement, send cards, and — most importantly — pray for the church’s members and leaders, mission, and community. Pegram said members can also contact him via email at pastortoby@cityparkws.org.

“During this time when my plans for City Park are disrupted, I really trust that His plan is far greater. It’s not just better but infinitely better. It’s perfect.”