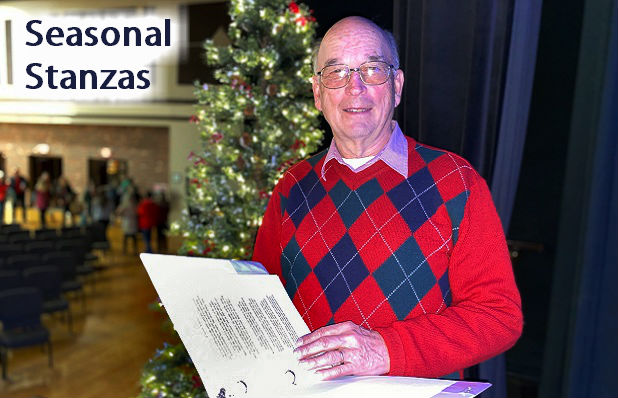 Those blinking lights you see on towers and other structures that keep planes from flying into them?

Well, you can thank Fred Mark in part for that. Until he retired and moved from New Hampshire to Kernersville in 2010 where his brother lives and where, he quips, ‘you don’t shovel your weather,’ he designed avoidance lighting as an obstruction lighting expert.

Somewhat like his lights, Mark, 81 years young, stands out in a crowd.

One reason is his poetry.

Since 2016, members of Triad Baptist’s traditional choir know that at the end of hours and weeks of rehearsals — and usually right before their final Christmas program performance — Mark, a choir tenor, will present the choir’s annual Christmas gift to Worship Director Scott Compton.

But only after Mark reads an original poem penned specifically for the occasion. 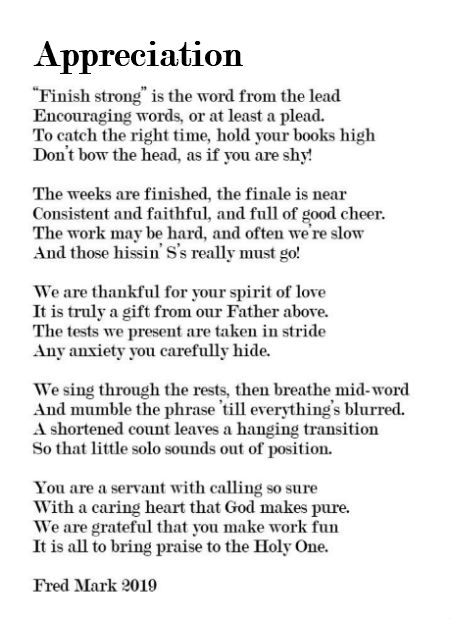 “I thought it should be more than, ‘Here, and thank you very much!’ ” said Mark, and that was that.

Compton has kept every poem in a book, and cherishes the words and love behind each edition.

“Fred reads them aloud with his distinct voice and inflections,” Compton said. “He always injects humor and uses things that have been said or emphasized at rehearsal. He always includes some very kind, encouraging words too, and certainly has a unique gift with words.”

For Mark, the poetry and poems are part of the normal ebb and flow of life — something he’s dabbled in for nearly 40 years — and serve a variety of purposes. Those he writes and delivers to Compton and his accompanist wife, Lori, say ‘thank you.’

The poems Mark leaves for his wife, Jeanne, when he gets up early to work, say, ‘I love you.’

“If she were awake, it is like a morning hug and a kiss,” Mark said. “I leave them where she will make her breakfast.”

Other poems note key family events like anniversaries, birthdays, weddings, and funerals. And still others celebrate holidays and expand upon themes and ideas he’ll get and quickly put to pen.

The first time Mark ever publicly shared a poem was the “Tears and Roses” tribute to mothers that he wrote and read for Mother’s Day in 1998. He’s only been on the receiving end once — when a granddaughter turned the tables on him and created a poem for his 60th wedding anniversary.

Some poems take weeks, Mark said, while others come to mind suddenly. The latter was the case for the “Pray for America” poem published in the program of the Faith Men’s Conference March 22-23 in Bartlett, Tennessee. Inspired by those words on a license plate frame with the American flag, Mark wrote the poem in just four hours.

One of the conference’s speakers — retired Army chaplain, colonel, and former pastor Allen Ferry from Triad Baptist — heard it and asked Mark if it could be used.

“Some poems seem inspired,” he said. “I remember traveling to Florida from New Hampshire for my mother’s funeral. Jeanne was driving about 2 a.m. back in the days when we often drove nonstop, and suddenly a poem about mom’s life came into mind.

“We stopped to get a tablet — a paper one, that is — and for the next hour I wrote almost like I was copying the text. It just flowed.”

The Marks joined Triad Baptist in 2012 and would have joined earlier, he jokes, were they not so involved in the church’s choir. That made it hard to attend the First Step membership classes.

Along with the choir, Fred and Jeanne are part of Darrell Fulp’s Sunday School Class, the Faithful Friends senior adult group, and serve together in the Nehemiah’s Few handyman ministry. Fred also leads one of the Connect Groups in Triad’s small-group ministry.

But the choir is a particularly treasured area of service and ministry.

“I have been in choirs since junior high school and like to sing,” Mark said. “I like the theology of the message in the words, the musical challenge, the melody, and the company of other choir members.

“I would go to choir practice just for that even if we didn’t have any public presentations. Scott sings with us, understands us, and makes work to be fun. He has a great attitude, protects our dignity (does not embarrass) and laughs with us and never at us. Such tolerance!”

Mark said what he enjoys most about poems is the challenge of finding the right mix of rhyme and meter and content.

“Poems tell a story in a special way, and that makes them harder to write,” he said. “For me, the best part is making them fit, having some fun when they are read, and the accomplishment.”