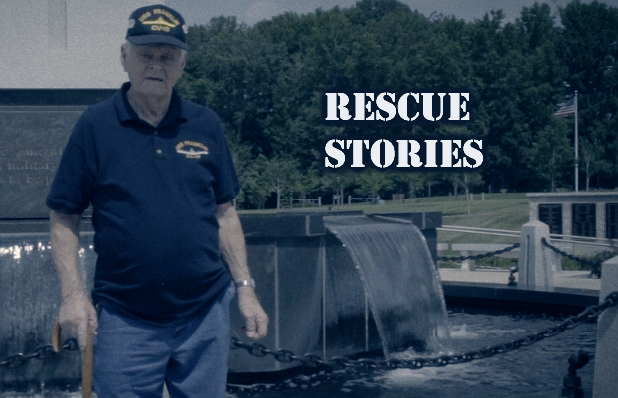 The USS Franklin’s decks bustled with activity that March 19, 1945 morning.

Just 50 miles off the Japanese coast, closer than any aircraft carrier had been in World War II, crews turned planes around for launch on the flight deck and hurriedly loaded them with bullets, bombs and rockets. A few decks below, pilots huddled in the ready room going over their targets for their next attack in a series of sorties that had begun before dawn.

Elsewhere in the massive ship, cooks served up breakfast to the proud crew whose ship had wreaked havoc on the Japanese fleet, ports, factories, and troops.

Down in the fire room of one of Franklin’s eight boilers, the 19-year-old farm boy from the Roanoke Valley felt the ship shudder from the concussion of the two armor-piercing bombs that penetrated the flight deck into the hangar and other decks and set off fuel, ammunition, bombs and rockets.

In the blink of an eye, much of the ship had become a listing, flaming inferno.

Amid the chaos and ensuing darkness, Furrow didn’t need to be told what he couldn’t see represented. As a child, he and his schoolmates had heard the explosion of a transformer that had electrocuted a lineman working nearby and smelt the odor that swirled into their classroom — the same one now belching out of the Franklin’s vents.

“It was burning flesh,” remembers Furrow. “You don't forget that smell, ever. I knew we were hit bad, and I might not survive.”

He dropped to his knees and cried out to God for help. In an instant, the Japanese bombs had transformed a religion into a relationship and made Christ so real to Furrow that he could feel His presence all around him.

“I told the Lord that if he would let me live, I'd serve him for the rest of my life, I’d even gladly milk our cow back home — and He knew how much I hated doing that,” Furrow remembered. “That's exactly what I have tried to do ever since, and my life has never been the same.”

It took rescue crews nearly four hours to open the hatch that eventually allowed Furrow and other seamen to climb out of their smoke-filled quarters and wind their way upward through the maze of destruction to safety. He had survived by taking a hammer, busting open a water supply line and keeping his face near the rushing water, remembering his seamanship training that “wherever there's moving water, there's oxygen.”

The attack killed 724 and wounded 265 in one of the most deadly attacks in U.S. naval history but that’s only part of the story. Because of the bravery and gallantry of her crew, the Franklin survived, becoming the Navy’s most-decorated ship, and one known forever as “the ship that wouldn’t die.”

It wasn't the last time Furrow’s own unsinkable faith would be tested.

One of the biggest tests came when his son, Michael totalled his GTO around midnight on Dec. 19, 1969. Michael, then 19, would not open his eyes again until March and never completed the transfer from community college to Virginia Tech that had been mere days away.

“I remember the woman at the check-in table of the hospital telling us he was brain damaged and likely wouldn’t live,” Furrow said. “Nothing prepares you for something like that. I was sitting in the waiting room and trying to console both my wife, Barbara, and my daughter, Connie, and deal myself with what had happened. It was something like 2 in the morning and a tall man in a brown suit comes over and says, ‘I don't know what your problem is but you can’t handle it by yourself. You need to pray for God to help you.’

“He walked off and I never saw him again and for all I know, he may have been a messenger the Lord sent to remind me that there's nothing He can't help us bear. I do know we went right to the hospital chapel after that and prayed together.”

It would be months before Michael came home, the same time the Furrow’s second daughter, Tammy, unexpectedly arrived. A co-worker at Cummins Diesel, where he worked as a service technician, told him there was no way he was going to be able to care for a mentally disabled son and newborn on his income.

“He told me, ‘You know you can’t make it. You don't know whether he is going to get well and now you have a small baby, too,’ ” Furrow said. “I remember telling him, ‘Well, what’s the alternative? Going bankrupt? Quitting wasn't part of my vocabulary. I know from my life that God can bring you through anything. You can make it. You’re just going to have to put the effort out first but He will bless you and make the way available if you're willing to work and not quit.”

The Furrows relocated to Kernersville in 2005 to be closer to Connie because of Barbara’s declining health. In another of his life’s many twists, Connie had to have open heart surgery not long after they arrived — temporarily reversing the caregiver roles.

God helped the Furrows through that crisis and helped them raise Michael who now lives in an assisted-living facility. Furrow retired from Cummings in 1993 after 30 years with the company.

A longtime volunteer with Triad’s Food and Fellowship team, Furrow received the Legacy Award from the church on Oct. 20, 2013. He’ll turn 92 in November.

A life of service

Furrow has made good on his Franklin prayer promise in a lifetime of ways. In 1999, he organized a drive to collect and deliver donations for Hurricane Floyd victims in Kinston, N.C. — an experience that melted away racial stereotypes lingering from his days on the farm when he wondered why a black farmhand always rode in the back of his father's truck and ate his dinner on the front porch instead of dining with them at the table.

“We took six trucks, a bus and three cars to Kinston,” Furrow said. “I remember this black woman there gave me the biggest hug I have ever had in my life. She was so thankful for the help. It didn’t matter to me what color she was. I came to see her as a person — a sister in Christ — who simply needed our help. I tell people all the time that just because you’re a ‘Baptist’ doesn’t mean you're going to heaven. What you do for your brother has to match up with what you say you believe in your heart.

“When you learn to see people as Christ does, well, you see things in a whole new light.”

Two years later, Furrow was at it again — this time aiding flood victims in West Virginia. But his generosity also has been much closer to home, such as the neighbor he and his wife adopted in Roanoke. They drove her to her doctor's appointments, provided her with firewood for her chimney and checked up on her regularly.

Before leaving Roanoke, The Roanoke Times and World News featured Furrow as one of its “Everyday Heroes” because of all the handyman jobs he did for others, trimming shrubs, installing ceiling fans and buying and recycling furniture to those in need.

Here in Kernersville, Furrow volunteers several hours each week in the thrift shop of Next Step Ministries which cares for battered women and their children.

Furrow’s life is a story of servanthood whose secret is simple: God rescues us, calls us to servanthood, and blesses us through our selfless love and service to others.

“How else could you be except sharing what you have with someone else when you think about how God rescued and saved you, and what it cost for Him to do that?” Furrow said. “I think that's what God meant for us to do and commanded us to do. I remember once when I was a struggling young father and made a trip to the local grocery. There was a great big box with my name on it with enough groceries inside to last my family a month — all donated by other customers.

“I have never had a lot of money but always have been blessed with health and time and have tried to put those to use serving others in the same way just as others have cared for me. That's what ‘Love your neighbor’ and ‘feed my sheep’ mean to me and that's the way it’s been all my life.

“Serving others is where I get my joy and enjoyment from,&rdquol Furrow said. “I’ve learned that when you rely on Him, there's nothing that can sink you.”