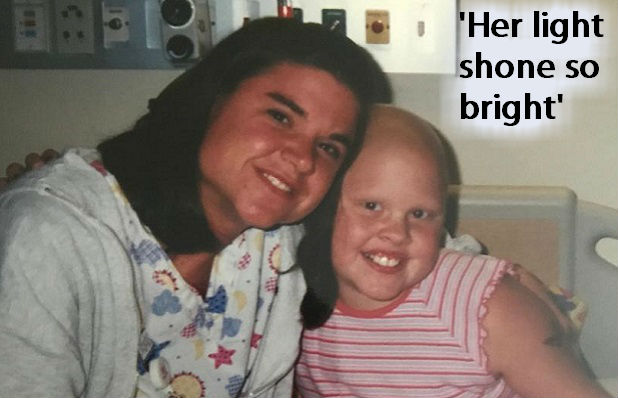 On the same day terrorists attacked the Pentagon, turned the World Trade Center into rubble and shook a nation to its core, God was building something beautiful in Brenner Children’s Hospital through a 7-year-old child named Erin Browning.

It was her first day of chemotherapy and the first time she met nurse Mia Creed, now a member of Triad Baptist Church.

You may not know, Erin, who died Nov. 1, 2004 from Ewing’s Sarcoma — a rare tumor that grows in the bones and soft tissue — but have probably heard the Casting Crowns song she inspired.

That’s Mark Hall’s “Praise You In This Storm” which he penned after learning about Erin’s cancer struggle and love for group’s music and gospel message. She even created a dance for their song, “Here I Go Again,” which she performed with her mother, Laurie, and sisters, Mary Beth and Caroline, for the last time in May 2004.

Story Behind the Song

Due to its debut with the album the day after Hurricane Katrina, “Praise You In This Storm” became an anthem of hope for people struggling to recover from, and try to make sense of, a very public storm.

But Erin had already helped Creed quiet a very private storm raging inside her for years — the search for life’s meaning and purpose which she faced every day walking alongside families and their children fighting death and illness. She’d known religious rituals from her childhood but knew she didn’t have a personal relationship with Jesus Christ.

“I walked room to room taking care of sick children and felt a feeling of dread,” recalls Creed, who, after 15 years on the nursing floor, has spent the last seven in documentation for Wake Forest Baptist Health teaching healthcare providers data entry techniques for patient records.

“I’d wonder, ‘What was the point of all of this?’ and thought on that 9/11 day when I first met Erin, ‘Whatever has happened to the twin towers surely will happen here soon,’ ” Creed said. “But Erin’s room did not take that perspective. There was so much more.” 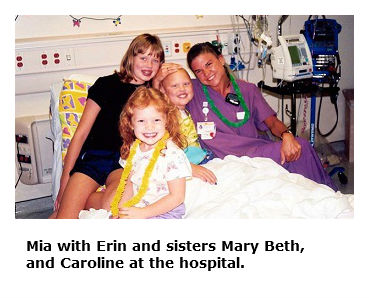 Erin’s mom, Laurie, remembers the day her daughter’s world changed as if it was yesterday — and that was a year before the full-body scan on 9/11 showed the tumor in her foot was Ewing’s and had spread, greatly lowering her chances for survival.

“My husband had begun playing Christian music for our girls and they loved it,” Laurie said. “One night, when we were saying prayers before bedtime, Erin said she felt like she had an empty space in her heart. We had the conversation about who Jesus was and Erin knew even at 6 that Jesus was God’s son who died on the cross for her sins.

“She prayed that night to receive Jesus Christ as her Lord and Savior. The words she said right after the prayer came back to me painfully loud and clear one year later when the doctors told us she had Ewing’s Sarcoma. Erin said, ‘I can’t wait to go to Heaven!’ ”

Creed loved on Erin and the family loved her back in return, recalls Laurie, who laughs at memories of Creed sometime aiding Erin in the pranks that went along with the mischievous streak behind her characteristic big smile.

“Somehow, Erin and another Ewing’s patient, Michael, got hold of some syringes and filled them up with water and squirted the nurses,” Laurie said. “Mia and Erin just clicked and she was incredibly warm and we loved her immediately. She has loved our family in a special way, and we still stay in touch.”

Although it has been nearly 15 years since Erin died, Creed still thinks of Erin and how God used her along with other influences to help her realize her own need for a Savior. (Creed’s spiritual birthday is Jan. 15, 2003.)

It happens each time she hears “Praise You In This Storm” come over her car radio or when she hears a message like she did Sept. 1, 2019 this year at Triad Baptist Church, which she and her family joined in 2015.

In another of his “What’s the Point?” messages from Ecclesiastes about life’s tough questions, Lead Pastor Rob Decker recounted the tragic death of a missionary’s wife and child and how God ordains crisis and pain and how we’ll never know — since we’re not God — how God works in all things, even the death of a child or other loved one.

“That message was so true,” Creed said of the biblical truth Decker shared. “The big picture isn’t always so visible. Could anyone have known that God would use the love and faith of this little girl and her family to touch me and so many other lives?

“Erin was so different. Her light shone so bright I was blinded. She told everyone from X-ray techs to housekeeping to me — and people she spoke to publicly in 2002 when her cancer briefly went into remission — about Jesus and what He had done for her.

“She did that even in the midst of a battle with cancer and getting chemotherapy which she knew would make her sick,“ Creed added. “Who can’t see the beauty in that? Erin, her family and so many others clearly had God and I did not. I could see the face of God in so many of their faces which He used to show me how much I needed Him and to move me toward joining them in God’s family.”

‘I try to be the light that Erin was’ 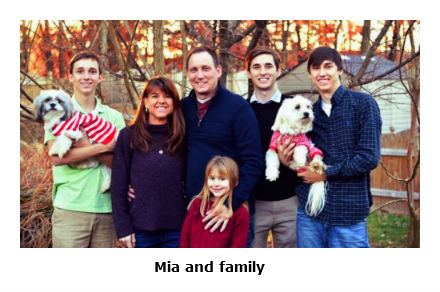 Like Creed, Laurie says Erin’s legacy is a deeper walk with God (including the ability to be open and honest about struggles), a moment-by-moment appreciation for life, and love for others.

“After Erin’s death, it took me a very long time to want to pray or read the Bible again because I had faith and prayed for healing but God didn’t heal Erin the way I wanted her to be healed,” Laurie admits feeling after her daughter’s death. But she eventually learned to trust God for the answers to the questions she couldn’t answer.

“The only way I have found beauty through the pain is to abide in Christ,” Laurie said. “He has carried me through devastating times and showered me with the peace that comes from believing words like John 15:5: ‘I am the vine, you are the branches. If you remain in me and I in you, you will bear much fruit; apart from me you can do nothing.’ ”

As for Creed, her encounter with Erin and 15 years as a pediatric hematology oncology nurse have molded her into a person who doesn’t sweat the small stuff and who knows nothing is impossible for God. She continues to marvel and draw encouragement from how He continues to do big things with a little faith.

“I try to be the light that Erin was for my daughter and when I see Zoey’s light shine bright, I know why I am here,” Creed said. “I was so small before I found God and now know there is so much more than just what we see here. I think Erin may have known she only had 10 years here so she didn’t waste any time focusing on the little stuff. She got to God’s work early. What a great example for all of us!” 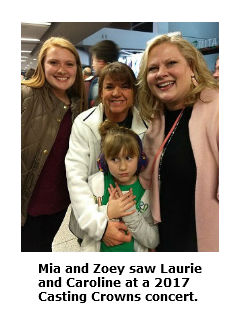 Which brings Laurie to perhaps the most difficult faith lesson learned during the biggest storm in her life — one that literally had her standing on the Bible reading Scripture at Erin’s urging the last hours of her life.

“One thing I would love for more people to understand is that God is so powerful he can work miracles even in the face of death,” Laurie said. “So often, when someone is healed from cancer or survives a bad accident I’ll hear people say, ‘God’s hand was definitely on them!’

“I am here to tell you that God’s hand was also on Erin, and my whole family, even though her life on Earth ended. Mark Hall presented me with a huge scrapbook at one of the Casting Crowns concerts in Greensboro that was full of hundreds of emails. They were all received from people who told him how Erin’s song had touched their lives!”

Said Hall himself in one of many interviews about the song (a story he chronicles again in his book “Lifestories”), “Jesus said, ‘In this world you will have trouble but take heart, I have overcome the world.’ It’s unexplainable peace but I’m going to hold onto it. Sometimes God calms our storms and sometimes He chooses to walk through it with us.”