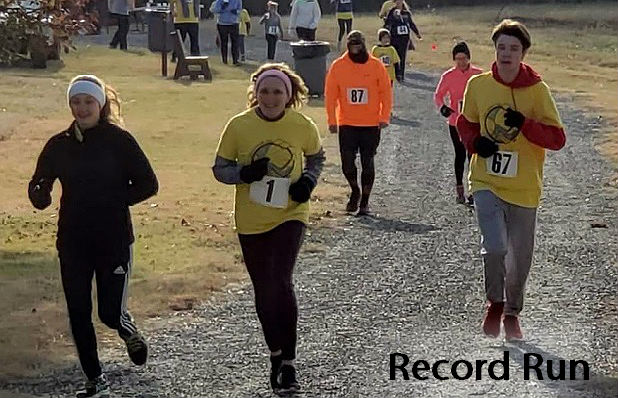 Megan and Michael Interlandi thought they were checking out a new community in Georgia but God instead was inspiring them a way to further advance Christian education back home in North Carolina.

That’s how it went in October 2018 when a job relocation seemed imminent for the family, and they walked about a Christian school checking it out for their children.

During the tour, they learned about the fundraiser that been a financial backbone for the school and its students over its 104-year history.

While family moves are never easy — not to mention considering moving further away from both sets of grandparents &151; Interlandi marvels at how God used the possibility of one and all that comes with it to further strengthen the family and inspire the idea to support TBCA.

“Visiting this school and being on their campus was inspiring because we know at TBCA we’re building this same legacy,” she said. “When our family found out that we would be staying put and would not be moving to Georgia, we thought we could implement a parent-driven fundraiser that could grow in size and impact here in Kernersville over the next 104 years. 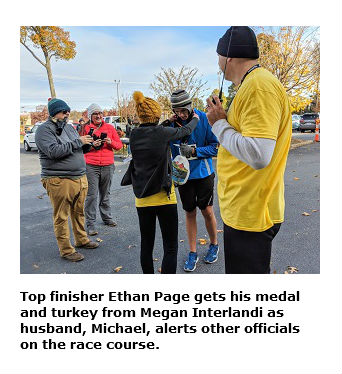 “Knowing that God has blessed Triad Baptist Church and Triad Baptist Christian Academy with a beautiful recreation trail, we felt a 5K Trail Walk/Run was the best use of the resources God had already given!”

When the move didn’t materialize, the Interlandis put their plan into action at TBCA — leading a committee of 12 parents as race coordinators.

“We had great involvement from two Academy staff representatives, Melissa Myers, the Academy’s office manager, and John Hemingway, its athletic director,” Interlandi said. “Both Melissa and John are in their first year in these roles and stepped up in a big way to support us in our planning.”

Race day proved brisk and chilly but with a palpable sense of excitement and fun — including the registration table’s pilgrim-decorated pumpkin that TBCA elementary students had dubbed “Sir Cranberry” in a voting contest.

First across the start/finish line in the first Triad Turkey Run and taking home a medal, gift card to Fleet Feet and frozen 15-pound turkey was runner Ethan Page who found out about the event online.

The first three men and women to cross the finish line all received Fleet Feet gift cards too, and every participant who finished received a turkey medallion. Before the race, gift cards were awarded in drawings to Cakes and All Things Yummy and Whit’s Frozen Custard.

The Interlandis tapped into a growing trend with their fundraising idea.

According to Running USA, the national trade association for all things running, more one million people will participate in 1,000-plus races from Thanksgiving through New Year’s Day.

Thanks to turkey trots, walks and runs — and perhaps the desire to counteract some calories &151; Running USA said Thanksgiving Day runs top them all.

Organizers of the Y.M.C.A. Turkey Trot in Buffalo say theirs was the first — an 8K. It’s been around since 1896, which make it the “oldest consecutively run footrace in North America.”

At Triad, the Triad Turkey Run is the third to date on the church’s campus off South Main Street. The first was the “Run for God” in June 2015, which capped a 12-week blend of independent Bible study, prayer and exercise with a 5K fundraiser for missions. 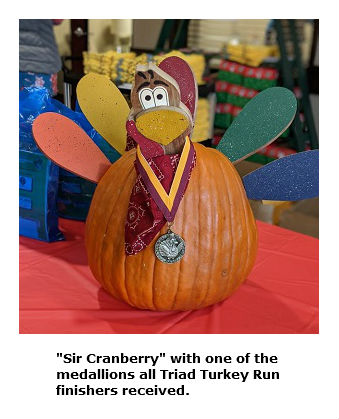 Then, in September 2017, a “Fix Your Eyes” 5K run/walk at Triad raised money for the church’s Loving the Least of These orphan and foster care support ministry.

Interlandi said the more than $10,000 raised — the most over in a TBCA fundraiser — will help advance technology studies for students and support its sports programs. A date for the 2020 run will be determined in January when the Academy sets its 2020-21 calendar.

“Our TBCA Race Committee had set a stretch goal of $20,000 to give us something to work toward and build for the future but are extremely pleased in the final total — a great goal to inspire us as this event returns next year and becomes an annual tradition,” she said.

“That the Triad Turkey Run is TBCA’s most successful fundraiser to date adds to the excitement of a first-year event and possibilities for the future.”