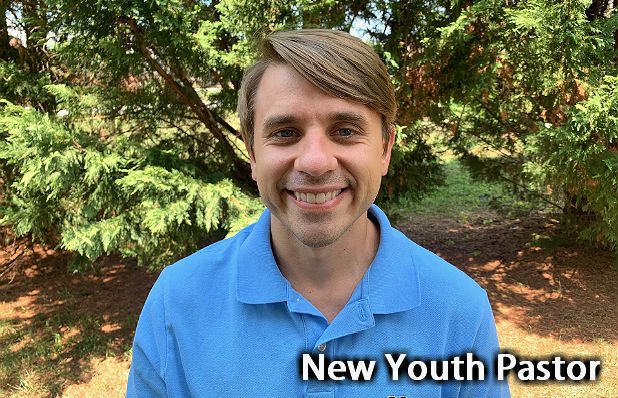 Kyle Cox had largely tuned out the voice of God his first two years at the University of Maryland.

He was focused on chasing his dream of sportscasting for ESPN.

But then something happened in the control room of a radio station — one of many encounters God used to alter Cox’s life and result in his hiring as Triad Baptist’s new youth pastor.

Earlier this month, members resoundingly approved the search committee’s recommendation to hire Cox with a 98 percent vote of approval.

It came after Cox met in person with search committee members, youth and parents, the church’s Executive Leadership team, staff, and deacons, and spoke June 30 at all three services.

“When I went to the radio station to learn the audio board for an upcoming sporting event, I had been praying and asking Jesus Christ to provide something for me since I was beaten up spiritually,” Cox said. “The training itself should have only taken about five to 10 minutes but the guy showing me the ropes stuck around.

“It turned out he was a believer and was involved in InterVarsity Christian Fellowship. The Lord used him to change my heart and draw me back to Him, and we wound up leading a small group Bible study together for other guys on campus.

“He was the best man at my wedding, is still my best friend, and, after a stint in TV, is in ministry today himself as a creative arts ministry director for a church.”

As his faith in Christ grew, Cox’s desire for sports TV fame faded — to the point where, when other broadcast journalism majors were lining up broadcasting internships, he sought one in ministry.

“In my junior year of college, the Lord started to work on my heart,” Cox said. “I had been spending a lot of energy trying to make myself known when Jesus Christ was saying, ‘Make me known.’ ”

Both Cox and his future wife, Morgan, applied for and were accepted as interns at different campuses of the same church — McLean Bible Church — in the metro Washington, D.C., area.

It’s where Cox grew up and accepted Christ at age 12, following his parents who became the only members of their own families to follow Jesus Christ.

“During our interviews at McLean, they brought us in groups of two and Morgan was who I was paired with,” Cox recalled. “As I listened to her story and how God had brought her to this point in her life, I was blown away and amazed by her.”

The student ministries director who mentored Kyle and his wife officially introduced Kyle and Morgan to each other through a dinner invitation. As they fell in love and began dating, Kyle was falling in love with Jesus Christ and ministry, too.

“I got into ministry and found my calling was ministry,” Cox said. “I was serving students, teaching and discipling students, and going on mission trips, and couldn’t see myself doing anything else. 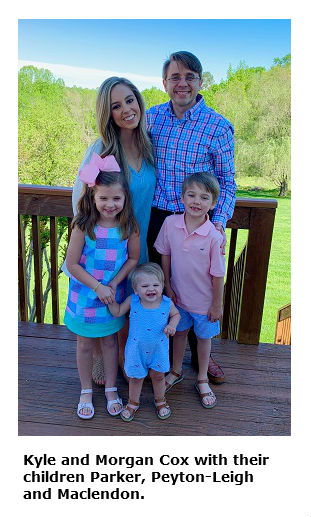 “Unlike broadcasting where you can build it, do it, and know it will crumble one day and not last, ministry work is eternal. It gets me up in the morning and gives me hope.”

McLean hired Cox after his internship as student ministries director at its Loudon County campus — a post he held for four years.

Midway through, he and Morgan were married. The couple have three children — twins Parker, 7, and Peyton-Leigh, 7, and Maclendon, 2.

In 2013, they moved to Lynchburg, Virginia, so Cox could begin work toward his master of divinity degree. He graduated in May 2018. Years earlier, Morgan had earned an degree in kinesiology from Liberty as an undergraduate student.

Cox has served as an academic advisor for online students in counseling and psychology at Liberty and managed projects for communications and development. Morgan has taught fitness classes.

“After earning my degree, I really wanted to go back into ministry,” Cox said. “This past year was the ‘what-are-we-doing-here’ kind of year for us as we asked God to open a door.”

It swung open wide when Triad decided to launch its first church plant and the hiring of Toby Pegram created the youth ministry vacancy.

“Morgan’s cousin and his wife used to attend Triad and told us about it and I read the Connections article on the website,” he said. “When I saw Toby was leaving because Triad had launched a church-plant ministry, that got me really excited since that matches my theology in ministry. I have a passion for, and believe churches should, plant and produce new churches.

“So that told me Triad was a healthy church and a place I might want to serve. I applied, and am grateful for this opportunity.”

He hopes to teach youth the difference they can make at their schools by being Christ followers first and students second — drawing their identity and self-worth from Christ (not friends and social media) and discipling others to do the same.

“I can go out into the community and be at school events but ultimately what draws students to connect to the body of Christ is their peers living out their faith in real and authentic ways before them every day.”

Similarly, Morgan said older adults at Triad can help youth grow spiritually through the examples they set for them with their lives and life stories.

“Youth can learn a lot from other generations such as the wisdom for how to handle life issues and how to maintain a trust in the Lord when you don’t understand what is happening to you or going on all around you,” she said. “We’re all about stories — Facebook, Instagram, and on.

“Church can become a lot of masks, and we can think everyone around us has it all together until we hear that they don’t. Sharing your successes but also your failures  can show you and others that one mistake doesn’t mean the end of you. The Lord can bring you back from that.

“The child-like faith of youth also can be contagious to older generations,” Morgan added. “A teen starting a shoe drive in a foreign country from their bedroom can inspire an older adult to also not count the cost and do something bigger than themselves for Jesus Christ.”

Cox said he’s looking forward to serving at Triad and preparing youth to go out and change their worlds.

“If we can send students away from Triad with a heart that loves Jesus, a passion to share the gospel and an understanding of what a biblical, healthy church looks like then that is success,” he said. “It’s an important mission since today’s youth are our future, and the future of the church.”