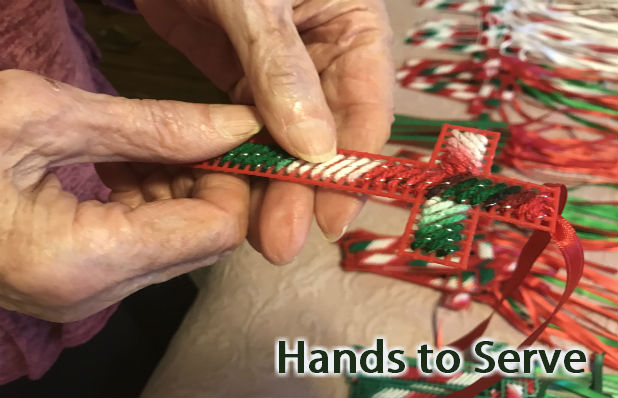 Her arms opening and closing rhythmically as needle and yarn pass through the plastic cross shapes she’s cut and placed in a basket beside her, Eunice Roberts does something she’s done every year since she retired in 1986 as bookkeeper for a textile company: make crosses for Christmas.

On Dec. 23, children attending the worship services of Kids Street Children’s Church at Triad Baptist each received one of the red, white, and green crosses Roberts made just for the occasion.

At a pace of about 14 a day, and made in the chair of her apartment facing her TV, that was more than 15 days’ work.

Nearing 94 — her birthday is Dec. 30 — Roberts has to take a few more breaks than she once did to give her arms and shoulders a rest and because the macular degeneration in her eyes makes it harder to see.

But she’s not about to stop making them, or let anything get in the way of what has become her primary ministry for Jesus Christ.

“I can’t get out but I can do this,” she said of the crosses she not only makes for Triad but for other churches, missionaries, nursing homes, and friends and family. “This is my ministry.”

Most of the crosses are designed to be bookmarks, although Roberts adds a ribbon and turns some into necklaces. A skilled crafter who made quilts and other crafts for years — her kitchen table has quilted placemats she made herself — Roberts also takes old greeting cards and makes them into gift tags for presents.

But the crosses are the mainstay of her crafting work and days that begin late and extend to 1 a.m. “It gives me something to do to keep my mind sharp and keep me active,” Roberts said. “I have neuropathy in my feet and legs but this is good for my mind. It’s something I’m able to do with my mind and hands.”

The hardest part of her cross making isn’t their production, she said, but getting to the craft stores where she buys her supplies — the plastic material and ribbon at one store, and the yarn at another.

Sometimes her family doctor drives her there, and sometimes other friends, but she makes the regular trips required so she can keep making her crosses.

It was a visit to one of those craft stores back when she lived in Shelby (she moved to Kernersville in 1987) that gave Roberts the idea for what has become her signature craft.

“There in the window was a small cross made out of the same material but with no real decoration, and so I thought I could add yarn and ribbon and do something,” she said. “I haven’t seen any crosses like I make.”

Roberts rarely gets to see the people who receive her crosses but she hears often about those moments and results. “A church gave some to their children and the person there told me they would rather have one of my crosses than a toy,” she said.

The biggest order she’s ever made was 1,100 for the 2015 Vacation Bible School at Triad where she’s a member and her son, Dennis, is executive administrator.

“Now that,” she smiled, “was some work but I know the kids enjoyed receiving them. I enjoy making them because I know they will be used and will remind people about Jesus Christ as they place them in their books or see them.”

“The way she’s used her gift of crafting to bless us and so many others is a great example of what God can do through you when you put that gift to His service,” Gerber said. “Our kids love them, and many adults ask for them when they see them, too.

“Especially at this time of year when that message can get lost, her crosses remind us Christmas is really about the gift God sent in His son Jesus Christ whose death on the cross paid our sin debt once and for all so we could, through faith in Him, have victory over death and eternal life.

“Every time one of our children look at the crosses they’ll be receiving, I hope Jesus and the gift He gave will come to mind.”

In addition to the crosses she makes for churches, Roberts always makes others just to have on hand. The apartment complex where she lives uses her apartment to show others, and her guests will often leave with some of her crosses.

Looking back over her long life, Roberts said she knows she has much to thank God for in a life of faith that began at age 11 in Bakersville, a small town in Mitchell County, North Carolina.

She’s thankful for a loving husband (Charles, who died in 2009), for her son, three grandchildren and four great grandchildren, and the opportunity after her husband retired to travel and go on several tours.

Most of all, she said, she’s thankful for the blessing of life itself.

“The Lord has allowed me to live long enough so I could do some of the things Charles and I longed to do together,” Roberts said, “and He has allowed me to be healthy enough to continue to make these crosses.”