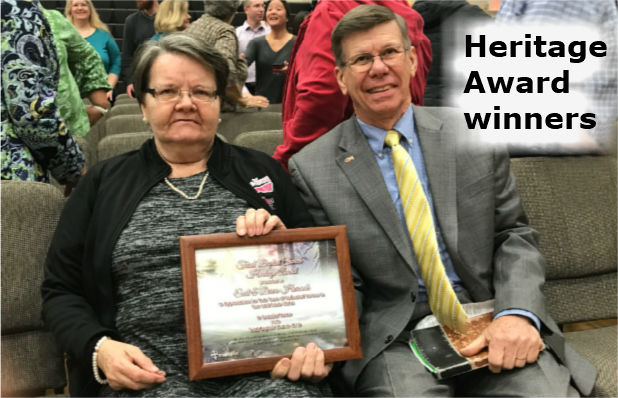 For the 24 years she’s been a member, Diane Hancock has served in the Triad Baptist Church nursery nearly every Sunday.

Some of the babies she’s rocked are now in college.

This care for the little ones at Triad since 1995 goes back to Dillon, South Carolina, where Diane, 70, accepted Christ as Savior as a little girl at the Dillon Church of God which helped support an orphanage.

Hancock’s husband, Earl, 75, meanwhile has been a familiar face particularly for visitors over the years — driving golf carts or directing traffic or keeping an eye out for potential trouble to keep people safe, or helping folks find their seats inside for church services.

Their daughter, Tina Shull, remembers Diane hosting children from the home for two weeks each summer when they lived in South Carolina. It was a love for the least of these that later encouraged Shull to adopt two children of her own with her husband, Mark.

Earl said he’ll never forget July of 1991. It was the month they married (on the 12th), bought the same house they live in today off Glenn High Road, moved, and the same month he transferred to a new department at AMP, now known as Tyco Electronics. He retired in 2013.

The Hancocks each left failed marriages to start anew and agreed from the start there would be no stepchildren in their home. All would be considered and treated as their children together, period. Their two sons — John and Shaun Hatchell — and two daughters — Holly Fisher and Tina Shull have collectively given them nine grandchildren.

“Her family say Diane has always been a Godly woman, a mother who would do anything for her children and grandchildren and gave the children in her care at the nursery the same love she showed them,” Decker said.

That love and care extended even further for the family of Mark and Teresa Carter at Triad. When their twins, Morgan and Taylor, were born 21 years ago, they were living in McLeansville while Teresa worked in Kernersville and didn’t want to put their children in daycare. Was there a Godly woman and mother who could help? Executive Pastor Tim Gerber knew just the person — Diane, who helped raise the girls from six weeks of age until they went to preschool.

But the connection between the two families didn’t stop then but continues to today.“She’s had the biggest influence on my kids,” Teresa Carter said.

“Once we got to know Diane and Earl they adopted us and we adopted them too,” she said. “They are Mimmie and Papa to my children to us just as they are to their own  children.

“My parents live in California and Diane been like a mother to me,” Teresa said. “If I had a question about raising the kids, or cooking, or anything else, she was right there for me. She’s just a wonderful person.”

Earl said Diane had an immediate impact on him as soon as he met her.

“Diane and I met through a friend, we hit it off right away, and things just clicked,” he said. “For so many years, she was my account, treasury chairperson, tax account and loving wife. Until recently, she took care of all of those tasks, and all I had to do was bring home a check!

“She has blessed my life immeasurably and those of our children, grandchildren, and so many others whose lives she has touched along the way.”

As the Hancock children know, not attending church was never an option. Diane and Earl chose Triad because of its sound Biblical teaching and youth ministry, and never regretted their decision.

Today, even despite some health challenges her golden years have brought, Diane continues to thank God for everything. She loves word puzzles, and when she finds a word, she always thanks God for it and the ability to assemble the puzzle and finish the task at hand, just as she thanks him for far greater blessings.

Her children likewise marvel at the way Earl, who accepted Christ as Savior at Calvary Baptist Church in Rockingham County at age 16, has loved their mother, God, and them and their children through thick and thin.

When the family used to have Sunday dinners, Shull said, Earl would ride bikes with her children around Salem Lake afterward. He still goes out of his way to see a grandchild play sports or spend time with them.

And he enjoys building engines and working on classic cars in part because of the witnessing opportunity the hobby provides to those who call on his help and who don’t know Jesus Christ as Savior.

Over the years, Earl has served as usher, Building and Grounds Chairman, parking chairman, and a member of the Security team.

He’s enjoyed being a member of the Sunday School class led by Steve Moore and from the many biblical insights gained from Decker’s sermons and teaching.

For the Hancocks, the verse, Romans 8:28 has always been a source of encouragement and reminder of the blessing of being children of God — a challenge for how they should live:

“And we know that all things work together for good to them that love God, to them who are the called according to his purpose.”

One of their most treasured memories is the night Decker came to their house in the middle of the night as their son, Shaun, became a part of the family of faith and accepted Christ as Savior.

Looking back on their lives and what God has done for them through the years, the Hancocks offer this advice to those coming after them: Trust God with everything and enjoy the eternal hope that comes from having an in-all-things kind of faith.

“For those who do not know Jesus or who are just starting out as Christians, I would tell them about terrible trials we’ve experienced,” Earl said. “If not for faith, we could not have survived. Salvation is free, and all you have to do is to ask to receive it. As the song goes, ‘You are going to live forever, so you better be ready.’ ”