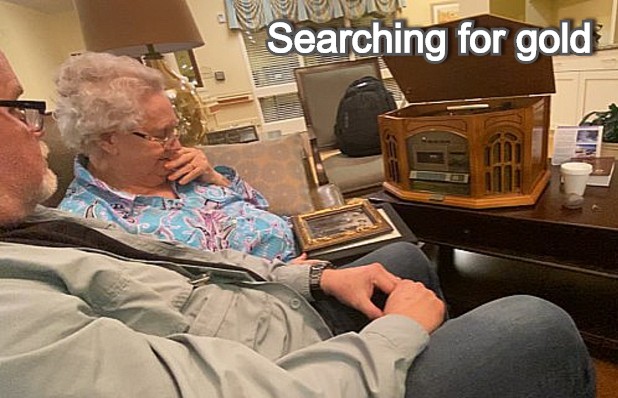 Peggy Wall stared at the slightly yellowed photograph — unable to identify the young couple getting married at the Good News Baptist Church parsonage 67 years ago in Madison, North Carolina.

Then her son, Tim, put a vinyl record on the turntable, and she listened to the bride and groom say their vows.

When the woman said, “I do,” Wall’s eyes and mind cleared. That was her voice and she was the bride (Peggy Martin) getting married to Tom Wall, the local DJ for the Mayodan AM radio station where they met one Sunday afternoon when her church quartet sang live there.

Tom Wall later worked as the WCOG-AM sales manager. It had been 35 years since Peggy had heard her groom’s voice from the wedding. Tom died unexpectedly in 1985.

Sitting on a sofa at Summerstone Health and Rehabilitation Center with her son, Peggy Wall smiled, looked up and said triumphantly, “I did!” before Alzheimer’s drew the mental curtain down again.

The disease has taken much of her mind but not her hope in Jesus Christ.

Such moments with his mother keep Tim Wall going and motivate him to keep loving, honoring, and helping awaken her soul that disease can’t harm. 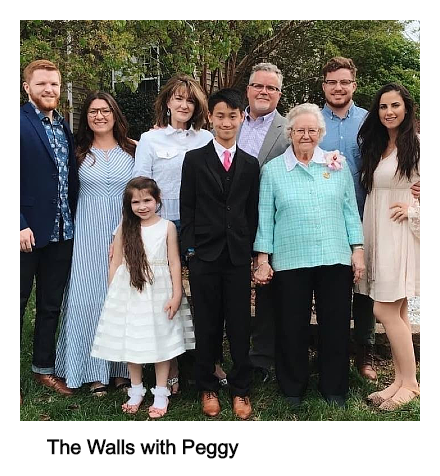 “The reason I do things like bringing this record here my dad made and playing it for her for the first time is that I’m looking for my mom,” said Wall, who joined Triad Baptist Church in 2013 with his wife, Cindy.

“It’s like digging for a vein of gold,” Wall said of playing the record to help his mom reconnect with her past. “You have to keep mining away to find it so that, if for just a moment, she can be freed of what Alzheimer’s keeps largely hidden.”

According to the Alzheimer’s Association, more than 5 million Americans live with the disease, which is expected to affect as many as 16 million people by 2050.

Despite this expected growth, North Carolina has extended a multi-year moratorium on creating special care units in nursing and adult care homes — ones specifically designed for people with Alzheimer’s disease and other forms of dementia.

Numbers like these and their human toll are what drive Tim Wall to both minister to and advocate for those with dementia care.

Last year, the mission took he and his son, Levi, to Raleigh to meet with legislators, and included a Sunday Night Adult Class at Triad that he led full of information about dementia and resources for caregivers.

To those, Wall would add:

With the aging of the Baby Boom further swelling the numbers and human cost, Wall is glad to be doing his part to bring awareness and Christ’s love to his mom. Given the disease’s personality-altering effects, Wall counts it a special blessing that his mother has maintained her charitable disposition through Alzheimer’s.

He traces his respect for senior adults and heart for their needs back to a grandmother and handwritten notes of scripture and other encouragement that he received as a student at Kentucky Christian University and, later, at Wheaton College Graduate School.

After earning his degrees in Christian Education, God added to his heart for senior adult ministry through service as a chaplain at a long-term care center in Atlanta, Georgia.

“It’s a group of people and a ministry I care deeply about,” Wall said. “I just try to be a conduit and point people to resources that can help. These are people who have done so much for us, and need to be validated.”

Before he took his mom back to her room at Summerstone, he asked her to pray with him and a visitor. The curtain of Alzheimer’s lifted and the prayer and its beautiful words flowed freely.

For that moment, her heart again led a familiar conversation in Jesus’ name — a name Peggy Wall never seems to forget.

Crisis Control Ministry in Kernersville provides emergency food, medicine, financial and other need-based assistance after verification by its volunteers.