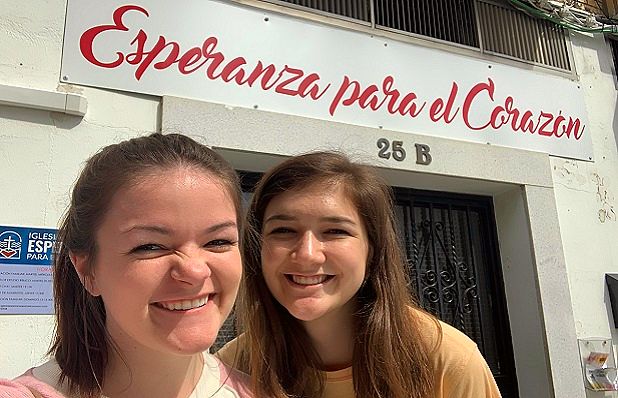 It was before dawn when the Facetime call requests began to pop up one after another on Abby Hurst’s phone March 10. All broke the same news: President Donald Trump was banning travel from Europe and only Americans would be able to fly back to the U.S.

When was she coming home?

The Liberty University sophomore had traveled to Spain Jan. 31 to start what was supposed to have been a 15-week internship in her global studies program. Students usually don’t serve abroad until their junior years, but she’d earned enough credits to go as a sophomore.

COVID-19 disease wasn’t much of a concern to th 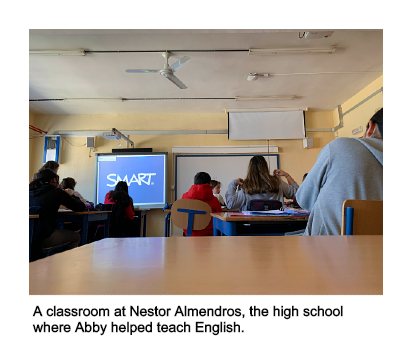 e affable Spanish she encountered on her arrival to the city of Seville. Home was the three-bedroom flat of a college professor, speech pathologist, and their three children.

Coronavirus then raged mostly in China.

Over the next several days, Hurst leaned into a weekly schedule that had her teaching English to middle and high school students on Monday, Wednesday and Friday, doing an informal English chat session at her church — Hope for the Heart — on Tuesday, making evangelistic forays into the city on Wednesday, distributing food to the community with the church on Thursday, and helping it hold worship services each Sunday.

Any free time in between went to meeting new people and getting to know the ones she’d already met more. When she turned 20 on Feb. 11, she got not one or two but four birthday cakes — courtesy of her host family and three others.

“That definitely was a birthday I’ll never forget,” Hurst said. 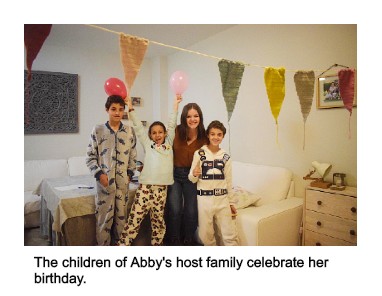 The experience was unlike the mission trips she’d taken with the Doulos Sunday School class at her church, Triad Baptist, or with Calvary Day School, her high school. Those short trips to the Dominican Republic and Costa Rica respectively focused on acts of service.

Despite falling in love with Spain and its people who greet each other with a kiss on each cheek and don’t even walk the dog alone, Hurst said God used the time to expose her to a different aspect of living out her faith for Jesus Christ.

“My biggest lesson was learning the difference between mission-trip living and missional living,” she said. “Going to Spain, I realized missions is not as much about doing than living alongside people intentionally and bringing glory to God through how you interact with others and make him known through your actions and love for them.

How she got to Spain in the first place, and how she came home amid the COVID-19 pandemic underscored another faith lesson: God is sovereign over all and worthy of our praise, and trust.

Months earlier, while still on Liberty’s campus in Lynchburg, Virginia, Hurst had pondered internship options from a list of about 15 approved organizations. While Spain might seem a good choice for a global studies and Spanish major, she felt no pull to go there.

Yet every organization she talked with about opportunities suggested she go to Spain, including the International Mission Board (IMB). When she met some missionaries through the parents of one of her best friends who had served with IMB, she took it as God’s confirmation and went all in.

Spain, here I come, she thought. All seemed well for a time.

But then came March and the ominous arrival of COVID-19 disease in Europe. She and a University of Arkansas student in Seville with IMB first noticed COVID-19 cases in France where they’d planned to visit. By March 7, the country was up to almost 1,000 cases and that trip was off. 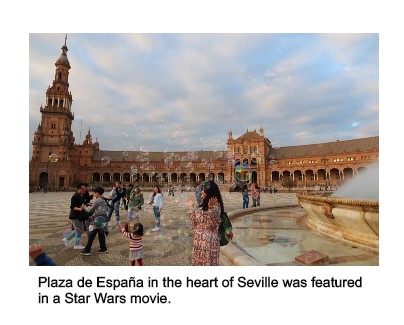 The disease exploited the relational closeness of the Spanish people to spread. The government-ordered countrywide lockdown came quickly along with hefty fines in euros for those committing such infractions as driving with others in the car.

Hurst saw COVID-19 transform a city known for its Gothic architecture, tapas and churros and flamenco dancing into one with empty parks and people that now avoided each other.

A change in plans

Not long after the alerts from family and friends March 10, she got an email from her professor at Liberty: she and her program’s 30 students would be coming home. The university was shortening internships from 15 weeks to seven but still providing full course credit.

Because no flights were available earlier, Hurst prepared to fly out March 18. She wasn’t upset her professor couldn’t find any earlier flights. She’s already given that to God and trusted Him with her safe return.

“Those extra few days with my family were one of the biggest blessings,” she said. “My family has a 7-year-old girl and 10- and 12-year-old boys, and I was able to help with homework and spend some more time with them.

“Goodbyes are a huge thing in Spain, and I was able say goodbye and have that closure.”

They sent her off with a gift of gloves to go with the mask she took along as she and her IMB teammate headed to the Seville airport for the connecting flight to Madrid and their flight back to the U.S. on March 18. But once at the airport, they got an email saying the flight was canceled.

They called their IMB supervisor and changed plans: They’d take a train to Madrid and catch another flight home there.

“It was eerie and there were just four people on the train,” Hurst said. “We arrived in Madrid, and a woman who works for the organization came to drive us back to her apartment. We got pulled over because there were three of us in the car.

“Because of our train tickets, he let us go back to her house and the next morning we went to the airport. We were supposed to leave at 11:30 a.m., and had no peace of mind till we got on the plane.”

Nearly 10 hours later, they arrived in Chicago and prepared to go through customs and the COVID-19 health screening.

Hurst prayed for a smooth and timelier passage than the three to six hours others had experienced getting their temperatures taken and filling out Coronavirus health screening forms. “I prayed for 25 minutes, and we made it in under 30,” she said.

Her parents picked her up at Charlotte Douglas International Airport when she arrived 9:30 p.m. March 19; her teammate flew home to Arkansas from there.

Once back home in Lewisville, Hurst self-quarantined for 14 days before venturing out into a much different country than the one she’d left in January — including not visiting her grandfather who lives just 10 minutes away because his heart condition puts him in at higher risk for serious complications from COVID-19.

“Through everything, the Lord taught me that He is working the most when I understand the least,” Hurst said. “Even before I went on my trip, I was just praying through Psalm 77 and asking, ‘Lord, help me to remember your character even when I won’t understand.’

“The whole adventure was unexpected, and I didn’t know what God was doing but I knew this: He is good and He will not fail me. I can definitely see myself going back to Spain and serving Him there someday.” 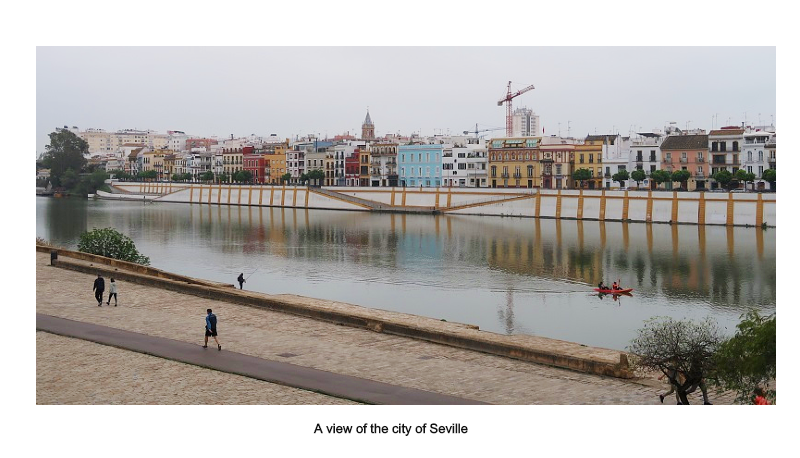