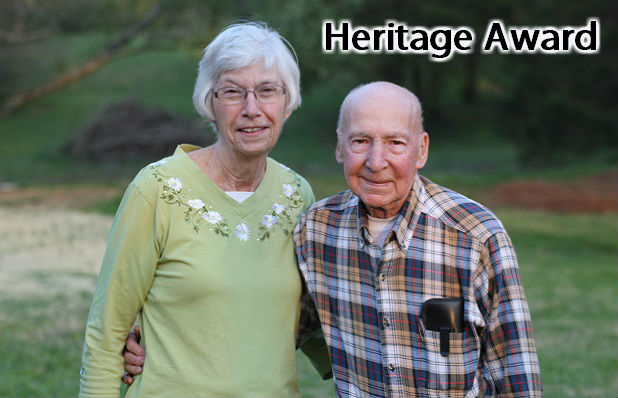 Church has always been close to heart – and place – for Eutice Ivey, 81.

The church where he came to know Jesus Christ as Savior in Robeson County was just a few miles from his home, and the church he and wife, Linda, have attended for 32 years in Kernersville — Triad Baptist — is less than a half mile from their front door.

Eutice has been a Christian for 54 years.

“Eutice and Linda taught their children the importance of being faithful in attendance, giving, and service,” Decker said. “Both believe strongly that their lives and families are the result of the church and its influence, their faith in Christ, and the friends God has blessed them with and brought into their lives.”

Building a career and family

After attending Southern Business School in Atlanta, Georgia, in 1955, Eutice moved east to Winston Salem in 1956 and took a job as a clerk at Norfolk & Western Rail Railway, now Norfolk Southern.

He would go on to spend the bulk of his career working in the trucking industry — working 23 years for Truck Lease Services in the dispatch office before retiring in 2006.

During the Cold War, Eutice served with the U.S. Air Force (just over four and a half years), some overseas and then back in the Triad at the Winston-Salem Air Force Station — part of a network of bases set up to watch for enemy aircraft. Today, the base is now the site of Union Cross Park.

Eutice’s wife, Linda, is also a U.S. Air Force Veteran (serving for three and a half years).

They met on a blind date in 1960 when she was a nursing student at city hospital in Winston-Salem (today’s Forsyth Memorial Hospital). They married in 1966, and have three children — Harold, Dawn, and Karen — and five grandchildren. Linda went on to serve more than 34 years as a nurse in Winston-Salem.

The wedding of Eutice and Linda’s daughter Dawn in 1990 was the first held at Triad Baptist where Eutice served two terms as chair of the Baptism committee, taught as a substitute Sunday School teacher, and welcomed guests to special programs. For all of his 32 years at the church, he’s sung as a tenor in the church choir.

Eutice and Linda also have been longtime members of the Faithful Friends ministry, once leading the group after the death of Billie Evans, and serve on its executive committee.

While Triad is now in its third sanctuary and has grown to 2,400 members, the Iveys remember the congregation had about 200 when they joined in 1986 after then-music director David Miller invited them to come when he visited their neighborhood.

The one constant amid all the growth and change, Eutice said, has been the people of Triad. “The people have always been friendly, and, just as they welcomed us in, we try to give others that warm welcome, and invite people to services and special programs at the church,” he said.

“We have learned continuously along the way, and grown in our faith, and God has brought so many wonderful friends into our lives through Triad Baptist.”

The Iveys grew up in an era when families attended church Sunday morning, Sunday night, and Wednesday evening and not only passed on that faithfulness to their children but a commitment to regularly honor God in other ways large and small, such as prayers of thanksgiving before every meal and helping out those who needed a meal, or a call of encouragement.

Asked for insights he’d pass along to young married couples and others joining Triad and building homes and careers, Eutice said, “Participate, and let God work through you.”

He added, “Stick with the things you enjoy and are good at, and that God can use to help others.”

The impact of Eutice’s quiet and steady hand has not only been felt at Triad but in Kernersville’s sports scene. Eutice was one of the founding board members of the Kernersville Soccer Association, and served as a soccer referee for 23 years until age 73.

“I was coaching my son Harold’s soccer team at the YMCA and several of us got together and said we needed a league of our own,” he said, explaining his role in KSA’s history.

“Soccer is a game that I learned after becoming an adult,” Eutice said. “It’s a a sport of constant movement, both for the players and referees. You’re out there on the field and need to constantly use your judgment: Was it a foul or a good play? It’s up to you to make the correct call.”

Six years ago, Eutice branched out into another sport — this time as participant. At age 75, he joined a rec league softball team of the Winston-Salem Recreation Department. He now plays catcher for a team called The Bombers where everyone is in their 80s.

As with everything else he does, he’s there, and on time, and a league member for more than just the exercise.

“I enjoy being part of a team,” he said, “and playing alongside my teammates and getting to know them.”