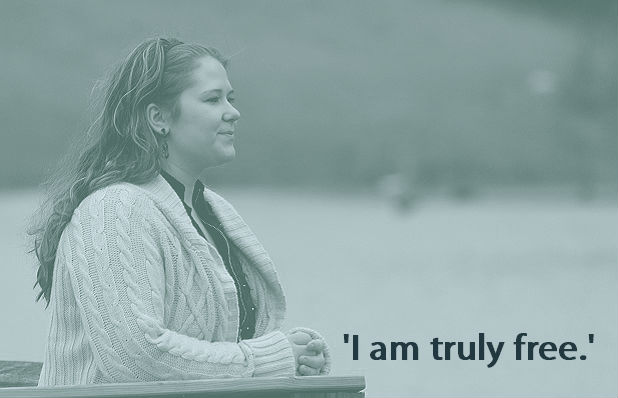 A life once stained by drugs and a descent into darkness and possession by a demon has — through Christ and a ministry of Triad Baptist — been restored and made clean and whole again.

It’s why Schuster, and so many others, were particularly touched by the message of Lead Pastor Rob Decker’s “White Christmas” sermon series on forgiveness and who responded to his Twitter account call by sharing their own stories and struggles.

Yes, she was that person he spoke of who had trouble forgiving others (one person in particular) and forgiving herself.

God uses people with a past

“Just as God picks people with a past to help people with a past you can use your own bad situation to help others,” Decker said in one message, noting the Apostle Paul as one of many people in the Bible who God changed and used powerfully in the lives of others.

“If you think you have to earn forgiveness, you will make other people earn your forgiveness,” Decker said. “The reason so many have trouble forgiving is they have never really accepted God’s total free gift of forgiveness, and can’t forgive themselves for that they have done. But forgiveness is not something you can give yourself. It’s what God did for every sin, past, present and future through Jesus Christ and His death on the cross.”

Schuster could definitely relate to those words. The 22-year-old daughter of Lynn Schuster, who has been a member of Triad Baptist for more than 20 years, admits she made some very bad choices in life growing up — why she bounced from school to school, and one problem to another.

“I’ve had a really bad alcohol and drug problem since I was 14,” Schuster said. At her life’s lowest point, she was shooting meth and met a friend whose occult leanings led to her own harrowing possession by a demon — evidence of the very real spiritual warfare that rages daily.

“We did everything together, and I thought I knew her in and out but I was wrong,” Schuster said. “She liked to dabble in the occult, and my worst fear became real when I was possessed by a demon while with her one night. I would tell everyone I believed in Jesus but I wasn’t living for Him. I wasn’t a Christian. Even the demons believe that Jesus Christ is the Son of God.”

In the aftermath of that experience in March 2015 — the intervention of a Christian friend who spoke the words of Jesus to free her from the demon — Schuster became scared straight. But while she said she accepted Christ as Savior at the time, Schuster knew it was more out of fear of the demons and their return.

“I was at home one night by myself praying and reading,” Schuster said. “It was such a sweet experience. I knew I wasn’t going back to where I was.”

Today, she’s married to a husband with a good job, is the mom of two (age 5 and four months), a waitress at a restaurant in Greensboro, and a Christ believer and follower.

‘Forgiveness starts with me’

“What I’ve really struggled with is forgiving her for doing this to me,” Schuster said of the friend who brought the occult into her life. “I felt betrayed. She said she was my best friend and she totally flipped my world upside down. But I realize now that God used that experience, and my worst fear, to reach me.

“It was a real eye-opener to accept bad things that happened and look at the good that came out of them,” she said. “This March it will be two years since I have touched a drug. One of the things God did for me is that I have had no drug withdrawals at all and no urges to take them or medical complications. I am truly free.”

The more Decker spoke God’s truth into her life this month in his sermon series, Schuster said, the more she realized the problem was not her friend but her.

“In the long run, it was not her fault, it was my fault for following the wrong people and making the wrong choices,” Schuster said. “I realized this was not about my friend but me and how I couldn’t forgive myself for all the things I had done in the past. Forgiveness starts with me.”

Schuster said Triad’s Celebrate Recovery ministry, and Steve Woodall, the ministry’s director, have played a powerful role in her re-ascent to hope from despair.

She began attending because she had to for social services reasons but the have-to-go attendance soon became a want-to-go experience, and she considers the Friday meetings vital life- and soul-changing support.

“I look forward to Friday night every week because of the impact we have on each other,” Schuster said. “They have become family to me. I love every single one of them.

“It is hard for me to connect with other Christian people sometimes who don’t understand me because they haven’t experienced what I have,” she said. “Through Celebrate Recovery, I’m around people that love me and are grounded in their life on God’s word, and who have their own bad pasts and have been where I’ve been.”

Each time she goes to Celebrate Recovery at Triad, Schuster said, God speaks something new to her heart. At one recent meeting, that was the importance of trusting God and His timing.

“We learned how God provides peace and love and courage as we go through hard times, and how everything happens for a reason and is part of God’s will,” she said. “I needed to hear that because I’m often impatient and knew I need to trust more in His timing.”

Added Woodall, “Every one of us go through difficulties and trials at some point and Celebrate Recovery is one of many ways we as a church body are allowing people to reach out and share their burdens and see how Christ is being magnified in their life, and through the lives of others.”

Because of her freedom from drugs, the love of her Celebrate Recovery group, church, family, and more, Schuster said that Christmas has become a different kind of holiday.

“This Christmas I was sober again and wasn’t out with friends getting high who also didn’t care it was Christmas,” she said. “I’ve been able to be with family and just enjoy others’ company and celebrate Jesus’ birthday.

“Because of Him and the people He’s used in my life to touch me, I love more, and I give more. That’s what Christmas, and my life, is all about now.”