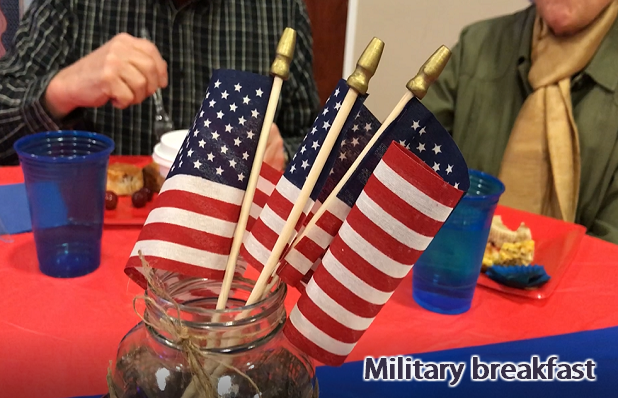 There was no sleeping in on this Saturday morning for middle schooler Jasper Wilson.

The 12-year-old was up and at it early Feb. 17 in Triad Baptist’s Youth Room to serve not only his own father but other military veterans in the church.

About 40 youths from The Crossing middle school and Radiate high school youth ministries combined forces for the military appreciation breakfast — serving food, manning a photo booth area, and delivering a framed craft to each veteran (a small U.S. flag set against the words of the Pledge of Allegiance).

Brent Wilson, who served on Okinawa for the U.S. Marine Corps from 1985-89, appreciated the gesture, and enjoyed seeing Jasper serving alongside other youth ministry workers.

“I think it’s awesome, and appreciate that they are honoring us in this way,” said Wilson, who serves as an assistant meat manager for the Publix supermarket chain. “In addition to serving my country, what I took away from my time with the Marines was punctuality — learning to get places on time — and discipline.”

Jared Guy, 17, served Larry and Jan Sewell and other veterans at their table.

“It’s pretty nice,” Guy said of the youth ministry’s first breakfast for the military. “We’re thanking them for helping our country and defending our freedoms. Someone has to since freedom isn’t free.”

Youth Pastor Toby Pegram was pleased with everything about the first-time breakfast.

Each month, Triad’s youth do a service project. Last month, Pegram said, they made more than 50 blankets for patients at Brenner Children’s Hospital.

This month, it was a military appreciation breakfast — the idea of parent Sonja Eads who helps lead the team that organizes outreach events — and a project that united both middle- and high-school aged youth.

“It’s been really cool to see them working together,” Pegram said of the breakfast which featured a message from Col. Allen Ferry, a former military and prison ministry chaplain.

Reflecting on the lessons his own father, Robert, had taught him before his death in 2007, and those a WWII veteran uncle passed along with a knapsack, Ferry called for his breakfast listeners to transfer their heritages of faith, love, and patriotism to the next generations of their families.

“Too many children today are growing up with the wrong concepts and don’t respect their parents or others because they haven’t been taught,” Ferry said. “Show and tell them. It’s a lifetime project.”

Ferry said that includes learning about God and His word and being part of a local church.

Looking around the room at the youth, he said, “You are here today because someone wanted you to be here. Don’t wait for tomorrow to tell them how much they mean to you.”