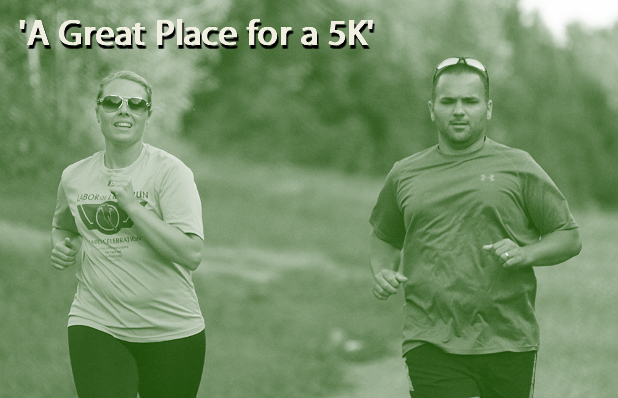 Jim and Bekah Billock started running for exercise eight years ago — inspired by the people of all ages they saw participating at a 100-mile endurance race in Ohio alongside a family member.

But it was a walk, and not a run, that led to the “Fix Your Eyes 5K” they’re holding Sept. 9 on the nature trail that winds through nearly 92 acres Triad Baptist Church bought in 2014.

“We took a walk out on the trail after they put the gravel path in and it was beautiful,” said Jim Billock. “I told Pastor Rob (Decker) that it would make a great place to hold a 5K, and we followed the church’s ministry guide process to start a new ministry, and here we are.”

The couple’s 5K is the first fundraising race, and first open to the community, held on Triad’s campus.

The event follows in the footsteps of the “Run for God,” that Triad members Jeff and Kelly Larrimore held March 26 at Ivey M. Redmon Sports Complex in Kernersville. That run capped a 12-week blend of Bible study, prayer and exercise to encourage physical and spiritual health.

The race gets its name from a passage in the Bible’s book of Hebrews (Hebrews 12:1-2) that reads, “Let us run with perseverance the race marked out for us, fixing our eyes on Jesus, the author and finisher of our faith.”

Register now at tbcnow.org. Registration, which includes a race T-shirt, is $15 by Aug. 13, $20 after Aug. 13, and $25 on race day. Early pick up for race packets is 6 to 7:30 p.m. Sept. 8 in the Kids Street Worship Center lobby. Or packets can be picked up on race day. Cash or checks can be dropped by the Church Office during weekday business hours before the race, or in person on race day.

The 3.1-mile run/walk begins at 9 a.m. and involves two circuits of Triad’s trail. Those registering on race day should arrive between 8 a.m. and 8:30 a.m. Children and families are welcome to participate but parents must register their children.

About $7 of the registration goes for the shirt, the Billocks said, with the remaining proceeds going to Loving the Least of These, the church’s support ministry for foster and adoptive parents as well as those involved in orphan care.

“We hope to get people out on the church property so they can see how beautiful it is while also raising awareness and support for the Loving the Least of These,” Bekah said.

“We chose this ministry as they are starting up, and wanted to support their efforts to reach these children, their foster families and the community with the love of Christ,” Jim added. “As for the future, our goal is to support a different ministry of the church each year.”

Originally from Ohio, the Billocks moved to Kernersville and began attending Triad Baptist Church in 2015 after learning about its ministries from Bekah’s sister.

“We attended one Sunday and heard Pastor Rob speak,” Jim said. “We were encouraged and challenged by his sermon, and our children Emma and Ean loved the Kids Street Children’s Church ministry and wanted to come back. So we stayed!”

“There are so many things we love about TBC,” Bekah added, “including the Connect Groups small ministry, children’s, middle, and high school ministries, the worship, the people, and the many ways to serve!”

Jim serves on the Security Team and Bekah is a Sunday School teacher and Vacation Bible School volunteer.

Jim, a nurse, and Bekah, a teacher, trace their interest in running to a 100-mile endurance race in 2009. Jim’s oldest brother ran, and they volunteered.

“As we watched the runners of all different ages and stages of life come in to one of the aid stations, we decided that if these people could do 100 miles, we could run one,” Bekah said. “So we started small and then we ended up loving it and running 5Ks, half marathons, 25Ks and 50Ks.”

Jim said some life changes have temporarily disrupted their running schedule, but added, “We’re working at starting it up again! We enjoy running together as we get time outside to be with each other while also talking and exercising.”

One of the first times Jim and Bekah experienced Triad’s new land was May 8, 2016, on Mother’s Day.

“We went out to check out the church land that day before they had the path,” Jim said. “We have been out several times to walk and jog the trail since the path was put in. We love that you feel like you’re in the country, but you don't have to go far!

“There is beautiful scenery and wildlife out around every corner,” he said. “The crushed gravel path is plenty wide enough to walk and talk with others while you're out there. We are excited for others to get out there and enjoy it as well!”

The early response to the race has been strong, the Billocks said, who are hoping to attract at least 100 runners in Triad’s first 5K and then work to get the race officially sanctioned in future years.

Their Connect Group, which they host at their home, has provided a solid core to help them organize the race, but additional volunteers are welcomed.

“It takes an army to plan a race!” Jim said. “We have almost our whole connect Group involved as well as many others that have stepped up to help. We definitely could not do this without the help of others! We would love to have more volunteers as well as anyone who would like to sponsor the race to help increase the funds for Loving the Least of These.”

Added Bekah, “For volunteers, we have plenty of jobs such as help at the start/finish line, handing out water at the water stations along the course, help with parking, and other duties. We would also gladly take donations of items that we will have for the race participants post-race, such as bananas, water bottles, and bagels.

“For those that would like to be involved in a financial way, we would love to have businesses or individuals sponsor the race,” she said. “Any donation is appreciated. If businesses donate, we will place their business name on the back of the race T-shirt. All donations are tax-deductible too. If you would like to be a sponsor, please send your donations to the church office by Aug. 31.”