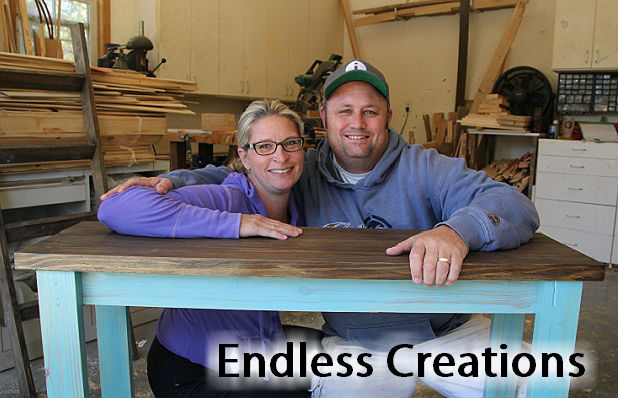 A year ago, Jon and Kim Lindholm’s marriage wasn’t like a Hallmark Christmas movie.

“I was ready to walk out,” said Kim who felt like she was a single mother to their three children: Kirstin, 16, Jarred, 13, and Khloe, 6.

The problem, as Jon himself readily admitted, was work — too much of it, and at the wrong time.

A captain in the Winston-Salem Fire Department, he was working a second job like a lot of firefighters do who work their one-day-on, two-day-off schedule.

Jon’s second job was serving as an analyst in the cardiology department of a large hospital. Between the two jobs, he was almost never home and when he was, he was so tired he’d often fall asleep over the food Kim cooked, or just sitting in the chair.

“I was detached,” Jon said. “I’d sit and vegetate, turn off, and wanted to be left alone.”

It wasn’t exactly the recipe for a happy marriage. But all wasn’t lost, however, as it never is for those who trust in the God who specializes in making the impossible possible.

His unique rescue plan for the Lindholms, who had even tried 18 months of marriage counseling, was a business.

It all began last Christmas when Jon made a TV console for his mother in New Jersey. He made a sports locker for his son, Jarred, too, for the baseball and other gear used for his AAU baseball and school teams.

Kim posted Jon’s handiwork on Facebook Marketplace and a woman in Thomasville asked if he could make a blanket ladder: a piece of furniture that leans against a wall and that people use to store couch throws and other blankets when not in use.

Thus was born Endless Creations, which became Jon’s new second job in May. He made the decision in part from the encouragement of the same Thomasville customer who ordered the blanket ladder. She and her husband had themselves stepped out in faith to launch a business years before.

Jon quit his hospital job to “come home” in more ways than one.

“I called Kim and told her as I was leaving the fire station one day that I had the resignation letter written,” Jon recalls, “and ‘I just have to hit the send button.’ ” When he got home, the letter was off, and the act of faith was made.

At nearly the same time, Kim had found someone selling a used table saw online and bought it for Jon.

Jon and Kim work when the kids are at school, take turns dropping them off and picking them up, and don’t let Endless Creations conflict with their family.

“When the kids come home from school, we do our best to try to shut it down, and have organized our work around our family which is the priority,” he said. “So we have prep days, and stain days.

“I never thought our common bond was a workshop, and never thought she was interested in dust and dirt,” Jon said. “For me, the job change I made showed how important it is to be present and engaged. Now, I can run up to the bus stop and get Khloe and do things for my family that I never could before.”

Kim and Jon work side by side in their garage workshop on every piece. Kim does more of the fine detail painting and measuring, and Jon more of the cutting.

With no advertising, and only postings on Facebook Marketplace — when their phones ding, they joke, “That’s the sound of money (an order)!” — Jon has made enough to not need to find a different part-time job.

They’ve even opened up a small retail space at The Picket Fence in Greensboro.

“God has given us what we need, and each month, we’ve been able to pay our bills and do the things we needed to do financially,” Jon said. “Through our business, we’ve learned how to be marriage partners and business partners.”

“It’s been amazing for our marriage,” added Kim who considers Endless Creations a ministry — just like Jon does.

“What I enjoy most about the business is the ability to minister to the people we sell to or meet through our work,” she said. “One day while we were working in our garage with the door up, the FedEx guy stopped by with something. He was a teacher who was moonlighting and he told us he was working extra. He was tired and in a bad mood but we talked to him and shared a bit of our story.

“He went away in a different frame of mind and told us, ‘I am so glad I met you guys today,’ ” Kim said. “There are so many people hurting and struggling with things we don’t see because we tell each other ‘I’m fine,’ instead of revealing what we’re really going through and that we’re not.”

Added Jon, “We want people to know it’s OK to admit you don’t have it all together, and need the help of the one for whom no problems are too big for Him to handle — God.”

The couple did not chose the name “Endless Creations” by accident but from a heart of gratitude to God and the kind of boundless love referred to often in scriptures like Psalm 103:17:

“But the steadfast love of the LORD is from everlasting to everlasting on those who fear him, and his righteousness to children’s children.”

Kim and Jon say their business and newly re-established marriage are a testament to God’s enduring love.

“God’s love is an always-and-forever kind of love,” Kim said. ”Regardless of what either of us said or did at times, His faith has been enduring in our marriage.”