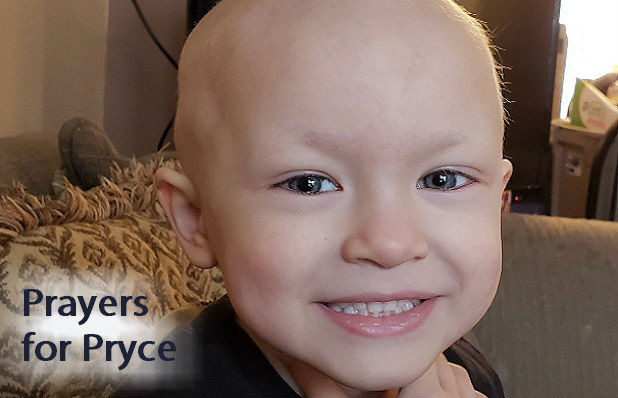 Pryce Redmon’s family knew something was wrong when they saw the normally active 3-year-old watching his four older siblings play instead of joining in the fun.

Instead of arthritis, the blood work and other tests revealed Pryce’s muscle and other pain came from neuroblastoma — a rare type of cancerous tumor that almost always affects children and begins in the adrenal glands atop the kidneys where the neuroblast cells are most often found.

With stage 4 disease, his extended family — which includes Triad Baptist members Miriam Stanley (grandmother), and Katherine Trotter (his aunt) — is adding their #prayersforpryce and hoping for a miracle.

Half of the proceeds from the Titans’ home basketball stand against the Community Baptist Conquerors — $1,019 — went to Pryce and his family.

Previous beneficiaries included the families of Steve Jones, who died of cancer in 2017, and cancer survivors Lisa Ledwell and Hunter Thompson.

“The fact that so many came out to support our family is amazing,” said Ben Redmon of the assistance for Pryce, his youngest child. “It’s always something to see when the family of God comes together to be the hands and feet of Christ.

“We can never repay the kindness and generosity shown to us by the people at Triad,” he added about Cancer Awareness Night. “We just thank them from the bottom of our hearts and praise God for using them to help our family during this time.”

Since Pryce’s diagnosis on Aug. 10, 2018, he’s endured five rounds of chemo, surgery to remove tumors, and one round of combined chemotherapy and immunotherapy.

Up next for his son, Redmon said, is another round of combined immunotherapy and chemotherapy at Mott, and another scan to see if he is body is rid of enough cancer cells for doctors to make back-to-back stem cell transplants.

Doctors removed Pryce’s main tumor and some affected lymph nodes in one surgery.

“He has tolerated everything pretty well,” Redmon said. “He has experienced minor side effects, such as hair loss, nausea, and loss of appetite. They are monitoring his hearing and sight, as the drugs he takes can have long-term effects. His last scans showed the cancer had shrunk in some areas, but grew in one area.”

In the video, Stanley said God had known about Pryce’s illness and the family’s trial long before he was born, and was walking with them through the ordeal.

“Through this,” Stanley said, “God has shown me that His grace is sufficient and I can trust Him with my grandbabies even in the most horrible situations, because it will provide opportunities none of us would have ever had to share the gospel with others.

“More than ever, I intentionally look for those moments now,” she said. “And to know God loves Pryce and that he and all of our family, are part of God’s divine plan, is humbling. God is so good and His mercies are new each day!”

Even before the game and surprise support, Stanley said Triad already had rallied around her and Trotter. A group of members also paid for them to travel to Lake Orion, Michigan, to see Pryce in September.

“ I told his other grandmother I didn’t think he would make it through the weekend without stronger pain meds because he was in so much pain from the cancer load in all his bones,” she said. “His bone marrow was 100 percent cancer, and they did have to take him to the hospital the next day after we were headed home”

Of the Cancer Awareness Night benefit, Stanley said, “This latest support just amazes me. I have such a wonderful church family. That’s all there is to it. I have gone through cancer myself twice in the last 10 years, and have had a lot of other things health wise that have happened and my church family has always taken care of me.”

Over and over again, Redmon said he and his wife, Katie, have seen God demonstrate His presence through the love of others, including a mid-December visit and Christmas party for Pryce and family by Detroit Lions’ quarterback Matthew Stafford and his wife, Kelly. Pryce’s favorite gift was the tickets and sideline pass, and a giant Mickey Mouse plush toy.

“The amount of love and support we have received has been humbling,” Redmon said. “It means so much to us that we aren’t going through this alone.”

“God has used His people to come alongside us when we needed it most; whether it was bringing us a meal, sending a note in the mail, or sharing encouraging scripture,” he said. “Each of those acts may seem small by themselves, but they are a big reminder that God is with us and cares about what we are going through.”

“Please keep your prayers coming. We try to let people know specific prayers requests we have throughout the different stages of treatment at ‘Prayers for Pryce’ on Facebook,” Redmon said. “Pryce also always enjoys getting mail, whether a card or coloring page. Write him at: 3442 Aquarious Cir., Oakland, MI 48363.”