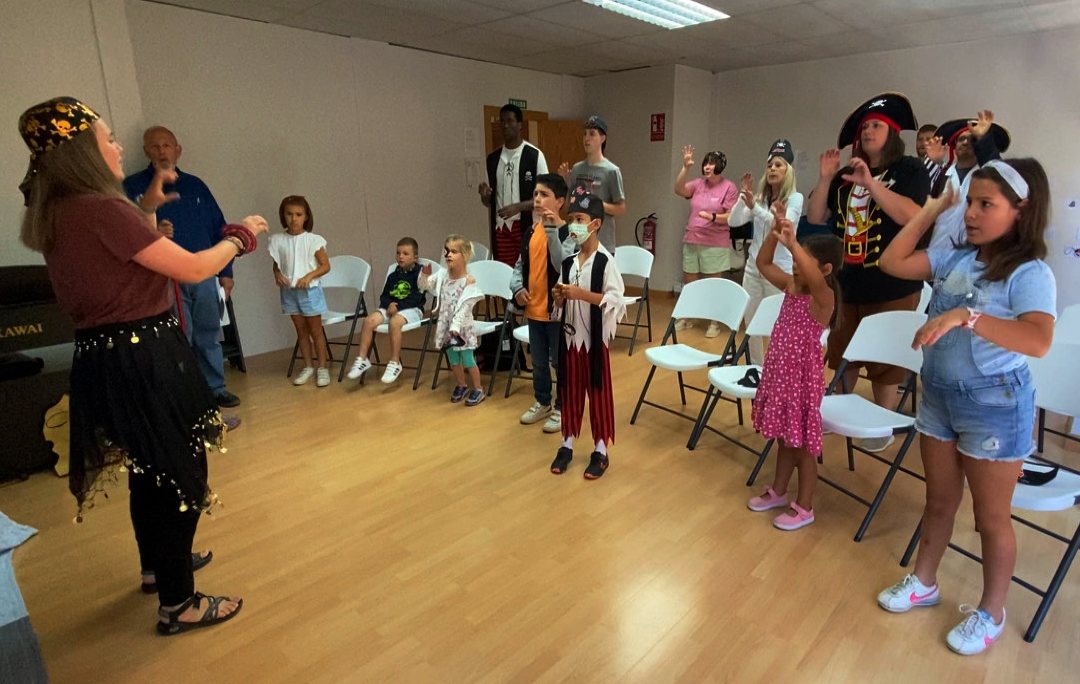 Mary DeHart won’t be at a loss for words when her classmates at Western Carolina University in Cullowhee ask her about what she did this summer.

It was a whirlwind of service for DeHart — an elementary education major and aspiring teacher.

She’d only planned to travel to Spain with her mother, Dana, and other members of a Triad Baptist Church mission team and work at a child-care center.

But God had even more experiences in store.

“The only part of this summer I had planned before summer was the Spain Missions Trip but then Mr. Tim (Gerber, executive pastor for children and ministries), asked me to be a penny captain and lead a group of third-grade girls for Vacation Bible School and then also go to Blowing Rock to serve as a counselor for the Junior Retreat for grades 3-4,” DeHart said.

“Through these experiences, I learned that God will seek you out and use you for His glory when you are least expecting it,” she said. “My summer of service and experiences in Spain, at VBS, and in the mountains were not accidents but part of God’s plan for my life.

“I felt so alive this summer yet drained but it was one of the best summers I had had in my life. I want to continue to grow closer to God, and my summer of service has only motivated me to do that even more.&rduo;

DeHart said the Christian example of her parents, Chris and Dana, and their decision to make Triad Baptist Church their faith community home, looms large in her spiritual development and the unforgettable 2022 summer of ministry.

The power of a church community

While she had accepted Christ as Savior in the fourth grade, DeHart entered her middle school years struggling over questions of self-worth and identity.

“I just felt I had nowhere,” she admitted, “but my parents would still wake me up every Sunday morning to go to church and be part of the youth group. I am so thankful they did that.”

Along with her parents, DeHart’s said the influence of the Triad Baptist church community was vital to help her recognize and end an unhealthy relationship in high school and rediscover and deepen the one she’d begun years earlier with Jesus Christ.

“The summer of my freshman year in high school, my parents asked if I wanted to go with the youth on a mission trip to the Bahamas and I decided, ‘Why not?’ ” she said.

“After that trip, it felt like there was some kind of weight on my soul.”

A trip with other Triad Baptist youth to the MFUGE camp the next summer at North Greenville University in Tigerville, South Carolina, identified that burden.

“God found me in a place of vulnerability and willingness for change,” DeHart said. “I recommitted my life to God and instead of just believing in Him and knowing I was a sinner I started to also see what a good father God was to me and that I had to build a personal relationship with Him.”

She traces the zeal for service and openness she has about sharing her faith today to one particular MFUGE moment.

“That Thursday night, the speaker said, ‘You have a purpose and God has a plan for your life,’ and a fire was lit inside of me. I just knew and still know that was God’s way of calling me to missions. I have a calling in children’s ministry as I am studying elementary education at Western and know that’s where I belong serving.”

‘The pickle girl’ and other ministry moments

DeHart said her summer of service touched her life and heart in many ways.

While in Spain, she dressed up like a pirate and led children in worship — teaching them motions she’d learned to the songs herself right before leaving the United States.

At the same church, she got to share her testimony and hear the Spanish translation of her salvation story in Christ. She also got to serve in two different churches alongside missionaries and see one church that was just beginning and another much further along in its ministry work.

At Vacation Bible School, she served as a captain of the girl’s team in the program’s penny march competition against the boys. Since her team lost, DeHart got doused with a Gatorade cooler filled with nacho cheese, sunflower seeds, pickles, popcorn, Orange Fanta soda and ice water.

The crowd laughed and cheered when she good naturedly picked up one of the pickles and took a bite. “I still have people come up to me and ask, ‘Hey, aren’t you that pickle girl?’ ” DeHart said.

But her sweetest memory was witnessing the Holy Spirit’s work in the life of one of the third-graders she helped lead.

“There was a moment after a lesson when I looked over at this little girl and noticed she had tears in her eyes,” DeHart said. “Instead of asking her what was wrong, I just asked if everything was OK and she responded with a sniffle, then a smile and then a ‘yes.’

“I knew God was moving in her heart, and that just encouraged me the rest of the week to continue being a leader for the girls and example for them when I was onstage.”

DeHart’s summer of service ended not long after Vacation Bible School when, as a counselor for Kids Street Ministries’ Junior Retreat on the Blowing Rock Assembly Grounds, she saw God’s handiwork again.

She could see how God was using the devotion she led one morning in her cabin and woke up the next with an invitation: to their morning devotion time.

“It was an incredible moment that last morning because it was them pursuing that time with God on their own, and they didn’t need any encouragement from me to do that.”

A life and light for good

No matter where God had her serving this summer, DeHart went about gossiping the gospel and talking about what Jesus had done for her — putting into practice what one of her Triad youth group leaders, Sonja Eads, had once taught: How to be intentional and actively look for opportunities to tell others about Jesus.

Not surprisingly, DeHart’s life verse, Isaiah 60:1, strikes the same theme: “Arise, shine, for your light has come, and the glory of the Lord rises upon you.”

She plans to do just that at Western Carolina through her Campus Outreach ministry there, and everywhere else God takes her in the years ahead.

“It is important to serve because in serving others, you serve God,” DeHart said. “Everyone knows that love is not seen through our words but through our actions. What better way to spread His love than to impact someone else’s life!

“And the great part about serving is that it not only changes the people you serve but it changes you. You learn so much more about Him and yourself and what the Lord wants for you,” she said.

“With my summer of service, I know that one day I will see how those experiences not only impacted my life but the children I got to spend time with so they could grow closer to Him. I want this light I’ve been given to burn as bright as it can so that Jesus Christ can reach others through me.”