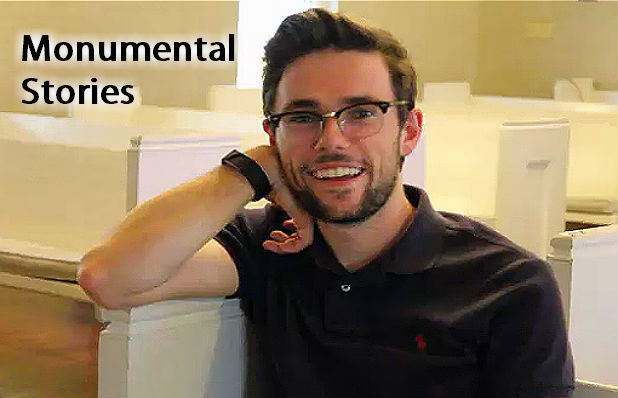 God had other plans.

Not long after he arrived, the worship leader Hurst was supposed to serve under was fired. Then the pastor dropped another bombshell: In addition to leading worship, Hurst would lead the church’s “Shipwrecked” Vacation Bible School, too.

To make matters worse, the air conditioning went out in the sanctuary so the VBS had to be relocated to the church’s fellowship hall.

“I remember thinking how much I was going to need the Lord’s help,” said Hurst, who earned his commercial music songwriting degree from Liberty University in May. “I had suddenly become Mr. Tim (Gerber, executive pastor for children and outreach) and now all that responsibility was on me.”

He soon learned why Gerber tells the kids things like “Signs Up!” from the VBS stage, how many people it takes to make the ministry happen summer, and the importance of delegating, and of leadership.

“We had about 30 kids which was great for a church of 80 people,” Hurst said. “Each night, I could see in the children’s eyes how our ‘Shipwrecked’ theme and stories brought Jesus Christ to life in a powerful way.”

Hurst’s own Vacation Bible School legacy had begun at Triad in 2000, when, as an almost 3-year-old, his parents signed him up for “Amazing Amazon.”

His dad, Steve, built the waterfall for the display — the last VBS held in what is now Triad’s Activity Center (and the site of its first sanctuary) — and his mother, Jessica, led VBS craft time for years.

As he got older, Austin would help his mother with the crafts — scouring the aisles of Michael’s for picture frames and other items and preparing them for the growing number of children as Triad’s VBS became a summer staple. It grew so large that a morning session was needed so more children could come.

“It was a lot of work but a lot of fun opening up picture frames and putting the holders on the back, attaching the foam sticker policemen and firemen like we did for the ‘Rescue 911’ VBS, or helping my mom make stuffed animals from socks,” Hurst said of his craft-time experience.

As his sister, Abby, would do after him, Hurst also served stints as a penny captain in the boys vs. girls competition to contribute pennies used for children’s ministry.

“My favorite consequence as a kid was seeing the losers slimed in the Slime Machine,” he said. “That was pretty cool — especially seeing someone in your own family get slimed!”

When his own team lost once, Hurst said he’ll never forget one child’s reaction before a water hose washed away the smell of the consequence he endured.

“He came up to me with this horrible look on his face like I had just experienced the worst thing ever and said, ‘I’m so sorry you lost. I will bring more pennies next year!’

“His mom was standing right there, and she said he wouldn’t leave until he had come and told me that.”

Hurst said God used VBS and a host of Triad ministries and opportunities to prepare him for service in worship ministry. Those include being able to play keyboard for The Crossing middle school ministry band and Triad Worship Band, and leading worship during a 2015 mission trip to Costa Rica.

He hopes to use business skills honed from buying and selling things since he was 10 years old to help lessen the financial burden for the church he serves through music.

“I want to take as little as possible but give as much as possible,” Hurst said.

While the Hurst family spiritual heritage runs deep — Austin’s dad’s father is a pastor in East Bend, his mother’s mom is a missionary, and the entire family has served abroad on mission trips — Hurst said his experience leading VBS himself last summer gave him a new perspective about the ministry.

“It was so enjoyable to see the kids each night as they sang the songs, did the motions, and learned about Jesus Christ, and to see the dynamics between them and which kids were leaders,” he said. “I remember as a kid how fun VBS was. Experiencing Jesus should bring joy. It should never feel like a drag to learn about God.”

One of the highlights for Hurst at the VBS he led was seeing parents who did not attend church follow their children to church the first Sunday after VBS.

“I had seen this same thing happen at Triad before but being in Mr. Tim’s shoes helped me see even better how truly monumental VBS is: It’s a ministry that doesn’t just reach the kids, but their parents too.

“They might not hear about Christ at their house but if they hear about Him at Vacation Bible School, God can and will use that to change the life of their family forever.”