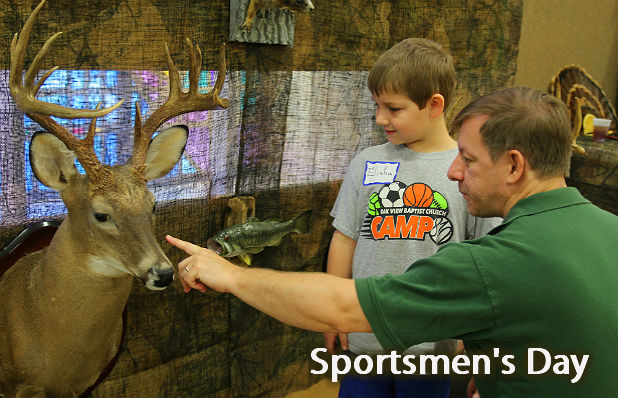 A U.S. Army infantryman for seven years, Sam Shepherd spent more than his fair share of time in the brush.

On Sept. 29, he attended the first Sportsmen’s Day at Triad Baptist Church to figure out how to get back to the woods — but this time to create hunting memories outside with his sons, Elisha, and Matthew.

“It’s been so long since I’ve been hunting that I knew I needed to brush up about hunting and learn before my boys came of age so I’d be ready to take them out,” said Shepherd, who lives in High Point.

“My wife and I have been looking for a church, and she knows I’ve been wanting to get back hunting, so when she saw this on the website, she told me about it. She thought it might be something I could take one or both of the boys to, and would be interested in.

Elisha, 8, was glad his dad took him to Triad since he came home with one of the top door prizes: a hunting bow.

Allen Lakey, a hunter who attends a church in Winston-Salem, particularly enjoyed the workshop on hunting with thermoscopes. But Lakey said all the presenters were excellent as well as the food — bison, elk, rabbit, and venison prepared by Triad Baptist member, hunter, and chef Jim Dumont.

Lakey also won a gift certificate for a $350 rifle in the raffle for door prizes.

“I think programs like this are great,” Lakey said. “A lot of men will come to something like this because they love hunting who would never just come to a church.”

Award-winning outdoor writer, author, and former pastor Steve Sorensen — whose work has appeared in “Legendary Whitetail,” “North American Whitetail,” “Outdoor Life” and other publications — took attendees back in video, photos, and words to an Alaska hunt in 1999.

He and his late brother, Andy, not only killed two moose on the same day that year in Alaska, but at the same time. Along with the grueling hike back to their camp with the moose antlers and meat, they had to clear a rocky patch of land so a pilot could land and takeoff to pick them up.

Sorensen’s listeners soon learned what made the hunt and memory especially poignant as the story took an unexpected turn: Andy died March 24, 2008 of complications from Brugada Syndrome — a genetic disorder of the heart’s electrical system that can cause sudden ventricular fibrillation (when the heart beats too quickly) and death.

Given such conditions and all those he battled daily, Sorensen’s doctor told the family there couldn’t be “intelligent design.” The bodies he treated were just too broken.

The remark took Sorensen back to a conversation in the 1970s he had with a campus pastor while a philosophy student at Eastern Nazarene College in Quincy, Massachusetts.

With the nation divided over the Vietnam War, with violence on campuses, with an energy crisis sending prices soaring, and with scandals seemingly breaking out everywhere, the pastor asked, “What do you think we can do about it?”

Sorensen, noting that nation faces similar turmoil today, remembered the pastor’s answer: “Nothing. The only person who can heal the problem that comes from sin in the human heart is Jesus Christ.”

He accepted Christ as his own Savior that day, Sorensen said, and, years later, played the pastor to his brother’s doctor, reminding him that God made everything “very good” but the disobedience of Adam and Eve — not God, the designer — is what brought sin and brokenness into the world.

Jesus, His own son, was God’s rescue plan to return creation to His perfect design.

“The world as we know it is broken, and that’s why we need a redeemer,” Sorensen remembers telling the doctor shortly before his brother’s death. He recalled how the Bible says that all creation “groans” for the day when God will make things right (Romans 8:22), and when sin and suffering will be vanquished and no more.

“Redemption only comes through Jesus Christ,” Sorensen said — urging his Sportsmen’s Day audience not to wrongly seek it instead through politics, or retirement savings, or exercise, or hobbies, or education, or career, or any other source.

“We were pleased with the turnout for a first-ever event, and one man even came from Hickory,” Ferry said. “It was a real team effort. Our goal was to connect people to Christ through something they’re passionate about — hunting — and give them practical information on a host of topics that they could draw on as they hunted.

“From the surveys we asked folks to complete, we know we did that — people spoke very positively about the nine workshops, food, displays, and Steve’s presentation — and all the Christian hunters who came said they left encouraged in their faith, too.

“We’ve already begun planning for our next TBC Sportsmen’s Day to be held in the winter of 2020 to avoid fall hunting and football seasons.”