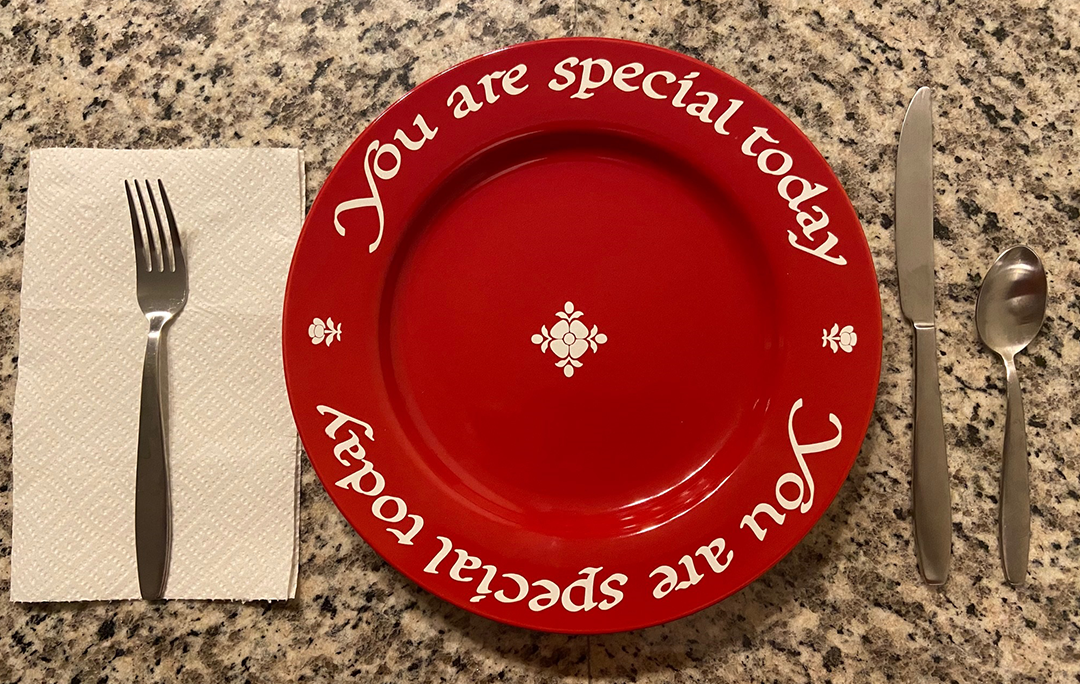 “You are special today” declares the most unique wedding gift I’ve seen.

Sharing her family’s own tradition, my daughter Hannah’s friend Kelsey gave her and her husband, Chris, their own “Special Plate.”

After receiving one on the red plates on their wedding day, Kelsey’s parents used it to celebrate birthdays and other milestone moments – a good report card, an extracurricular accomplishment, a new job, a pay raise, a promotion or other honor.

Whatever the case, and only on that day, whoever was blessed enjoyed dinner on the Special Plate.

Today, we live in a world that delights in making people feel anything but special.

Employing a host of new technologies and tactics that didn’t exist in my childhood, the world mocks, belittles and scorns daily to proclaim our ordinariness and insignificance.

It’s no wonder that so many people feel so unloved and broken that the Brookings Institution estimates deaths of despair to opioids and suicides claimed more than 1 million lives in the U.S. alone in a little over a decade before COVID.

Perhaps even more alarming, a U.S. Centers for Disease Control and Prevention report said suicides among children and those aged 10 to 24 rose 57% from 2007 to 2018. The pandemic has only worsened this toll.

However, like the Special Plate’s message, there is hope that I want anyone reading this to consider who feels unloved, unworthy, alone, rejected or underappreciated.

I’ve felt all myself and can still remember the sting of the words “I don’t see you that way” one day when I had excitedly inquired about a job I thought I was qualified for.

Years earlier, the writer of the anonymous letter I received at the Winston-Salem Journal clearly felt as downcast as I did that day driving home. The letter posed a searing challenge: Tell me why I should go on living so unloved.

The gravity of the matter was clear, and Kelsey’s Special Plate gift reminded me again of the theme of the response I penned in my then-weekly column for the Kernersville Journal section.

Even if you feel the whole world is against you and you lack even a single friend to turn to, you’re never really alone, unloved, and unspecial.

You’re special because God made you.

After all, He created you and not haphazardly but with the precision of a master craftsman. In Psalm 139, we read how God “knit” us in the womb and created our innermost being – fashioning a truly individual you from DNA in a process so intricate and amazing that science has only scratched the surface of its wonders.

Yes, you are indeed “fearfully and wonderfully made” in His image and created by the same God who made that beautiful sunrise you just witnessed, or the snow-capped peaks you see in the distance, or those hawks soaring overhead.

In fact, Luke 12:7 reminds us God intimately knows you right down to the number of every hair on your head. And over and over again, He declares that He’ll never leave you or forsake you (Hebrews 13:5).

You’re special because of how God determines worth.

Fortunately, God is not like the clique in high school that accepts or rejects based on its rules. And thank God, He’s not like the political groups and movements constantly shouting at each other these days and seeking to cancel or confirm someone based on fealty to their human and often-selfish agendas.

God doesn’t divide by race, nationality, assets, position, power, the number of social media followers you have or any other criteria (Galatians 3:28). Our identity comes through faith in His son, Jesus Christ. We are one in Him. The fruitful life is not about what you do but all about accepting what He did for you and who you believe He is.

While the world looks on the exterior and the you you’d like others to think you are, God instead looks on the inside and sees the heart and character of the real you that you are every minute (1 Samuel 16:7).

In the 14th chapter of the Book of Luke, Jesus describes His kingdom as a banquet with room at the table for all who believe in Him.

This was blasphemous to the culture of the writer’s day because only the religious leaders and elites from the same race could sit and eat. Everybody else was considered unworthy, unwelcome, and on the permanent do-not-invite list.

You’re special because of what God did to save you.

Because of what we Christians know as sin and the corruption of God’s perfect creation by the disobedience of Adam and Eve in the Garden of Eden, the Bible declares, “There is none good, no not one” (Romans 3:10).

None of us are without blemish. Only God is good.

But oh, what He did to save us anyway!

So valuable and so loved were we by God that on the battlefield we call life He sent Jesus, His own son, into the enemy fire trying to kill us. Jesus died so we could make it across the killing field to the other side and live eternally with Him.

Even more amazing, God made this sacrifice for us “while we were yet sinners” and didn’t love Him in return.

That verse from Romans 5:8 sums up what we Christians refer to as the gospel: God loved, Jesus came, and now we (who accept Him) can live.

A wise friend lifted my spirits one day after another disappointment by reminding me that others’ opinions only hold the power over me and my self-worth that I give them.

How right he was. Never let anyone tell you that you’re nothing. For to God, you’re everything. It’s like the message of the Special Plate with one big difference:

You’re not just special today. You’re special to Him forever.

Back to School in Permanent Ink