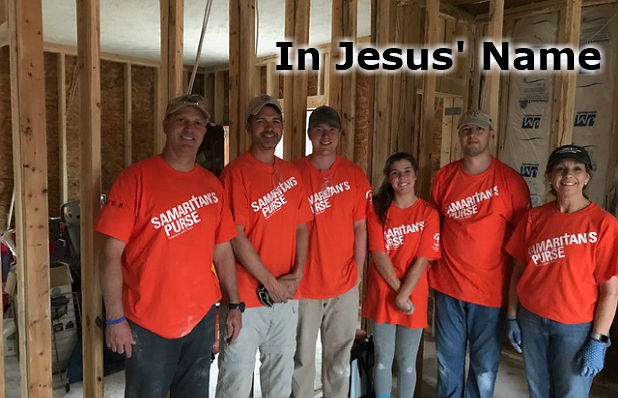 When Hurricane Harvey’s rains swamped Houston, Eddie Hawley felt the tug to do something, anything to help.

But a major operation looming and other obstacles made organizing a relief trip from Triad Baptist impossible then.

Undaunted, Hawley looked for another opportunity to be the hands of feet of Jesus Christ and help someone else get through the storm of adversity.

Then Hurricane Florence swamped Wilmington, N.C., and other coastal communities he knew well from growing up in Eastern North Carolina.

With his wife, Kim, daughter, Lindsay, Scott and Chase Williams, and Will Gibson, Hawley assembled a three-day mission trip with Samaritans Purse. 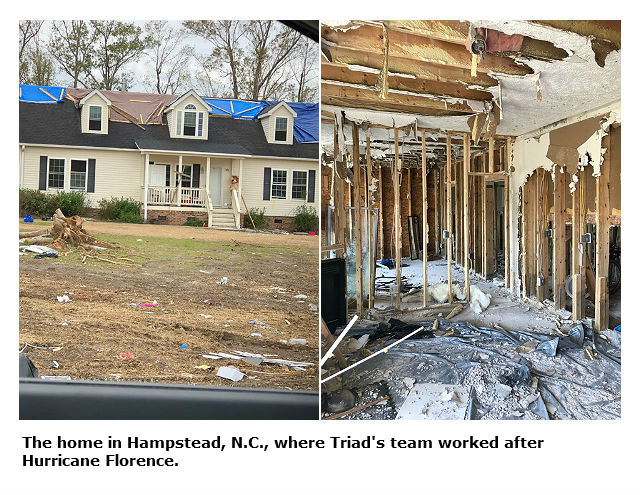 Based out of Port City Community Church in Wilmington, the team served in the community of Hampstead which saw floodwaters as high as 19 feet from water released upstream to keep a dam from bursting.

More than half the time, Hawley said, the crew worked at the home of a man named Greg who had a 3-year-old daughter and was doggedly trying to reassemble the pieces of his family’s life shattered by the storm.

“His house was completely flooded out,” Hawley said. “We tore down the sheetrock to the studs, and got underneath the house and got the insulation out.

“We would get up at 6 a.m. each morning, eat breakfast and have a devotional, gather in parking lot, have a group prayer, and then go to work,” he said.

“The thing that really struck me about Greg was the enormity of what he was facing,” Hawley said. “If you walked into your house and a pipe busted and your whole downstairs was flooded with knee-deep water, where would you begin to clean up?

“He experienced all that and once the water receded, was left with the monumental task to try to figure out how to clean up,” he said. “That would be an overwhelming feeling. Then imagine your entire Connect Group showing up unexpectedly to help and how uplifting that would be.

“That’s what Samaritan’s Purse and its teams do after disasters.”

While Hawley’s team and other volunteers worked a total of 350 hours on the house, they saw the impact of simple acts of service done by total strangers.

The homeowner said little the first day, Hawley said, but he began to open up and talk to the chaplains the second day as he saw the volunteers working on his house — many who had left their own families to help his.

“Samaritan’s Purse is a great ministry in that everything is centered on the homeowner and making sure they feel loved and cared for and know the reason why we’re helping them — in the name of Jesus Christ,” Hawley said.

“At the end, he was eager to have a Bible. Whenever they help a family recover, they present them with a Billy Graham study bible. He was very appreciative and eager to receive the bible and very happy to receive it.

“That’s what I will remember most about what we did — just trying to help and show the love of Christ to people hurting from Hurricane Florence.”

“When you see the damage on the Weather Channel it looks so sterile and when you are there in person all of a sudden you are face to face with the reality of what occurred and realized these are real people who are being impacted,” he said. “Here was Greg having to take out a second mortgage just to get his house back to where it was. 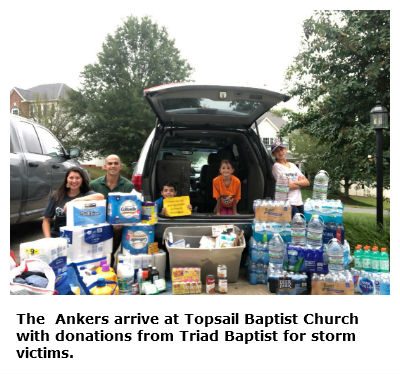 “Any little thing you can do in some small way to help someone, whether it’s tearing down their house so they can rebuild or something else, is a way to show the love of Christ and encourage someone.”

Less than 20 miles away by road but half that distance as the crow flies, one of many churches both hurt by the storm and responding to it had already benefitted from another Triad Baptist Church outreach effort.

Matthew and Jodie Anker and their children Olivianna, Titus, and Sophia, had arrived about three weeks earlier with a carload of supplies donated by Upward Football families and other members.

While Matthew was in the U.S. Marine Corps, the family had been members of Topsail Baptist Church so stayed for a day after their delivery to help friends in the area.

Jennifer LeRay was glad to see the Ankers, and buoyed by Triad’s generosity. She had been Jodie’s assistant in children’s ministry when they attended Topsail Baptist.

The supplies from Triad were distributed at two pig pickins’ and community events for flood victims, including outside the Cross Creek neighborhood in Hampstead that lost about half its homes. 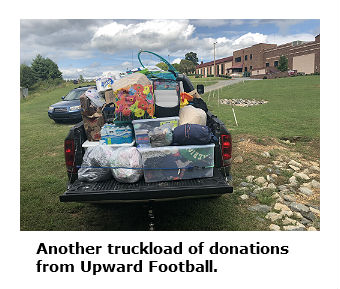 And, LeRay, who helped coordinate those outreach activities for Topsail Baptist, said so much water was donated by Triad families, friends, and others that the church distributed as part of an outreach to West Pender County and rural communities hit the hardest by the storm.

“My husband is a firefighter in Wilmington and we’ve lived here since the 1970s and seen a lot of storms but this is the first time that everybody knows somebody who lost everything,” she said.

“It was such a blessing to see familiar friendly faces like Jodie and Matthew and a blessing to know other people in body of Christ were praying for us and reaching out to us,” LeRay said.

“We were very isolated for several days, and there was no way to get to us. But in the weeks that followed it was so good to know there were people on the outside who cared and called and visited and brought us supplies and showed up for us like Triad Baptist. Thank you!” 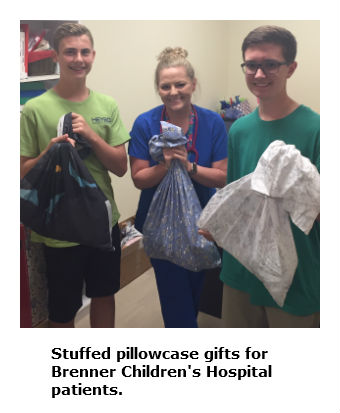 Closer to home, Triad Baptist members continue to reach out into the community. Over the last several months, they’ve: participated in the Greensboro Pregnancy Center’s Walk for Life; put coins in bags at a local laundromat on machines and served snacks and led worship at the Winston-Salem Rescue Mission as Connect Groups; wrapped presents for free at Christmas and helped foster families provide Christmas to children; collected and stuffed pillowcases with blankets, coloring books, hats and toys for patients at Brenner Children’s Hospital; built ramps, decks, shored-up floors, and made other home repairs; and helped an older adult move into a new home.

“As a pastor, it’s such a blessing to see so many efforts large and small by people to live out their faith and truly be the hands and feet of Jesus Christ to someone,” said Lead Pastor Rob Decker at Triad Baptist. “It’s a privilege to lead and serve alongside a people with that kind of heart.”