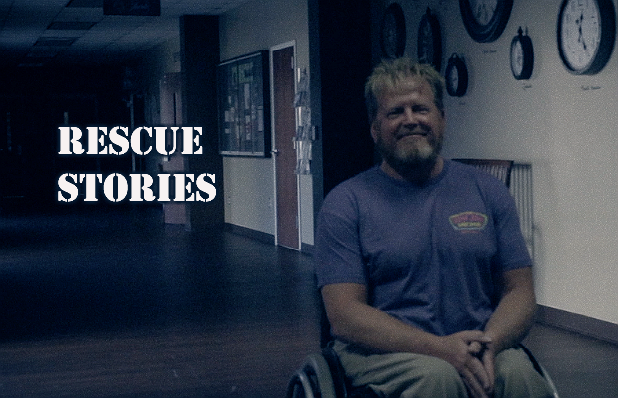 After topping off for gas in Walkertown and passing through Kernersville on the way to High Point one spring day in 1997, he rounded a curve and his motorcycle slowly began to drift off the pavement.

In seconds, he was off the road, into a culvert, and off his motorcycle. His body cartwheeled into a strand of trees where the impact broke his back, pelvis, hips and left femur, ruptured his spleen, and caused other internal injuries.

Doctors at Wake Forest Baptist Health weren’t sure the then-29-year-old father of three would even make it through the night once he arrived.

But he did, and left the hospital 74 days later to start the long road to rehabilitation.

“Sometime during my 74 days in the hospital, I felt the Lord clearly telling me: ‘Here is your chair, and go on about your life,’ ” said Woodall, who turns 51 in August.

He thinks it’s no coincidence that he was asked to consider leading the Celebrate Recovery addictions ministry at Triad Baptist Church after he and his wife, Amy, and family moved from another church in 2008.

He’d been involved in the same ministry at his previous congregation where one of the pastors told him that, precisely because of his accident and outlook on life, people would listen to him more.

Woodall has found that to be the case over and over and believes with all his heart that God allowed the accident so he can tell others about Jesus Christ and his rescue plan of salvation in a personal, and powerful way.

“God has never let me see this wheelchair as what confines me but instead what frees me to bring honor and glory to His name and minister in humility to other broken people just like me,” he said.

Today, Woodall works for a church member’s business. His three children are grown — Seth, 26, Alyssa, 28, and Steve, 30 — and he’s a grandparent.

He and Amy are in the midst of their 32nd year of marriage, and praise God for the accident and aftermath that strengthened their faith, and gave them a story to share to point others toward Christ.

Growing up the son of a pastor who influenced countless lives eternally, Woodall remembers the scene at his funeral in 2006. One by one, mourners stood when asked about his dad’s influence. He’d been the one to tell each about Jesus.

“The Lord said to me that day, ‘What are you going to do with what I have given you?’ ” Woodall said. “For me, I believe it’s to use this wheelchair to be an inspiration to other people. That’s how I am taking up my dad’s torch.”

Woodall said he never has to find the people to talk to. God brings them to him — just as he did recently during his grocery shopping.

“A little girl saw me in my wheelchair and asked, ‘What happened to you?’ ” Woodall said. “Her mother’s face turned red, and I could tell she was embarrassed her daughter had asked.

“But I said, ‘Ma’am, it’s OK, I had a motorcycle wreck,’ and talked to them both and shared my story, just as I have to children and others at Triad. My experience has opened so many doors. Amy and I have told each other often that my wreck is the best thing that ever happened to us because of the opportunity we’ve been given to share what he’s done for us.