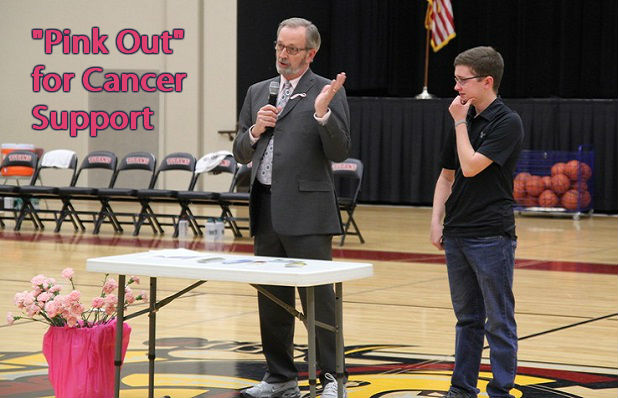 Son of Chris and Melissa Thompson, Hunter underwent a six-hour surgery in August that removed about 70 percent of a brain tumor causing severe headaches.

His words before surgery to his parents — “It will all work out” —sparked Triad Baptist supporters to create orange bracelets with the saying on one side, and Bible verse Joshua 1:9 on the other (“Have I not commanded you? Be strong and courageous. Do not be afraid: Do not be discouraged, for the Lord your God will be with you wherever you go.”).

After successful rehab from a stroke suffered during the brain tumor surgery, Hunter returned home. In December, he returned to surgery to relieve pressure from pockets of fluid in his brain that had caused a seizure, and has since suffered no additional seizures and is doing well.

This month, Hunter will have scans to check on the tumor’s size and to see if the fluid has diminished.

The night-long cancer awareness event and benefit Jan. 26 came during the Titans’ home basketball stand against the Community Baptist Conquerors. “Pink Out” night was scheduled for the national Coaches Against Cancer “Suits and Sneakers Week” Jan. 22-28, 2018 of the National Association of Basketball Coaches and the American Cancer Society.

“Of all the things that we do in our athletic year, I think this is one of the most honoring of God,” said TBCA Athletic Director Robbie Mansfield.

Throughout the game, cheerleaders and volunteers handed out scores of pens, ribbons, T-shirts, and other items donated by the Harbor of Hope cancer outreach ministry of Triad Baptist Church.

“They’ve been wonderful partners with us for ‘Pink Out’ night,” Mansfield said. “We couldn’t do this without them.”

Roberts then welcomed Hunter to half court — where cancer survivors received pink carnations, and Roberts invited fans to join them and stand if they’d also faced cancer or known someone who did.

“It was very emotional,” Hunter said of facing well-wishers, their applause, and financial contributions. “I was thinking, ‘Wow, all these people are helping me.’ ”

Each year, the Titans donate half of all ticket sales — and money collected in two Size 22 basketball shoes — to someone facing cancer. The shoes get passed fan-to-fan by cheerleaders during halftimes, and displayed at the ticket table and concession stand for anyone who wants to slip a donation inside.

In a stark reminder of cancer’s cost, last year’s “Pink Out” night beneficiary — Steve Jones — died Dec. 19, 2017, of cancer at age 45. A Triad member and Triad Baptist Christian Academy supporter, it was Jones who organized the Academy’s first booster club for athletics in 2014.

For “Pink Out” night, head coaches like the Titans’ Michael Bowers (varsity boys), and Bret Yates (varsity girls) join others across the U.S. to don sneakers with their suits to raise awareness about cancer, the resources available for support, and the role nutrition and physical activity play in reducing cancer risk.

Quoting Biblical scholar Matthew Henry, Shuler told the crowd, “Those who are most fit to die are most fit to live” — using Psalm 23 and other scriptures and highlights from his own cancer battle to underscore God’s love and the reality that no one fights cancer alone.

“You’re not alone, He’s (God’s) there, and this is a battle you can fight,” Shuler said.