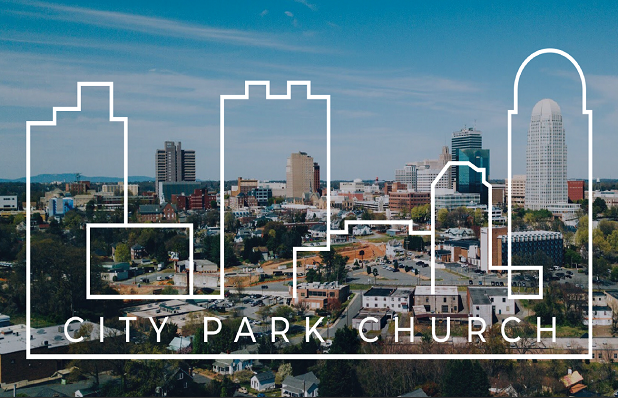 The first church plant in the history of Triad Baptist Church now has a name — City Park Church — and symbol of the Winston-Salem skyline to represent its heartbeat and purpose.

Toby Pegram, who is leaving his youth ministry post at Triad to lead the new church, said the new church’s name references the park of the Washington Park community that is a focal point for residents and efforts to build relationships with them.

City Park Church hopes to hold its first worship service in the community sometime in late 2019.

“Over the time that we have been thinking and praying for the church plant, God just kept bringing the park to my mind,” Pegram said of the church’s name. “It’s a central place where families and singles go to spend time, and where we have met for our prayer walks and gone regularly with our family as we prepare to live there.

“The neighborhood itself also is called Washington Park,” he said. “So the name of the church will be City Park Church. We are a church that loves our city and meets by the park, and believe we will plant other churches ourselves one day by parks since that’s where people are.”

It has been a busy spring for Pegram and Jason Johnson — the deacon on the steering committee overseeing the plant who is leaving Triad with his wife, Julie, to attend and serve on its core team — and others involved in establishing the new church.

From March 11-14, Pegram and his wife, Melissa, joined scores of others at the Caraway Conference Center for intensive church-plant training by experts from the Southern Baptist Convention (SBC).

And then on May 18, nearly two dozen Triad Baptist members went to Washington Park to split into four groups and walk 1.5-mile routes Johnson had mapped out to pray for residents.

The group, which included Triad’s Lead Pastor, Rob Decker, prayed for the people in the homes, apartments, and businesses they passed and what God would do through them and City Park Church.

Following the church-building model found in the Bible’s book of Acts, Pegram said City Park Church is being built on prayer — and not buildings, programs, or personalities.

“It was very encouraging to see people coming out and praying for the community that we are going to love and serve,” Pegram said. “We believe that prayer is the foundation of all church plants, and it is of this one, too. The more we can be over there and pray and be a part of the community, the better.

“It was great for our people to see the area and see that God is working,” he said. “We are seeking God’s direction and looking for how we can jump on board with what He is already doing over there. We have to be in the community and focused on prayer to see that.”

Triad is partnering with the Southern Baptist Convention and church-plant consultant, Old Town Baptist Church Missions Pastor Mark Harrison, to launch City Park and the other church plants it hopes will follow.

Decker said that Triad is working with the SBC in its church-planting program because of its experience helping congregations in North Carolina plant more than 100 churches a year.

Triad is paying the SBC’s Cooperative Program $500 a month, and covering the plant’s budget for its first three years until it becomes self-supporting.

Pegram has scheduled a summer of monthly prayer walks in Washington Park as well as discipleship training for members volunteering to leave Triad and help establish the new church.

The church-plant team also will hold a June 29 cookout for the community in the park, and has printed prayer cards people can use to support the effort even if they do not plan to attend the church themselves.

Said Pegram, “We’ll be using our time together this summer to continue to make and build relationships in Washington Park and further identify the unique strengths and gifts God has provided to help accomplish His mission there through City Park Church.”