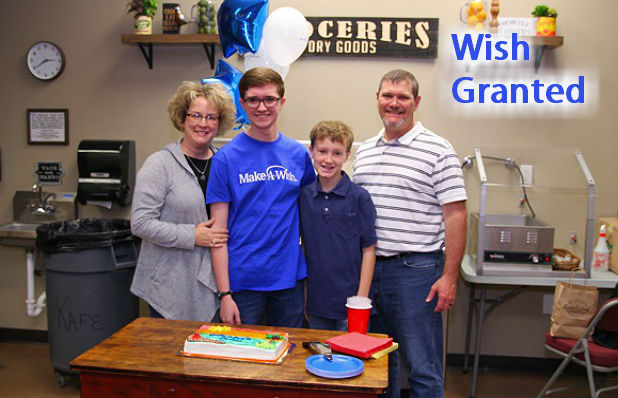 Hunter Thompson had heard enough to know he probably was going to Hawaii on a Make-A-Wish trip.

He just wasn’t sure exactly where or what he’d be doing.

That mystery ended March 31 at Triad Baptist Church. Surrounded by friends and family, Hunter learned from his wish granters at Make-A-Wish that he and his family would be swimming with dolphins and sea turtles off the coast of Oahu, ziplining at the Kualoa Ranch where the movie Jurassic Park was filmed, enjoying the views of Diamond Head from the Sheraton Waikiki on Waikiki Beach, and much more during their April 13-21 trip to the Aloha State.

“I can’t wait,” said Hunter, 16, who was diagnosed with a brain tumor in August 2017 and underwent two surgeries. “It’s going to be awesome. I’ve never been to Hawaii but my friends who have been told me it’s like beach and the mountains all right there in one, and it’s just beautiful.

“The Make-A-Wish reveal at Triad was a real surprise since I didn’t know all the cool stuff we would be doing.”

The Thompsons — Hunter and his brother Ethan, 12, and parents Chris and Melissa — celebrated the official trip reveal with a cake that read “Hunter is going to Hawaii.”

The moment capped a process that began more than a year earlier when Hunter’s oncologist at Brenner Children’s Hospital first nominated him for the trip. Children must be between 2 ½ an 18 years old and have faced a life-threatening illness to qualify for a Make-A-Wish experience.

In May 2018, Make-A-Wish granters Cindy and Johnny McKenzie visited the Thompson’s home to learn Hunter’s wishes, and outline how Make-A-Wish trips work.

A wish granter since 2012, Cindy had asked to personally handle Hunter’s wish since her brother Jonathan Day and Chris had gone to Big Oak Christian Academy in Biscoe, North Carolina, from elementary through high school and remain close friends.

The list of options Hunter outlined for the McKenzies included swimming with dolphins and ziplining in Hawaii, sledding with huskies and seeing the Northern Lights in Alaska, visiting the Grand Canyon, seeing the dolphin rehab center in Florida, and attending the U.S. Open tennis tournament in New York and hitting some balls with one of the sport’s superstars.

“We filled out all the paperwork and asked Hunter what his wish was,” Cindy recalled. “There were several but Hawaii was the clear favorite.”

‘Celebrating Hunter and his physical well-being’

About four months ago, the Make-A-Wish Central and Western North Carolina chapter in Charlotte — one of two in the state and among 62 nationwide — approved the Hawaii trip. Since then, the McKenzies have been planning their return visit to Kernersville and the officially presentation of the trip packet to Hunter and the gift card to the family covering daily meals and other expenses.

“We’re not just celebrating a trip to Hawaii but celebrating Hunter and his physical well-being, and we can thank Jesus for that,” said Johnny McKenzie, who joined Cindy as a wish granter in 2016.

“What I enjoy the most is just seeing the kids and the joy that it brings them,” Cindy McKenzie said of Hunter’s reaction. “These families have been through so much and to be able to bring them a little bit of joy is wonderful. I think most of the time we get a bigger blessing than they do just by being able to offer some hope and encouragement and something for them to look forward to.

“I remember one child in particular that we granted a wish for who was very, very sick. She was ready to give up but she wanted to fight just so she could get that wish. It’s pretty rewarding when you see you can help a family like that.”

Melissa and Chris Thompson marvel at Hunter’s resilience and attitude throughout a medical ordeal that has brought a stroke during one of two surgeries, and a loss of peripheral vision because of the tumor’s location where the optic nerves cross behind the eyes. About 30 percent of the mass could not be safely removed, and so the treatment aims to keep it from growing any further, and to closely watch for any signs of growth.

Because of the vision changes, Hunter isn’t currently allowed to drive.

“Hunter’s prognosis is good,” Melissa said. “His tumor is a level 1 glioma brain tumor and was benign, so, as of now, it is more of a waiting game. They monitor it every six months with MRI scans and will continue to over the next few years to see the rate in which it is growing.

“Chris and I look at it as our son is doing amazing,” she said. “He is back in school and doing many of the things he did before, has overcome so many obstacles, and is a very strong young man. We are so thankful for God’s blessings on him and cannot wait to see what the future holds. We are thankful he is with us and doing amazing.”

The Thompsons are excited about the trip to Hawaii for a host of reasons. It will be Ethan’s first plane ride, and the first trip for all of the Thompsons to Hawaii. In addition to the two tour experiences already booked, they plan to visit Pearl Harbor.

Melissa said they also plan to take plenty of time to relax and decompress after some tough times. For her, that means reading a book on Waikiki Beach.

“This trip will be a great opportunity for us to bond while enjoying a once-in-a-lifetime experience,” she said. “We are simply looking forward to a relaxing family time together in a beautiful location.

“For Hunter, it’s our hope he can utilize this trip to put the worst part of his experience with the brain tumor behind him, and realize now he can move forward with confidence and resume his normal life.”

Added Chris, “We hope he doesn’t see his past as a setback but rather that he has a great story to tell about his journey he has traveled, and still will travel the rest of his life. We hope he uses his story of faith and how it got him through the hardest times of our lives to be an encouragement to others going through trials.”

Hunter has already seen God use his life’s stoutest test as a testimony for others. Like Joshua in the Bible, he’s drawn on his story to encourage others to have courage and keep trusting in God during their own struggles.

It’s the same message he told his parents as he was being rolled into surgery: “It will all work out.”

“God has really used me to tell others that ‘It’s all going to work out OK,’ ” Hunter said. “I have met people having hard times at home and have been able to reach out to them and tell them it’s all going to be OK for them too if they trust in God and let Him lead and care for them.”