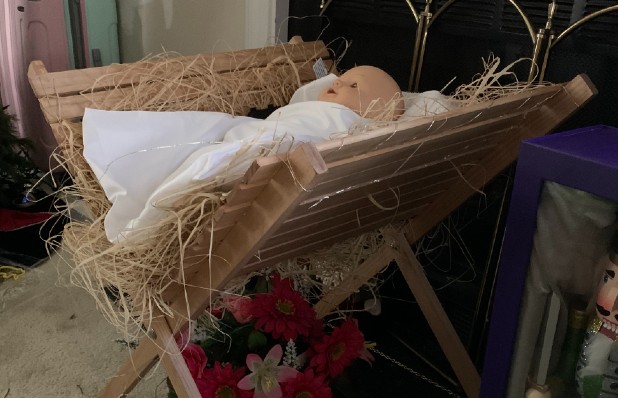 “Away in a Manger” is more than a Christmas hymn for Allen and Theresa Ferry.

It’s a reminder of God’s provision and the origin of the wooden manger that takes the place of the Christmas tree every other year in the Ferry home.

“In the summer of 1981, Theresa and I moved to Texas to attend Dallas Seminary,” said Ferry, a retired Army chaplain, colonel and former pastor.

“Money was pretty tight that first year. Time came for the holidays and I did not feel we could ‘waste’ money on a short-lived Christmas tree,” he said.

“Theresa suggested that perhaps I could make a manger but I didn’t think I had any wood. Then, I remembered that when we moved into the house, I had noticed some wood left in the attic. 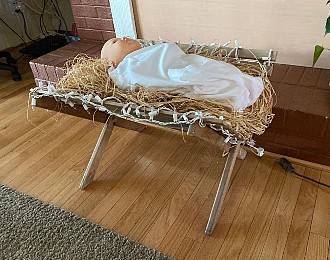 “So, I crawled up the access ladder and found a few small boards. I made measurements, made one cut with a hand saw, and nailed the pieces together into a rough manger (before I later became the owner of multiple power tools).”

Ferry said the handmade manager delighted Theresa and his children Julaine and Mark, then 8 and 10 years old.

“Years later, I made another manager from solid cherry that we have used since, alternating annually with a Christmas tree,” Ferry said.

This was the manager that a visiting family saw this Christmas season.

“Alicia Cone, a dear friend whose husband is our son Enoch’s basketball trainer, commented how much she liked it,” Ferry said.

“They’re such a special family to us, so I made them a new manger that folds up for storage.”

Ferry doesn’t know how many more mangers are in his future but is glad the family manager tradition lives on, adding, “Mangers are definitely more biblical than green trees!”