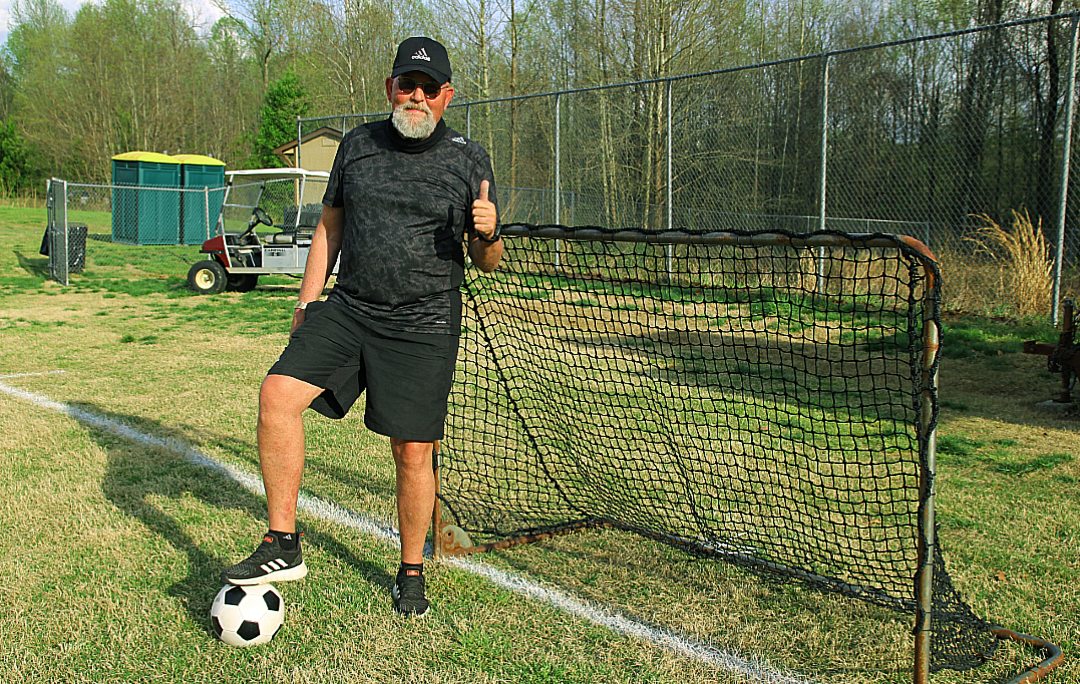 “He had never played soccer before, and I could tell he at first did not want to be there,” said Hamilton, who is bringing the sport back to the church April 17 in a season that runs through June 5.

“By the time he got to the fifth and final evaluation station, he was grinning ear to ear,” Hamilton said. “That’s why I agreed to be the new Upward Soccer director at Triad.

“I’m doing this for the kids. They need to be outside playing and having fun. Upward Soccer is about fun, faith, and football,” he said. “It’s going to be a great season.”

Hamilton’s first experience with Upward Soccer at Triad came during a Wednesday night meeting in 2011 about adding the sport to existing Upward Basketball, Football and Cheerleading programs.

He and his wife, Dona Jo, were dating when they found Triad in 2007 on a search for churches in the greater Greensboro area and began attending. They married in 2010, and Hamilton joined Triad in 2019.

During Upward Soccer’s first run at the church, Hamilton coached teams in 2011 and 2012 before having to step away because of his sales and marketing consulting business.

During a lunch with Lead Pastor Rob Decker in 2020, Hamilton — who has loved soccer since his daughter began playing at age 4 and even traveled the World Cup in Germany in 2006 — asked about the program’s future.

The last Upward Soccer season at Triad was 2018.

“He told me it had been on pause because there was no one to run it,” said Hamilton, who volunteered to be that leader.

He and his volunteer coaches had 90 ready to play in 2020 after evaluations in March when COVID-19 scuttled the season.

“There were a lot of disappointed parents and coaches and kids,” Hamilton said.

Coaches held evaluations March 16 for the 2021 Upward Soccer season — drawing 115 players and 16 coaches for three groups: kindergarten through second grade, third and fourth grade, and fifth through seven grade. The age group with the most players is K-2 with 62.

A graduate of Clemson University, Hamilton never played soccer himself. His first experience with the sport came when his daughter, Wynne, played in a YMCA league at age 4.

His son, Clayton, followed and went further in soccer — playing at the highest levels before switching to tennis and earning a tennis scholarship at Guilford College.

“Wherever you go in the world, the game is called ‘football.’ Only in America is it called ‘soccer,’ ” said Hamilton. “It’s the No. 1 sport in the world.”

That’s why Hamilton already plans to take some soccer balls with him on the mission trip he’ll make this summer to Togo with Shuler and others.

“I love the beauty and strategy of the game of soccer,” he said. “It’s a game of keep away, a game that requires conditioning and smarts, and a game all can enjoy. We’re excited to introduce more to the sport at Triad through Upward Soccer.”