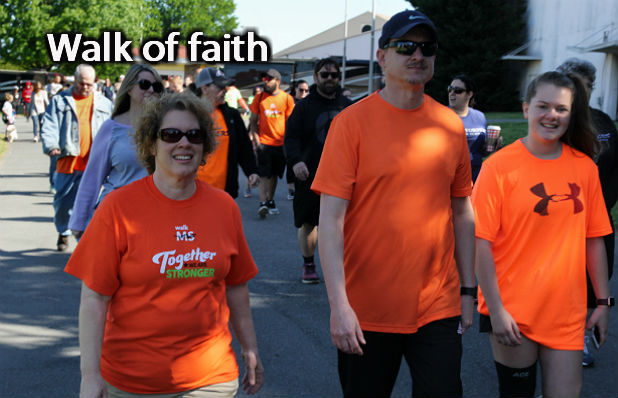 Lisa Crews doesn’t take the ability to put one foot in front of the other for granted.

For her, each day walking the floors of the Stepdown ICU at Wake Forest Baptist Health as a nurse caring for her patients is a literal walk of faith.

Diagnosed with Multiple Sclerosis in 2016, Crews knows the chronic and unpredictable disease affecting the brain, spinal cord, and optic nerves of the central nervous system could one day take her off her feet and leave her unable to work.

A daily dose of a drug known as Tecfidera has kept the vision problems in her right eye and other symptoms from returning — the same ones that took her to the Emergency Room, and after an MRI, led to her MS diagnosis in September 2016.

She got the call while shopping at the Kernersville Walmart.

“The resident said, ‘We got the results from your MRI and we believe you have MS,’ ” Crews recalled. “Since we see the worst of the worst, the first patient I thought of was someone who looked like a pretzel that I remembered and who was in his 70s.”

Later, at an informational lunch and learn, Crews, who is 46, would find herself beside an MS patient in her 30s. “She couldn’t cut her meat because she couldn’t control the movement of her hands, so another person cut her food for her,” Crews said.

“I looked around the table and realize how blessed I am in being able to walk, talk, and do anything I need to do,” she said. “There is such a wide variety of people living with MS and its effects. I know I could lose the ability to move my right leg or muscles tomorrow so just pray every day I’ll be able to continue on and be blessed with continued health since you have no idea where or when it will strike.”

To help bring awareness about the disease and help find a cure, Crew joined millions April 27 participating in Walk MS for the National Multiple Sclerosis Society, which has raised more than $1 billion to date for research.

She walked April 27 at the Winston-Salem Fairgrounds with Burg’s Backers — a team led by Tiffany Burgess, her son Cole’s theater teacher at East Forsyth High School who also has MS.

One of 34 teams represented, Burg’s Backers raised more than $3,226.53 as the top fundraising team for Walk MS Winston-Salem. Crews raised $645 of the total herself as one the walk’s top 15 individual fundraisers.

The 2019 walk was Crews’ second and she said she’ll continue to participate in the annual event and raise money to increase awareness and advance research for a cure and better treatments.

“I walk for awareness since the person who has MS might be someone right down the street who is still walking and appears perfectly normal but who lives each day knowing that could suddenly change.”

Multiple sclerosis is thought to be an immune-mediated disorder, in which the immune system incorrectly attacks healthy tissue and interferes with the transmission of nerve signals between the brain, spinal cord, and other parts of the body.

Most people are diagnosed between the ages of 20 and 50, although children and older adults may develop it.

Worldwide, more than 2.3 million people have a diagnosis of MS. According to a recent study by the National Multiple Sclerosis Society, nearly 1 million people over the age of 18 in the United States currently live with the disease.

Lisa said her faith in Jesus Christ gives her the courage to face MS — a faith tested, shaped, and strengthened even before her diagnosis when she and her husband, Ken, lost their son, Jonathan, on June 10, 2000.

He had been born 15 months earlier with serious heart and developmental issues. In addition to the comfort and hope offered by the Bible verse Jeremiah 29:11, Crews said that she and Ken were buoyed by the words of a sermon Lead Pastor Rob Decker preached at Triad Baptist Church.

“Pastor Rob preached a message years ago when I was pregnant with my daughter, Jennifer (who is 14 now) that said when you worry you insult God. Wow! What a life-changing thought that was for me,” Crews said.

“I remember being worried about the possibility of having another child with a heart defect and chromosomal abnormality like the child we lost. But after that message, I realized how right he was. God’s got this.”

She said living with MS has again proven God’s faithfulness and the wisdom of that advice and helped her trust God more, and worry less about her future.

“When I was diagnosed with MS, Ken and I both said that we believed God had a plan and would take care of us through all this journey would bring,” she said. “He has His plan and He will carry us through.”