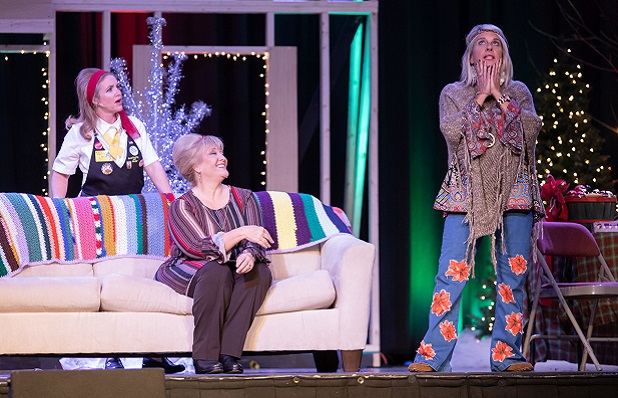 It began with a very personal question more than two years ago, asked by costume director Cheryl Manuel.

“God began dealing with me about my lack of community involvement and how I could get more involved,” said Manuel, who began creating costumes for the church’s dramas in 2015.

“I felt like God gave me the idea of the play as an answer,” she said. “I shared my ideas with Jeremy Chandler (Triad’s creative communications director) and my daughter Heather Still (who leads the music and helps produce ‘A Place Called Home’).

“Jeremy was writing a Christmas drama at the time,” Manuel said. “We did a dinner theater in 2019 and no Christmas special so 2020 was the time for a show built around different families and what Christmas meant to them. I am big on both ‘family’ and ‘tradition’ all year long and not just at Christmas.” 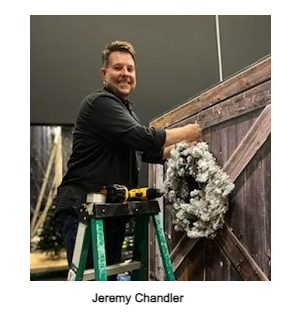 What emerged from the collective brainstorm was “A Place Called Home.” The story tapped Manuel’s and Chandler’s love of family and tradition and wove stories of love and loss together to point hearts toward Jesus Christ and the meaning of His birth.

“Jeremy took my generic and random thoughts and made them specific, entertaining, and thought-provoking and Heather provided the spice by fine-tuning and adding a touch of reality,” Manuel said. “We normally tell a beautiful story but this year told beautiful stories of individuals who live in our neighborhoods.”

“I think my favorite part was the 1960's scene,” he said. “There were little hidden elements and details woven throughout that represented my family. Nanny B was my great grandmother’s name. The elves on the fireplace mantle belonged to my grandmother. The tree was my mom’s childhood silver tinsel Christmas tree.”

“I think the main message of this play is God has always been with us through the years past and present and He will always be there for us today and in the future,” Holt said.

“With COVID-19, I’m also hoping this year that we see how life can quickly change and how we shouldn’t take really important things like family for granted.”

Bussell’s character, Cousin Dot, lives through some tough times — something the special ed teacher sees her own students and families endure often with love, grace, and grit.

“To me, ‘A Place Called Home’ is about how important family is, and how God loves us through everything and all the time,” Bussell said. “I pray that people, no matter what, will love their families and not let anything come between them this Christmas.”

When Bussell and her family joined Triad in 2000, she was pregnant with her youngest son, Nick, and is particularly looking forward this Christmas to having both her boys home.

Bussell said that the show brought back some of her own favorite Christmas memories.

“One of my favorite things I remember about Christmas growing up, is when Jo and I would get a Christmas stocking from our daycare with all kinds of candy in it,” she said.

Whether they saw “A Place Called Home” in person or on the Triad Baptist YouTube channel, Chandler said people told him the show brought comfort and the chance to safely enjoy family-oriented entertainment. 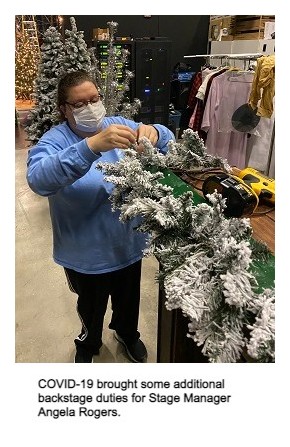 All playgoers 6 and older had to wear masks to and from their seats, the show was ticketed to better control attendance for social distancing, the nursery was closed, attendees were encouraged to limit restroom use, and surfaces were cleaned before and after each performance.

Angela Rogers, the stage manager for “A Place Called Home,” said her third production at Triad Baptist was as different as her family’s COVID-altered Christmas and Thanksgiving plans.

“These are definitely unique times,” said Rogers, who joined the drama ministry team three years ago after learning about service opportunities through her Connect Group small group.

”Our family gathering for Thanksgiving was much smaller and my dad’s family even canceled our Christmas Eve gathering this year due to COVID,” she said.

“Safety was a huge concern for us on the set and Jeremy and his team did a great job. Everyone wore masks the entire time backstage,” Rogers said.

“We were sanitizing props constantly, and also had sanitation stations backstage with masks, hand sanitizer and sanitizer wipes and spray on each side,” she said. “We did our best to keep things sanitized and socially distanced as much as possible. The main theme of each scene is God's love."

By the time the first curtain rose Dec. 4, Chandler said audiences quickly took to the program and its message.

“People were excited to get out of their homes, and comforted to know that we took safety precautions seriously,” he said. “I think people enjoyed seeing different members from the community represented, and I’m sure it encouraged people to consider and talk about their own family’s Christmas traditions and memories.”

In cast member Korie Caccia’s house, Christmas revolves about food, laughter and such traditions as reading through the Bible’s book of Luke throughout December. Being a part of Triad’s Christmas show has become another Christmastime staple. 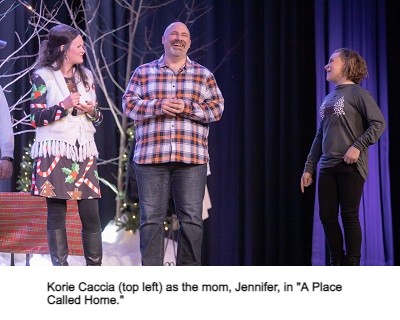 “I first started doing the plays about three years ago to step out of my comfort zone,” said Caccia, who played Jennifer, the mother in the 2010 family scene. “Sometimes it is nice to pretend to be someone else, especially when you are going through a hard time in life like I was when I joined the cast.”

As for the show, Caccia said that the growing number of COVID cases in Forsyth County and constant drumbeat of pandemic news altered the normal Christmas production routine but not the outcome.

“We were definitely more cautious and you could feel the tension at times but it was awesome to see how God continued to provide every step of the way as we delivered His message,” she said.

“Home is where the heart is. It’s about keeping Christ at the center no matter what the world around you looks like. I recently read that worry is belief gone wrong because you don’t believe God will get it right. Peace is belief exhaled. I hope ‘A Place Called Home’ will prompt people to worry a little less and trust God a little more this Christmas.

“Every scene points back to Jesus and the nativity scene at the end brings it all together. Then as now, Jesus is a miracle and gift. No matter the period in time or situation, He alone will save you.”