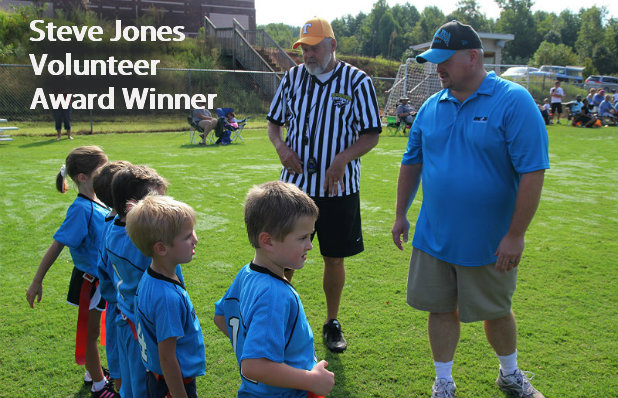 Most weeks, Harold Simcox and his Nehemiah’s Few ministry team are working somewhere — putting in a wheelchair ramp, shoring up a floor, or making other repairs to help the down and out. They’ve done 4,300 since the first project on Thanksgiving Day in 2003.

For nearly nine years, he’s been a mainstay of the official corps, continuing his duties even when wearing a sling on one arm after rotator-cuff surgery.

That kind of faithfulness is why Upward Football director Archie Collins has awarded Simcox with the first Steve Jones Volunteer Award.

In addition to his work getting Triad’s Upward program off the ground, Jones led the team that created the first booster club for Triad Baptist Christian Academy, served as a deacon, and taught youth Sunday School classes.

He died Dec. 19, 2017, of cancer at age 45. Even in the midst of his cancer journey, Jones reminded others that “God was not surprised” by his illness and that he was #blessedbeyondmeasure—a hashtag he used often in social media posts.

Inscribed with Simcox’s name, the award also has Jones’ life verse, Romans 8:18 (For I consider that the sufferings of this present time are not worth comparing with the glory that is to be revealed to us).

“Given the impact of Steve’s life on so many and his example, it seemed only fitting to begin a tradition of presenting this award this year,” Collins said.

“I know when he passed over the reins to me to begin helping the Academy create its first booster club, he sat down with me for more than an hour and a half and told me everything I needed to know to lead the program,” Collins said. “He answered countless follow-up calls from me after that, too. I could not have done it without him.

“Harold’s service to Upward and Triad definitely pays forward Steve’s example, and I’m pleased to acknowledge his heart for the kids and Upward ministry as the first Steve Jones Volunteer award winner.”

In the 2018 season, Collins said 150 children participated in Upward Football and cheerleading.

“We reach about 600 each week when you include their families and friends — many who might never go to church or hear the Gospel of Jesus Christ otherwise,” he said.

One of the Triad Baptist’s charter members, Simcox first experienced Upward Football not on the field, but in the stands watching his granddaughter Amanda Rabey play.

When he saw the program sometimes had difficulty finding enough officials for games, he decided to be part of the solution and volunteered to help.

Since becoming an official, Simcox has become something on an expert on the Upward rulebook and, remembering his own experience as a fan, often explains to fans the penalties he’s calling and what is happening on the field.

While Upward is a close cousin to football and the rules are the same in many respects, most Upward possessions start at the 5-yard line. Plus, there’s no blocking or diving and the quarterback can only hand off or throw the ball to another player.

“As a fan, I know it can be hard to understand Upward rules so when I became an official I made the commitment to keep the fans involved by explaining the movement of the ball and what was a penalty and why,” he said, “ and also explaining to the players if they weren’t sure.”

While he enjoyed watching Amanda play, Simcox said one of the best parts of an Upward official’s job is seeing other children play, and improve.

“I love being out there since it’s just fun being around the kids,” he said. “It’s touching to see players not only develop football skills but show Christian character on the field as well.