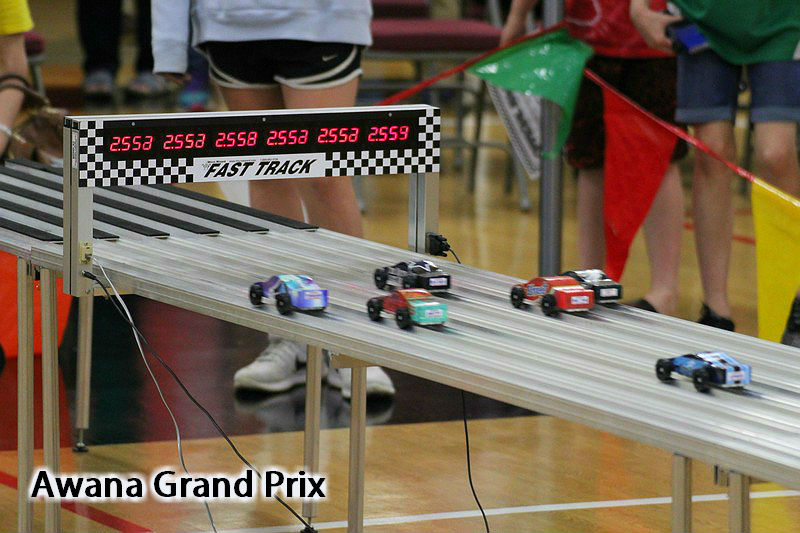 The winners for each Awana club and race division:

The 2018 race brought a new race coordinator in Jeff Chandler – assisted by a core team of Atlas Brooks and Jason Collins. They drew on Dwight Ostrom, Aidan Brooks, and Justin Jones for registration, workshop, and race-day support. Others joining them to help on race day were race announcers Mark Shull and Scott Adamsons and crew members Paul Huffman, Gary Locklear, and Sydney Collins.

Tim Gerber, executive pastor for children and ministries, emceed the race and Kim Gerber and Tammy Thompson tallied the votes cast by the 75 racers competing to determine the design winners.

In 2014, the church secured a new track and software for the race, and added the new Open division that year for previous speed category winners in any category.

This year, Chandler and his team added a large video screen facing the crowd in front of the start line so they could see which cars were racing, and, afterward, who won.

A smaller monitor behind the track allowed Chandler and other Awana Grand Prix support team members to see the same data to determine the lane positions for each car.

“Daryl (Burnette), Austin (Needham), and Steve Jones took amazing notes which provided a template to follow, and made it a lot easier,” Chandler said.

Another new addition was a staff race where the Awana Grand prix team built cars using the same template for Lead Pastor Rob Decker and other members of the church’s staff. Kenny Laubach designed each car for the Staff division race won by maintenance director Wayne Welch. His car sported a design honoring his favorite NFL team, the Dallas Cowboys.

Will Browning, 4, and his dad, Zach, had fun participating in their first Awana Grand Prix race and added another NFL team car to the race field.

Next year, Adeline Browning, who also attends Triad’s preschool, will be old enough to join Will as a racer.

“Will watched the race last year, and this year, he definitely wanted to be part of it,” said Jessica Browning, Will’s mom.

“We went with the Packers design because he’s a Packers fan and green is his favorite color,” Zach Browning said. “It was a good experience and a fun time. He really enjoyed the overall excitement of the race and the experience.”

“It is a blessing to see our leadership team work together with parents and each other as they follow Jeff’s impeccable servant leadership,” he said. “And it’s a blessing to see our clubbers enjoy family time with their parents and how fun and fellowship can help apply the Biblical truths as children learn through the scripture memory and teaching each week provided through the Awana program and our volunteers.”