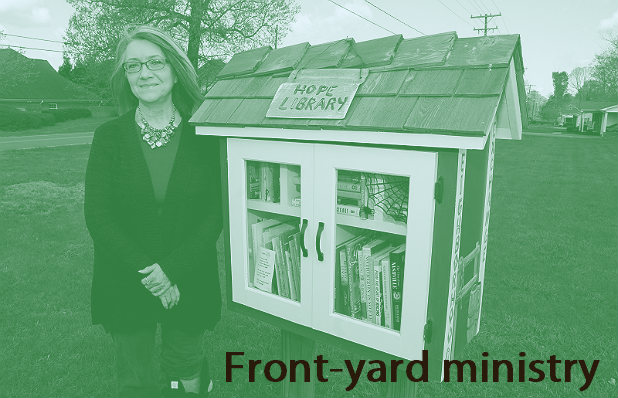 Miriam Stanley was born in the small Canadian village of Hampton where most of the 1,000 residents knew about Jesus Christ because of her father’s witness and the backyard bible clubs her mom hosted in their house.

Thirteen years after the death of her father — who brought his family to the U.S. in 1961 when he enrolled at Piedmont International University — Stanley has found another way to continue the family’s faith-sharing tradition.

Opened last summer, it’s a little library in her front yard called Hope Library. Anyone can open its doors and get an inspirational book inside for free (and replace it with one of their own for Stanley to review and consider adding).

“I named it Hope Library so people would ask, ‘Why did you name it that?’ ” Stanley said. “My response is, in a world of turmoil and uncertainty, my hope is in Christ! In fact, the second day after my library was put up, two ladies in a truck stopped and asked me that very question. That leads to an opportunity to be a witness.

“Sadly, too many times, we don’t see the lost people all around us,” she said. “I put out chairs around it because I want people to know I’m here, interested in their lives, and want to talk to them.

Born into a family of readers

As neighborhood pocket libraries began to pop up around her — a Kernersville dental practice has one of the most prominent ones just off Mountain Street — Stanley thought, ‘What a great way to show Christ to my neighborhood!’

“I already put toys out occasionally for children to play with while they waited for the school bus each morning since the bus stop is right by my house so thought this would be an extension of the principal of ‘reaching just one’ in my neighborhood,” she said.

Tim Gerber, executive pastor for children and ministries, loved the idea, and helped Stanley get Hope Library approved by the Executive Leadership Team and deacons as a ministry. He also advised her to contact Simcox about getting the first one built.

Since Hope Library is a book exchange, Stanley said, she tries to select books that would reflect well on the church and her own character. She inserts an age-appropriate gospel tract into each book, and also put a “Hope Library” sticker on each book has the church logo and tbcnow.org website address.

“It has helped me get to know neighbors and I’ve had all ages use the Hope Library,” Stanley said. “One neighbor sent me a text with a photo of her kids sitting in the chairs I have out and reading, saying, ‘Best bus stop ever!’ I have even seen a cable company van parked there and the worker looking for a book to read.

“My goal is to show love to my neighbors and in doing so create relationships that the Lord will use and further the gospel.”

Interested in adding a Hope Library in your neighborhood?

Contact Stanley at mim2eight@triad.rr.com or call the church office at 996-7573.