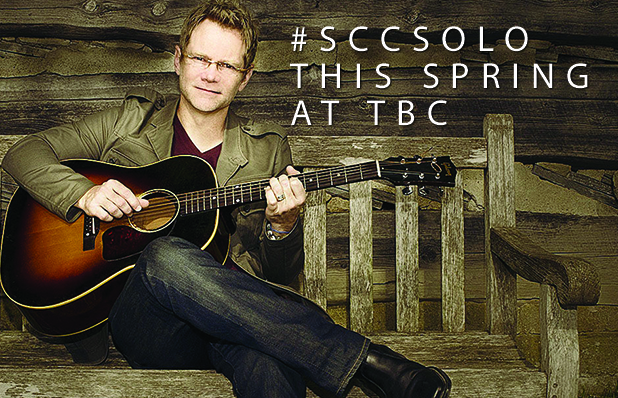 Triad Baptist built its Worship Center/Gym with performance in mind: music and drama to point lives toward Christ.

While good experiences that drew plenty of audience, Creative Communications Director Jeremy Chandler said the church decided to build and learn from those experiences to take concert promotion in-house and stage a spring concert.

Two years in the making, the result is Steven Curtis Chapman’s April 7 tour date at Triad. Get your tickets now. Gold Circle ($40), and General Admission tickets, which includes bleacher seating ($20-30), are still available. Tickets can also be ordered by phone: 1-800-965-9324.

Chandler said the church has sold more than 550 tickets already, including a sellout of the $80 VIP tickets offering preferred front-row seating and an opportunity to meet Chapman backstage before the concert. Triad’s maximum seating capacity is 1,300.

Adoption advocate, and winner of five Grammy awards and 58 Gospel Music Association Dove Awards — more than any other artist in history — Chapman is performing in Kernersville during one of only two stops at churches in a tour that begins Feb. 3 in Allen, Texas, and ends Sept. 22 in Maui, Hawaii.

Chapman’s hits include “I Will Be Here,” “Cinderella,” “For the Sake of the Call,” and “Heaven in the Real World.” He’s sold more than 10 million albums.

His April 7 concert at Triad will follow a Feb. 16 concert at the church featuring Vertical Worship in partnership with Piedmont International University. Order tickets now for that event.

“We actually began planning for this new spring concert and our first concert promotion in-house in January 2016, and were considering Steven Curtis Chapman or Michael W. Smith — for the broad appeal of their music, its content, and their character,” Chandler said.

“Unfortunately, both had other events planned so we weren’t able to make it happen,” he said. “I knew Michael W. Smith would be in Greensboro for his Christmas tour in December, so last September, I emailed Steven Curtis Chapman’s management company. They did have some dates available, I took the idea to the pastoral staff, and here we are.

“We’re excited about the concert and opportunity to again open our doors to the community, and Steven Curtis Chapman and his management company couldn’t have been better to work with,” Chandler added. “Since this is a learning experience for us, we’re not necessarily looking to make money but cover our costs and establish a foundation — including for the budget — to do this once a year on an ongoing basis.”

Chandler said he knew the church made the right choice when he and friend Nick Decker saw Chapman perform while visiting the Ark Encounter in Williamstown, Kentucky.

“I thought it was a great show, which covered 30 years of hits, and his testimony — which is so powerful,” he said. “It was acoustic, just like our solo show will be, so there were not a lot of big bells and whistles.

“Programs like these offer people another way to hear the gospel in a different setting than a traditional worship service. Steven Curtis Chapman has a fantastic story that people need to hear.”

Chandler said another $1,500 in rental equipment and some other enhancements were required for the concert — all covered through the current budget. But in 2019, he expects to request more for concert promotion and audiovisual rentals and other costs to make it even easier for the church to work with future artists and hold events.

Beginning with the spring concert, Triad Baptist plans to use the events to promote community ministries of the church. Because of Chapman’s experience with adoption, Chandler said it will highlight the “Loving the Least of These” support ministry for foster and adoptive parents.

“That was a natural fit for us since Steven Curtis Chapman is a big proponent of adoption, his tour is sponsored by Show Hope, a movement to care for orphans, and we knew Loving the Least of These with their connections could help us promote the event and help make more people aware of the need for foster and adoptive care and support.”

Chapman's faith story: "I could sense Jesus knocking on the door of my heart."