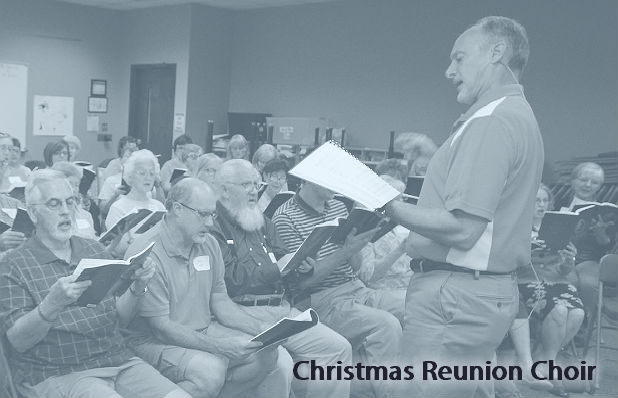 Diane Vaughn is adding a new song — her voice — to an old tradition as the Triad Baptist Church performs a Christmas concert Dec. 10.

She’s one of those singing in the new “2017 Christmas Reunion Choir” created by music director Scott Compton, to perform 10:45 a.m. Sunday, Dec. 10, at the church’s traditional service and again that evening at 5:30 p.m.

At the Christmas Reunion Choir’s first rehearsal Sept. 3, Vaughn and more than 20 people (former choir members and new members) joined the current choir for the first of several weekly practices.

First performed by Triad’s choir in 2012, the musical, “And on Earth, Peace,” retells the Christmas story and the hope Jesus Christ brought to a fractured and dying world as its Prince of Peace.

The choral presentation follows the Dec. 1-3 drama (7 p.m. nightly) of —Merry and Bright—’ the church’s third original production since the move into its current Worship Center/Gym. (Watch Connections and tbcnow.org for more about the drama in an upcoming feature story.)

“In the past, I had always been part of a music ministry Team or choir but hadn’t participated in either since coming to Triad about three years ago,” Vaughn said. “I have missed it, and this seemed like a perfect opportunity to jump back in. I am looking forward to praising God with the group, and meeting new people in the process.”

The choir’s living Christmas tree had been a fixture of the church’s Kernersville Christmas Spectacular musical until choir concert and drama were combined into one presentation after the move into the Worship Center/Gym.

“Our dramas have been original productions and at times it’s been challenging to find choral arrangements of songs that fit the theme,” said Scott Compton, the choir’s director. “There was also the pressure to fit in enough choir songs to justify the time and effort to include the choir in the production. With this year’s changes, we now can expand our Christmas opportunities by having both the drama (heavy on the drama but still with some music) and the choir concert (heavy on the music but with narration and minimal drama).”

Choir member Diane Pearson is glad to see so many new faces in the choir room.

“When we joined the TBC choir years ago, we sang traditional choral music that had great harmonies, and great messages in the songs,” Pearson said. “The Christmas and Easter choral music was especially this way — music that encouraged the heart and delighted the ears.

“To have a full choir singing great choral arrangements is a sound that I think many at TBC are excited to hear again.”

“I think it’s a real positive for the church,” Simcox said of the return of a choral concert at Christmas. “The traditional Christmas cantata type of program — that style of music and performance — still has a place in the church today so I’m glad we’re getting back to it.”

The choir’s “And on Earth, Peace,” concert includes 11 songs, with narration and a brief message by Lead Pastor Rob Decker will follow the 50-minute program.

Compton cast a wide net to assemble the 2017 Christmas Reunion Choir, including 66 letters sent to those who had been in the church’s choir at any time since 2000.

“The response has been tremendous,” he said, “and, in our second rehearsal, some of those who came back to rejoin the church brought others with them. I know of at least one person whose mother (who previously had not been in church) came to see her perform as the result of a choir concert, and came to know Jesus Christ as Lord through it. She tragically died not much later.

“I shared that story at our first Christmas Reunion Choir practice to underscore the importance of what we’re preparing for and God’s power to use the story of His Son’s birth — and the scripture this music is based on — to change lives.”