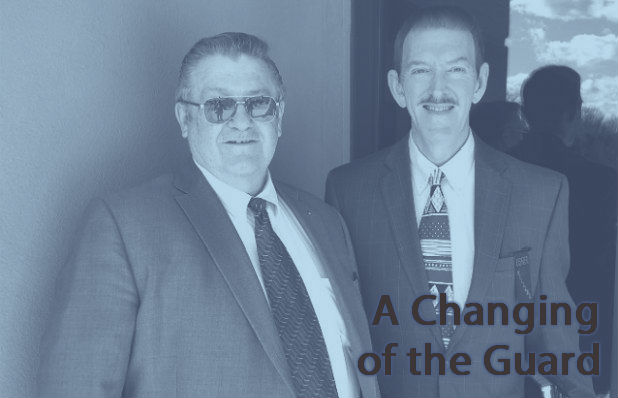 Richard Johnston had never led a ministry when someone recognized his faithfulness performing a vital role at the church, and asked if he’d teach others how to follow his example.

Nearly 18 years later, Johnston’s friendly smile and handshake and calm demeanor are still on display each week at Triad Baptist. While he still serves as an usher, he recently handed over the leadership reins for the Usher Ministry as a whole to Jim Bumgarner, who joined Triad with his wife, Sharrie, in 2006.

Triad’s Usher Ministry leader provides overall supervision and direction to those serving in both the contemporary and traditional services.

“We had tried for at least five years to find someone who would be interested in taking over from me, and then about a year and a half ago, Jim expressed a willingness,” Johnston said. “After much conversation, prayer, and some training, we worked with the Nominating Committee to make it official this year, which included the recognition by Pastor Rob (Decker) in a service. Jim is a far more qualified and organized leader than I ever was. He is doing, and will continue to do, an awesome job.

“I am still an usher and really like meeting folks at the door so Jim schedules me there,” said Johnston, who first joined Triad with his wife, Volree, and family in 1988. “As it says in Psalms 83:10, ‘I’d rather be a Door Keeper in the House of the Lord, than be found in the house of the wicked.’ ”

Johnston said he considers key attributes of a successful usher to include a desire to serve God by serving others, and the kind of ‘how do you do?’ and ‘may I help you?’ friendliness that people remember.

“Our ushers and greeters are the first people seen by visitors,” he said. “Statistics show that over 85 percent of people who visit a new church determine in the first 10 minutes that they’re on the property whether they will return. We have a great responsibility to make sure they want to come back.”

At any given time, Triad’s has about 60 to 70 ushers who serve on a rotating basis at its contemporary and traditional worship services. Like Johnston, however, Bumgarner has served nearly every Sunday for more than seven years.

Like Johnston too, he considers the usher ministry a vital part of Triad’s worship services, and growth overall.

“I think the Usher Ministry (in part) is responsible for the growth of our church,” Bumgarner said. “We have huge buildings with a lot of people. If visitors coming into this environment do not feel welcome, have their questions answered, and are not assisted to their seats, the music and sermon could pale due to those bad experiences.

“The Usher Ministry is successful due to the dedication of the ushers and leaders that willingly volunteer their time and operate efficiently under the model that Richard established,” he added. “In any church, there are many leadership styles, personalities, and levels of devotion. But Richard is a ROCK — steadfast and consistent in dealing with members, always calm in difficult situations, and faithfully dependable with all commitments.”

Bumgarner said the purpose of the Usher Ministry team is to “serve God by providing worshipers a welcome greeting, the ability to ask questions, and to provide seating according to their specific needs or requests.”

It is also responsible for “reverently gathering all offerings that they do not ‘as unto men, but unto God’ ” and for being “watchful over the congregation to facilitate an uninterrupted service for all” who come to praise and worship God.

Asked about his goals for the Usher Ministry, Bumgarner said he wants to build on Johnston’s success.

“Since we have ushers who serve in other ministries, I am currently reaching out to those ministry leaders to utilize crossover volunteers more effectively, and look at how we can better combine or join forces with the Security team and others in the event of an emergency,” Bumgarner said.

Just as Johnston drew on training programs at Northside Baptist Church in Charlotte and ideas from other churches, such as having an Usher of the Month and an annual appreciation dinner, Bumgarner said he hopes to pull in some of the ‘bests’ from others himself as Usher Ministry leader.

“I want to evaluate any specialized training necessary to improve our skills, and have a joint effort with other ministry team leaders to visit comparable churches to review the function of their core ministries and offer a reciprocal invitation for them to visit us at Triad Baptist,” he said.