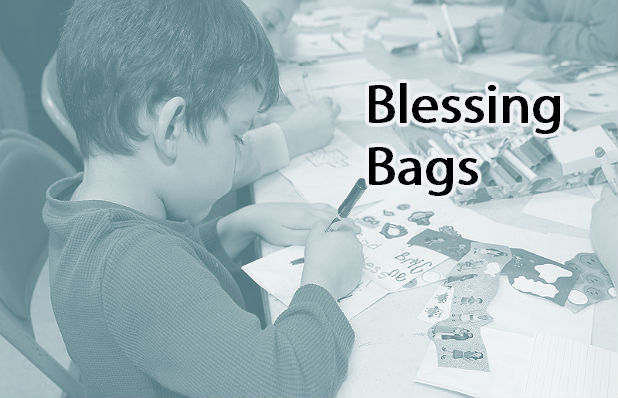 For the fifth year, they followed up a practice and a devotion on kindness with the creation of “Blessing Bags” for players to hand out in the community.

“After each game we give out stars to the players, and one is for Christ-likeness,” Wendy Kluk said. “I felt like the ‘Blessing Bag’ project was another way to teach them to actually be kind to others and think of others before themselves.”

When the Kluks first launched the project five years ago, they coached a team of second- and third-graders. They kept the tradition going when they were asked to coach a team of kindergartners and first-graders.

Parents pitch in to make the Blessing Bag project a family affair by buying all the supplies and helping players spot and act on giving opportunities. The bags are kept in cars so they’re ready to distribute.

Players decorate the white paper bags with markers and stickers, and then take turns going down the supply table to fill them. Each bag gets a water bottle with flavoring plus peanut butter crackers, cereal bars, applesauce, candies, an Our Daily Bread devotional, and a hand-written message on an index card.

Some players write their favorite Bible verses on the card while others opt for words of encouragement. Tracy Goins’ son Cole wrote, “You are very nice” on his.

“He loves it,” Goins said of her son’s first year of Upward basketball and the Blessing Bag project. “The bags are an age-appropriate way to help others and easy way for them to see that they can give back and help others.”

Carolyn Faircloth agreed, as she watched son, Keegan, create his two bags. “It’s fabulous for them to learn giving back to others all while being able to play sports,” she said.

“It’s a great project,” Young said, “and like the Upward Basketball program overall, I think it helps them develop a positive attitude and learn to respect others.”

Over the years, Wendy Kluk said she and Steve regularly hear stories about the bag deliveries before the awards banquet.

“We always tell them to pray for God’s direction about who to give the bags to and enjoy hearing their stories,” she said. “When they do give one away, they will tell us at our next practice, ‘They were so happy. They smiled and said thank you,’ or they said, ‘God bless you.’ It’s great to see them so excited about serving others.”

Although it’s been three years, Wendy Pack said she and her family still remember when their son, Ryan (who is also a student at Triad Baptist Christian Academy), played for the Kluks and made his own Blessing Bags.

“Ryan enjoyed making the bags and carefully chose the Bible verse and contents for them,” Pack said. “For his verses, he used Philippians 4:13 and John 3:16. I think he ended up making three bags which we kept in the car. Two went to people at intersections with signs asking for money, and the third went to a person living on the street in Atlanta when we were on vacation.

“It was a positive experience to be able to give something to someone to spread God's word while providing some water and food to someone in need. Ryan liked being able to help people,” she said. “Ryan enjoyed the project, and learned that helping someone else can make you feel good.”