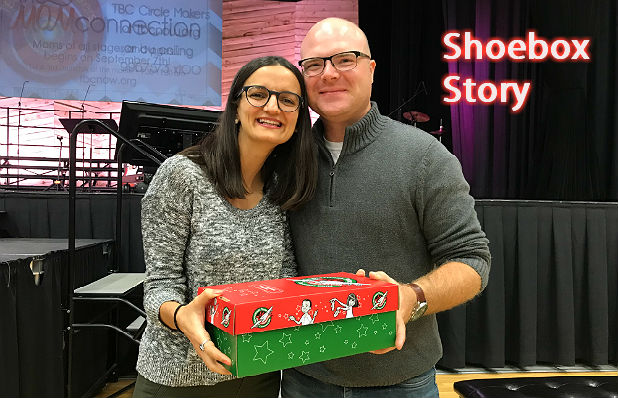 Seven years after the fall of Communism in Romania, the outside world made a surprise appearance in Gabriela Reynolds’ small church of 20 people in the village of Valea Crisului.

A larger church in the area had received a shipment of shoeboxes from Operation Christmas Child of Samaritan’s Purse Ministries, and shared the love.

The boxes were lined up along the altar in a neat row, and Reynolds’ pastor passed them out to each child.

“The borders had not been open that long, and we didn’t get much from the outside yet in post-communist Romania,” she said of the 1996 Christmas to remember, which brought chocolates, a bracelet, cologne, and other items along with the plan of salvation in her language. “It was a huge deal for us and exciting and amazing.

“I remember one of the packages I got had a picture of the people who put it together — it was a little girl and her grandfather,” she said. “To think these people I never met took the time to put something together like that was incredible to me. 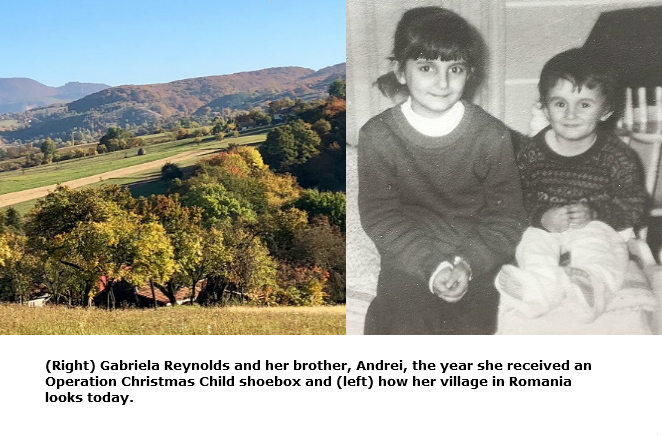 “To experience the kindness of someone whom you never met was such a blessing and brought joy to everyone.”

This year, its Reynolds’ turn. After becoming a new member at Triad Baptist Church Oct. 21, she and her husband, Jason, plan to prepare and send their own shoebox.

They’ve only been living in the United States for a few years and began relocating to the Kernersville area from Ohio last January. Gabriela, a buyer for Volvo Trucks, moved first. Jason, who owns his own dentless repair business, moved in February.

“Our church in Ohio really didn’t do this (prepare shoeboxes) so I’m planning on putting together one,” Gabriela Reynolds said. “I’m excited to be the giver now since I know the impact that these gifts of love have.”

The church will dedicate the boxes collected in this year’s drive on Nov. 18, “Dedication Sunday.”

As they have for many years, Triad Baptist Christian Academy teacher Val Cooper’s third-graders will join Gerber and Charles McPeak Nov. 19 to take the shoeboxes to the Operation Christmas Child distribution center en route to the ministry’s processing centers and delivery overseas.

Use the Follow Your Box page to donate and get the labels for your boxes which will also provide a tracking code you can use to determine where it was distributed.

Over the 20 years that Triad has participated in Operation Christmas Child, Gerber estimates the church has contributed from 8,000 to 9,000 boxes to the ministry.

While great to provide toys and other gifts to children in need, Gerber said what continues to make it a vital part of the Kids Street Children’s Church ministry is the gospel.

“I know the greatest gift — the plan of salvation through Jesus Christ — is going to be in every box,” he said. “That’s the reason why I do it. I know with each shoebox, we’re putting the gospel into the home of a family.”