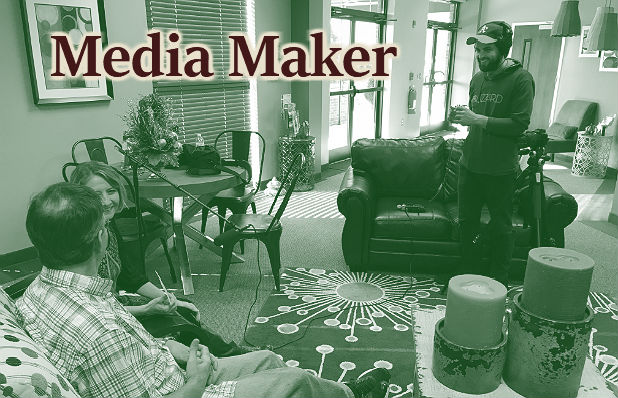 Drew Poplin took a coffee break one day from his efforts to break into North Carolina’s theater scene and didn’t realize something else was brewing: the chance to put his creativity and theater degree from Cedarville University to work for Triad Baptist.

“We had been looking for several months for additional help with KNOWName Media — not just in filming and editing, but also in writing and directing,” Chandler said. “We were also in need of someone to help us within our in-house printing. Drew was looking for a position somewhere that would allow him to put his creativity to good use, so it was a great combination.”

Since then, a host of projects have kept Poplin busy along with KNOWName Media staffers Spencer Cook and Jeff Smith — from videos promoting church ministries for announcements to the advertisement now airing on Spectrum’s cable television to promote “Merry and Bright,” the Christmas comedy opening 7 p.m. nightly at Triad from Dec. 1-3. Watch all the KNOWName Media videos on Vimeo.

Poplin builds on the work of several freelance videographers Triad has used over the years, including Zach Decker, Alec Hutchins, and Devin Purgason.

“Drew has the ‘creative eye’ and the ambition to take KNOWName Media to the next level — something I’ve wanted to do for several years,” said Chandler, who oversees communications both for the church and Triad Baptist Christian Academy.

“We would like to expand our video productions so they become more cinematographic visually, more purposeful and relevant, more gospel-focused, and more appealing to our broad and diverse audience.”

Most of the time, Chandler handles the writing which the other KNOWName Media team members translate into film. But with the “Merry and Bright” commercial, Poplin wrote and edited it, and had Cook filming for him behind the camera since he acted in the spot, too.

Poplin grew up in Hamptonville, North Carolina, and learned about Triad through his parents, Rodney and Tina Poplin — missionaries to South Africa whose supporting churches include Triad.

After graduating from Cedarville in May and finding theater positions tough to find in Ohio, he moved back to Winston-Salem and decided to visit Triad based on his parents’ suggestion.

“I remember being struck by how no one was trying to ‘sell me’ on their church,” Poplin said about his first impression of Triad as a visitor. “I just got the sense that people genuinely loved being here, and was also drawn by the fact that they have a singles class and ministry.”

So far, Poplin figures he’s produced about 15 videos in addition to managing an in-house printing operation that has reduced printing costs and covers everything from the REACH newsletters to visitor cards to large banners and posters for ministries.

Although an actor by training (he majored in theater performance), Poplin considers himself a fast learner who is steadily improving his video editing skills on the job as well as other aspects of his work for KNOWName Media.

“I always have enjoyed movies,” Poplin said. “It was when I started to participate in plays that I realized I had a knack for acting which sort of grew into a passion for film.

“I like to think that what I lack in initial talent I can make up for in passion and the desire to get better.”

Before he starts a project, Poplin said he first tries to identify the vision and purpose for the video.

“If the video is something that I’m creating myself, I find it very helpful to sit down with some music, and try to draw some inspiration from that,” he said. “After the concept has been rounded out, I then sit down and try to storyboard the video so I’m not scrambling when we shoot.”

The actual filming and editing complete the process, which can take up to 20 hours or more for a major project.

“Editing is definitely the toughest part in my opinion and one that I’m still trying to get better at,” Poplin said. “(former KNOWName Media videographer) Devin Purgason gave me some solid advice: he said that by deciding on the music first, you are able to better map out where each clip goes and how long to cut each clip.”

Of all the projects he’s completed to date, Poplin said his favorite was the video promo for the Family Fall Fest.

“It was half footage from last year’s event, and half parody of the movie, ‘The Dark Knight,’ ” he said. “It was probably one of the more ambitious projects we’ve done since I’ve been here because of the many moving parts. I also got to write the script for it, so it was awesome seeing it grow from an initial idea that I thought would be kind of funny in my head to something that ended up onscreen.”

As changes in technology and demographics further heighten the emphasis on imagery and visuals, Poplin believes KNOWName Media is an ideal ministry for Triad at the right time in the church’s growth.

“It’s undeniable that the Bible states for us to not be conformed to the patterns of the world,” he said, “but I also believe that for far too long, Christians have gone to the other extreme and now we’re out of touch with the most people.

“How and what does the current generation think? How can we relate to our fellow man? I believe that the medium of film/video/media is a great tool in reaching this generation of people, but only if we, ourselves are willing to listen since effective communication is two-way. It’s a conversation.” 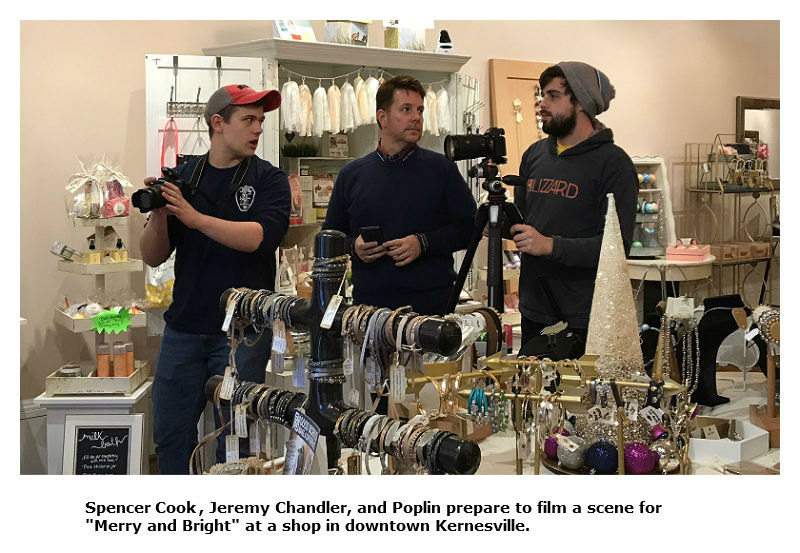