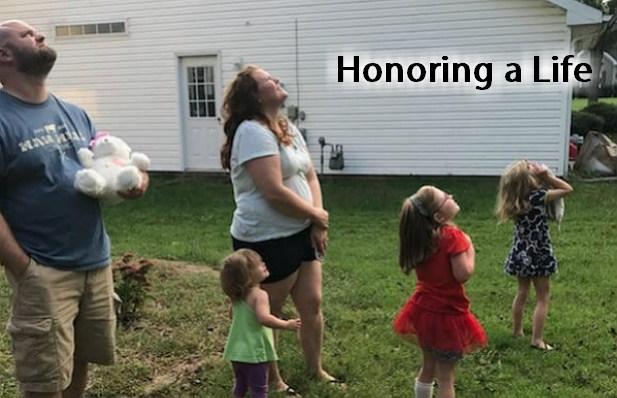 It’s a question Lead Pastor Rob Decker often asks prospective members during the First Steps class of Triad Baptist Church: What are you most passionate about that God could use to reach others?

For Sarah Kilbreth, the answer was Eleanor’s Light — a ministry to support and encourage those who, like her, have experienced a stillbirth, miscarriage, or other loss of an infant.

“One night Pastor Rob was talking to us about serving, and I distinctly remember him saying that if there wasn’t a place that I really wanted to serve, or something that didn't fit my passions, to create it,” Kilbreth said. “After that class, I sat down at one of the tables outside the Awake Cafe and wrote down the beginning plans for the ministry.”

She named it Eleanor’s Light, after she and her husband Joe’s fourth child, Eleanor Rosalie, who was stillborn at 36 weeks in September 2015. The family recently honored her third birthday Sept. 22, 2018, with a balloon release at their home (see photo above at top right) and cake.

“After she passed away, a friend sent me a message of encouragement one day, and mentioned that her name meant ‘light,’ ” Kilbreth said. “This friend of mine was sure that God would use her story to help others.

“Since losing Eleanor — and another baby at eight weeks a few years earlier — I felt very strongly that I wanted to help other women like me who had lost a baby (or babies).”

Kilbreth officially launched Eleanor’s light earlier this summer. Melissa Pegram, whose daughter Autumn, died eight days after she was born and inspired a ministry called Blessed by Autumn, is serving with Kilbreth on the Eleanor’s Light ministry team.

Since starting the ministry, Kilbreth has learned that she and Pegram are not alone.

“I’ve been able to reach out to a few women who have experienced pregnancy loss, too,” she said. “My hope is that through talking with them, sharing my story, and how God brought me through my losses, someone will be comforted and led to God.”

Kilbreth said that there are many ways members can support Eleanor’s Light, even if they have not personally experienced the loss of an infant.

“First and foremost, don't be afraid to talk about their baby who has died,” she said. “Most often, we who have lost babies feel like we can’t talk about them.

“No one asks about them, no one says their name(s), so we feel like we can’t, either. It becomes a huge elephant in the room.”

“If someone you know has had a miscarriage or stillbirth, or lost a baby after birth, just be there,” she said. “Bring them food, coffee, or their favorite drink. Be willing to listen to them. The people most precious to us are those who sit with us in our times of deep grief.”

In addition to Eleanor and the baby Sarah miscarried two years earlier, who she and Joe named Sam (they believe she also was a girl), the Kilbreths have three living daughters — Abigail, 2, Amelia, 4, and Charlotte, 6.

A homeschool mom, Sarah grew up in eastern Oklahoma and met Joe, an IT specialist with Triad Radiology Associates in Winston-Salem, while a student at the University of Arkansas — Fort Smith in Fort Smith, Arkansas.

As for the first Pregnancy & Infant Loss Awareness Day, Kilbreth said that she hoped it offered strength, support, hope, and the love of Jesus Christ to attendees.

“The event on the 13th was one of celebration and remembrance,” she said. “We had a time of fellowship, followed by creating a memento for each baby of those who attended. Melissa and I shared our testimonies of how God has carried us through the darkest times of our lives, and ended the evening by saying the names of each baby.”