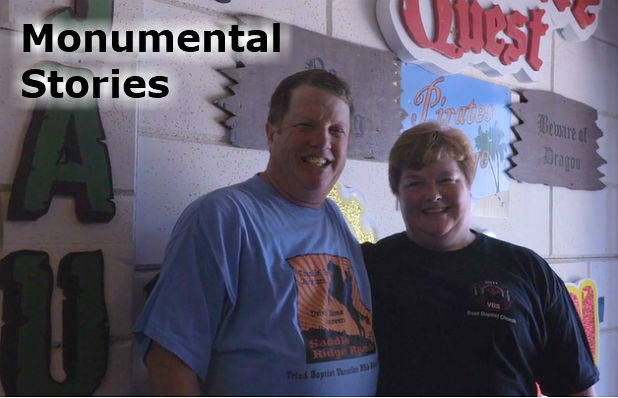 A few days after his physical birthday, Ryan Kluk celebrated his spiritual birthday — all because of Vacation Bible School at Triad Baptist Church.

“We moved here in 2004 from Arkansas and started attending Triad Baptist Church shortly afterward,” said Ryan’s mom, Wendy. “My husband, Steve, and I took Ryan, who has just turned 9, and our two other children to the VBS Triad was having that year — All-Star Champions.

“While I had grown up in church, I had never seen VBS done on that scale before — the sets, the stage, the number of volunteers and children, and the atmosphere, which was electric,” Wendy said. “I thought. ‘Wow!’

“Steve and I were so new to the church but we watched the opening and closing assemblies every day and, like the kids, found ourselves engaged by the set, the songs and motions, and what was being taught about God.”

The Kluks weren’t alone in being touched by what God was doing through Triad’s VBS ministry.

On Thursday, Ryan asked Jason Johnson, one of the leaders at the soccer-themed site, how he could be saved from his sin. Johnson told him, and Ryan accepted Jesus Christ as Savior later that night. 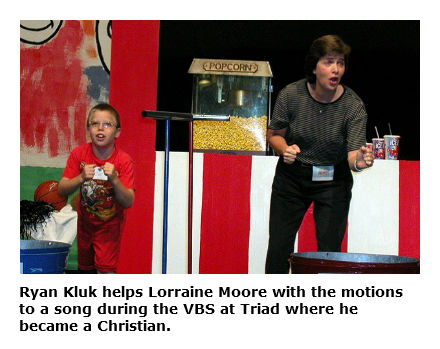 Within a year of VBS, Ryan, his older brother, Tyler, and Steve (a convert to Christianity from Judaism) had all become Christians. They were baptized together at Triad in January 2005.

After their introduction to Triad through VBS, the Kluks poured themselves into the church and its ministries — weathering some serious storms over the years because of their trust in God and support of the church and its leaders.

They’ve been a part of the VBS volunteer team ever since that first VBS they experienced in 2004. Through the years, Kluk family members have held such roles as guide, parking attendant, penny captain, and recreation assistant for games.

One VBS project Steve and Wendy particular enjoy is the VBS adventure ride which they’ve built at their home on Hill-N-Dale drive just north of Kernersville since 2010. That’s when they first transformed the ride’s trailer into a stagecoach for the Saddle Ridge Ranch VBS. 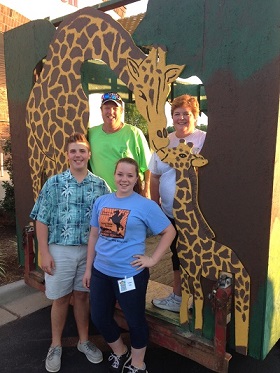 They’ve built jungle animals, a racetrack and car, a castle and other scenes, and once made the trailer look like a prehistoric car straight out of the Flintstones.

“Every year, Tim (Gerber, executive pastor for children and outreach) gets with me in January and tells me the theme, and Wendy and I start brainstorming,” Steve said. “The toughest thing is we have 48 to 72 hours to build it since we get the trailer Friday evening and the VBS starts the next Monday.

“We work all through the night that first night but have a lot of fun doing it.”

Added Wendy, “It’s a family event, and we all pitch in. People in the neighbor have gotten used to see us work each year and will walk by and say: ‘It has to be Vacation Bible School time again at Triad Baptist.’

“They think it’s so cool to watch it come to life in our driveway, and what we’ve built has sparked a lot of conversations over the years.”

The Kluk’s garage has become both a VBS memory lane and monument to them about the ministry’s power to make Jesus Christ known to several generations of children and their families and friends.

Steve marvels at how his granddaughter, Alicia, 5, who is autistic, loves to listen to the Triad VBS CD when the family travels in their car, and has learned every song.

“VBS connects in a unique way because it puts who Jesus Christ is and the Bible at a level that they completely understand,” he said. “It’s right on their level and, being a non-Christian when I first experienced VBS at Triad back in 2004, it was right on my level, too, so I can relate.”

Added Wendy, “To reach that many families in only five days and plant that many seeds and have that many volunteers serving for 25 years can only be God. He’s provided a way for it to happen year after year for His glory.

“I know VBS has had a lasting impact not only on my kids but many others. What it represents for our family is how important and fulfilling it is to make God known one life at a time.”