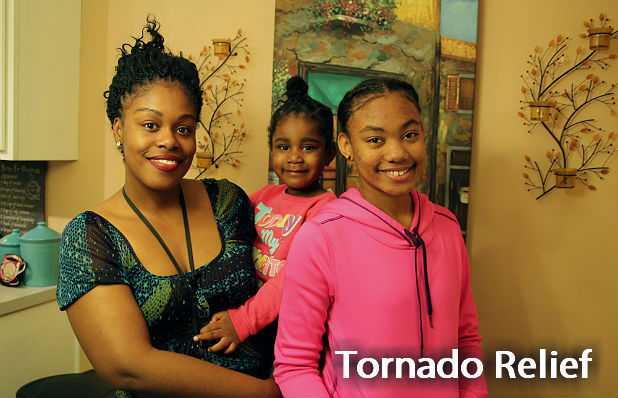 Born on the North Carolina coast, Omeshia Bowens had seen her share of strong thunderstorms.

So as she watched the blowing rain and swaying trees April 15 outside the home she rented on Pear Street in Greensboro, she wasn’t alarmed.

That suddenly changed when a trampoline tumbled down the street — the same trampoline that was supposed to be in the backyard.

A strong burst of wind and rain followed, and by the time tornado warning sounded on her cell phone, Bowens already was making a beeline with her daughters Angel, 12, and Me'Lon, 3, and dog toward the hallway bathroom — the only room in the house without windows. (Her oldest daughter, Ayona, 17, was away as student at Fayetteville State University.)

“We all got in the tub and covered our heads and looked down,” Bowens said. “It seemed like forever but was really only about two minutes. I heard a loud boom and felt the house shaking. Then it went quiet.

“I waited for three minutes since I didn’t want anything to come back,” she said. “I told the girls to stay in the house while I looked around.”

The sight of what Bowens found outside the bathroom took her aback. Items that had been in the kitchen and living room — including the kitchen table — were now scattered outside in pieces.

So was the bay window and other parts of the front of the house. Water poured through gaping holes in the roof, and the floors were littered everywhere with shattered glass and debris.

With the furniture market in town and hotel rooms hard to come by, Bowens and her girls spent their first night after the tornado in the parking lot of her workplace: the United States Postal Service Human Resources Shared Service Center in Greensboro.

An announcement the next day at the Center began to put Bowens and family on the road to recovery. It connected Bowens with a co-worker in a different department she’d never met: Daniel Brown of Triad Baptist.

“Rochelle Israel, the facility manager, came over the loudspeaker at 8:15 a.m. to let us know that an HRSSC family member had lost everything in tornado,” Brown recalled. “I know it was the Lord who put it in my heart to help her. She was in dire straits.”

After getting the permission to talk to Bowens and her OK, Brown put out a call for help to the Doulos Sunday School class. The evening after the tornado hit, he met Bowens in the parking lot of the Walmart on Wendover Avenue with four bags of clothes, and some toiletries.

Bowens remembers the prayer that he left her with as well, plus the New Testament.

“Daniel praying with me that day, and giving me the New Testament gave me a boost since I couldn’t find my Bible after the storm,” she said. (It would take several trips back and rummaging through debris until she found her driver’s license, and Ayona’s diploma and Dudley High School graduation photo.)

A few days later, when a missionary pastor and wife went to stay with friends so the Bowens could live in their Summerfield home while looking for new housing, Brown made another delivery — this time with so many items from Triad Baptist members that the car’s interior was covered.

“I have never experienced so much love and positivity,” Bowens said of all the support. “It has shown me the love of Jesus Christ and what it means when we as Christians love others in times of need.”

While Brown, who grew up in Greensboro and went to school there, focused on Bowens, another Triad Baptist member with Greensboro ties — Tim Wall — also was following news reports about the storm’s aftermath.

After learning about disaster-relief efforts being organized by a Greensboro church one of his children attends through its Peace of Hope Foundation, Wall’s wife Cindy dropped off some donations April 16.

Their reports of the damage and need prompted him to text Triad’s Lead Pastor Rob Decker and suggest a church-wide collection for tornado victims (including students of Triad Baptist Christian Academy).

With Decker’s OK and with the church alerting members to the drive through social media, email, and other communications, Wall, Brown, and about a dozen others set up collection points at the church.

From April 18-29, they collected five truckloads of supplies — from bottled water and baby wipes, to toiletries, antibacterial cleaners, flashlights and batteries, plastic storage bags, and more.

Triad Baptist volunteers took the supplies to Peace of Hope in Greensboro for delivery to Peeler Recreation Center and distribution to residents affected by the storm.

Said Wall of the effort, “Helping others and showing them the love of Christ is what we’re called to do as Christians.”

Past the initial shock of her loss, Bowens is now focused on finding her family a new place to live, and continues to count her blessings and draw strength and hope from what God has already done for her.

“Today is today but I know tomorrow will be even better,” Bowens said. “God blessed us and saved us for a reason. He was there in that house in the midst of everything and covered me and my children. I’m so thankful that God was there for us then and is still with us now.”